ALAMOSA — Since 1979 the San Luis Valley has been carrying on a proud tradition of honoring local football. Local merchant Bob Carlucci was honored at the banquet as he has been a sponsor and a valued piece of the puzzle with regards to organizing the banquet. Carlucci will be moving to Colorado Springs while continuing to have Colorado Sports functioning here in the Valley.
With the 39th in the books Master of Ceremonies Dave Forster commented that for the 40th they plan on inviting all the past All Valley Coach and Players of the year to attend for a welcome mix of past and present. 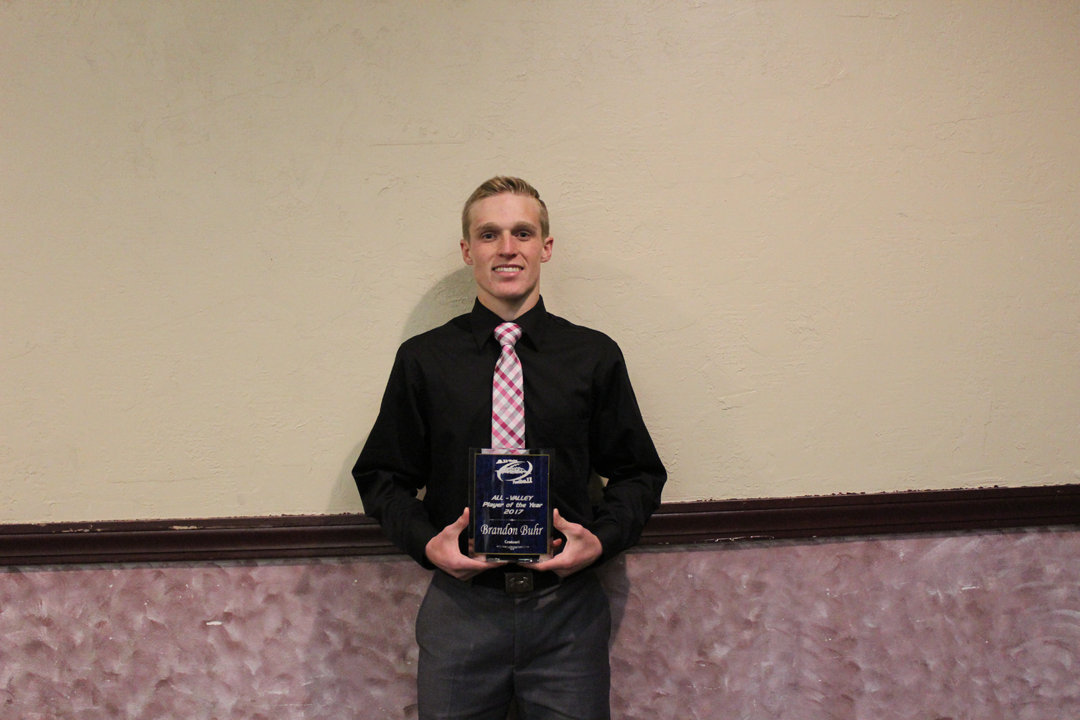 Brandon Buhr of Centauri poses with his All-Valley Player of the Year Award. Buhr was all over the field in 2017. With 6 interceptions Buhr was tied for third in the state. Buhr also tallied  1,397 all purpose yards and accounted for 25 percent of all Falcon touchdowns. 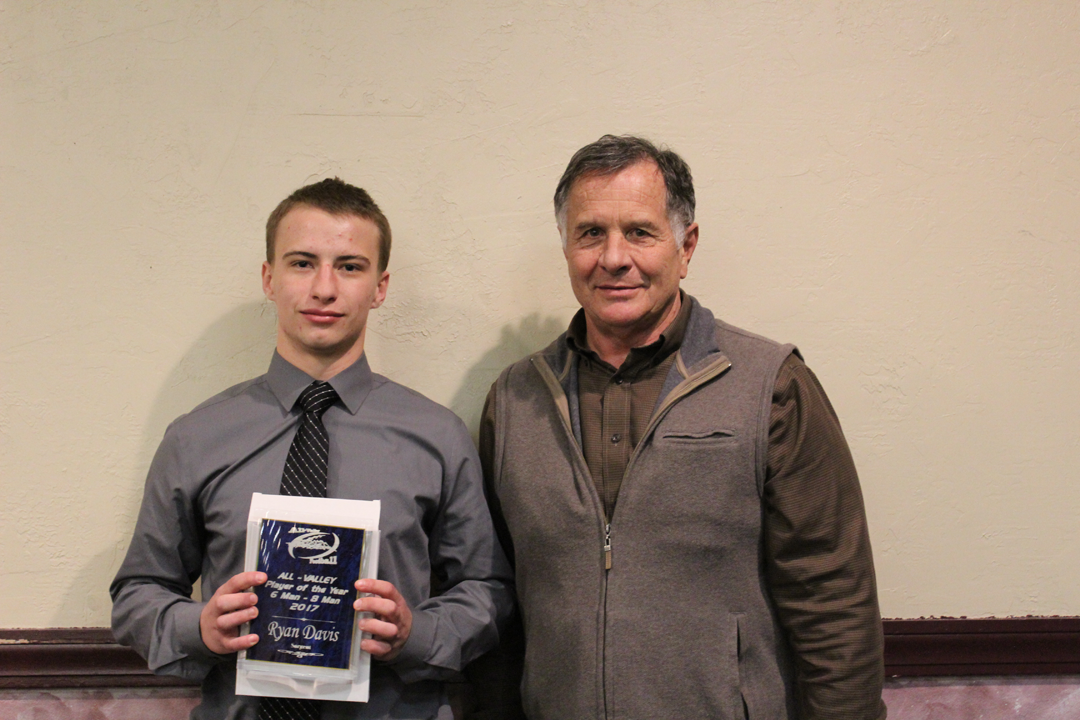 Bob Carlucci presents Ryan Davis of Sargent his second 6/8 Man Player of the Year award in the last two years. Davis did it all from the signal caller position amassing 2,108 yards from scrimmage and 15 touchdowns. 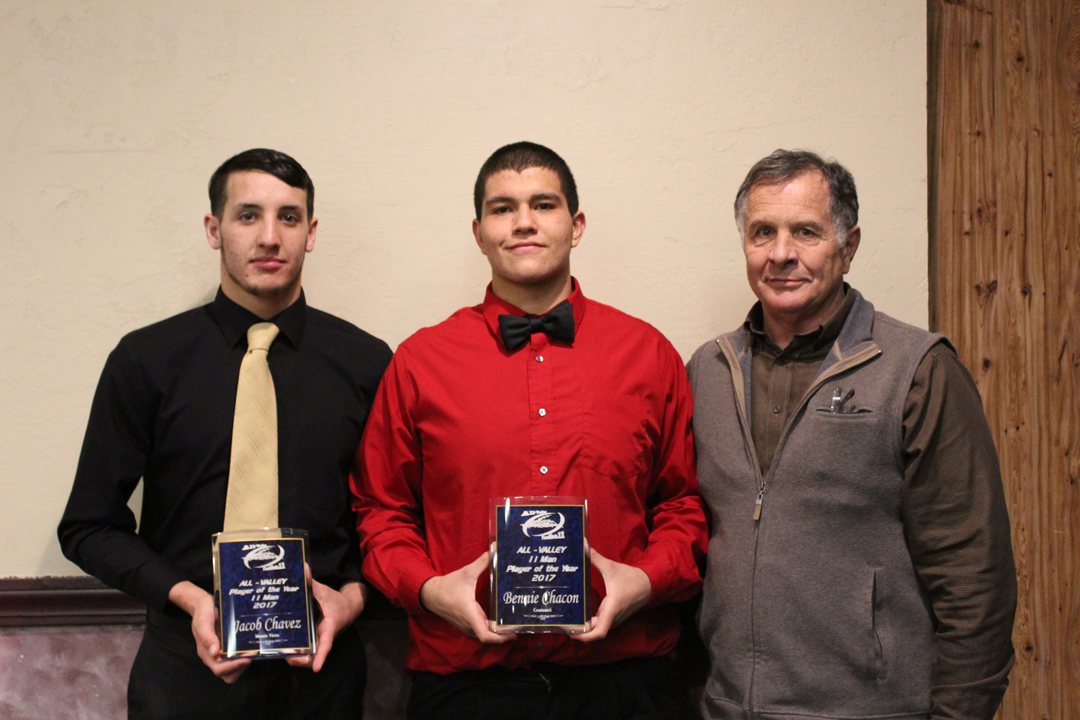 Bob Carlucci presents the awards for 11 Man Player of the Year awards to Jacob Chavez of Monte Vista (left) and Bennie Chacon of Centauri (middle).

"Everyone knew we were going to Jacob and he was still very hard to stop" - Manny Wasinger, Monte Vista FB HC. Facing run ready defenses Chavez still rushed for 1,396 yards and 18 touchdowns.

Bennie Chacon was a defensive force for the Falcons. At 6'1" 234 lbs Chacon was a prototypical run stuffer mashing offenses for 130 total tackles and 7.5 sacks. 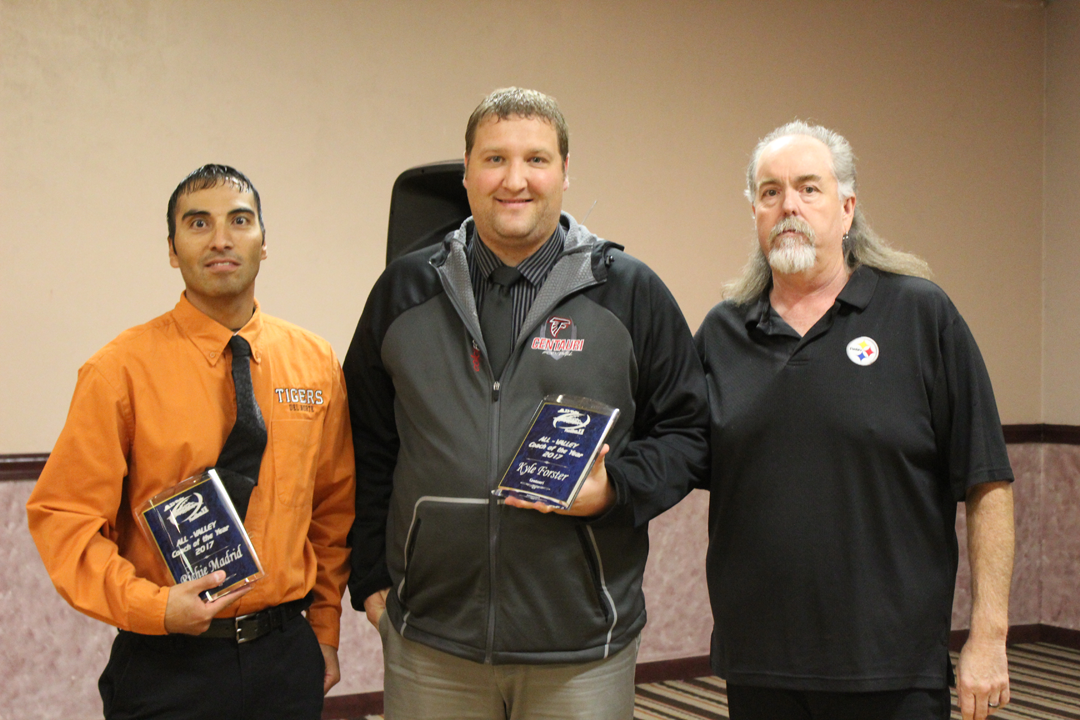 Kurt Holland presents the awards for Head Coach of the Year to Richie Madrid (left) of Del Norte and Kyle Forster (middle) of Centauri. Madrid turned around a bleak situation in Del Norte going from 0-9 in 2016 to 6-3 in 2017. Forster's Falcons went undefeated en route to hosting their second State Championship appearance in the last 5 years. 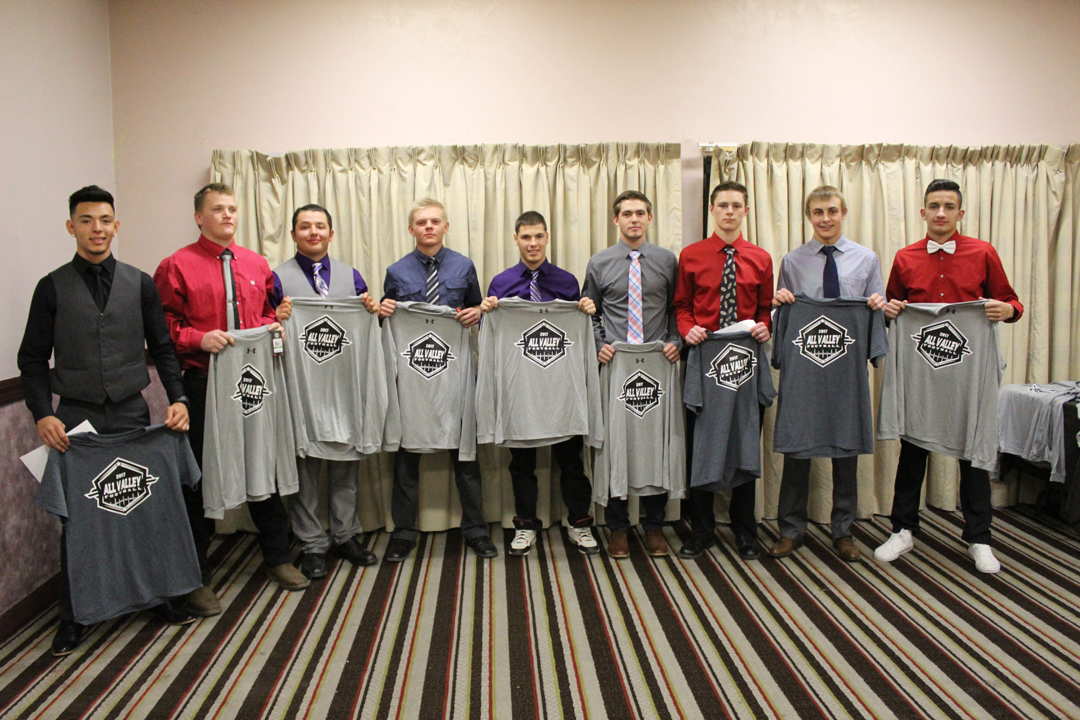 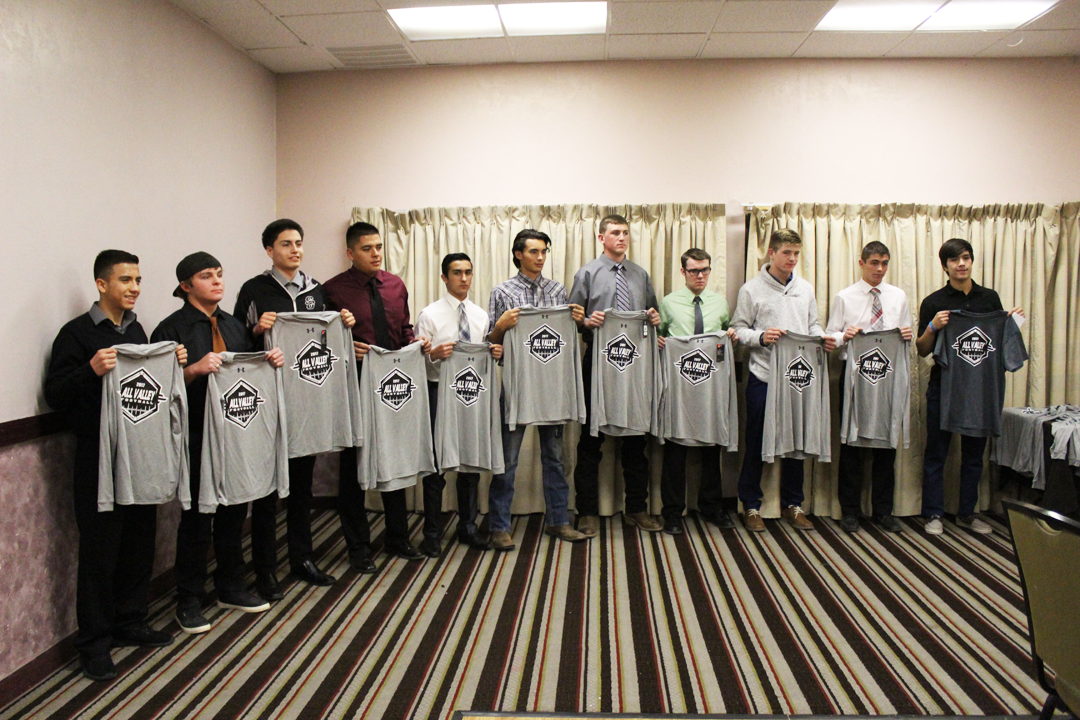 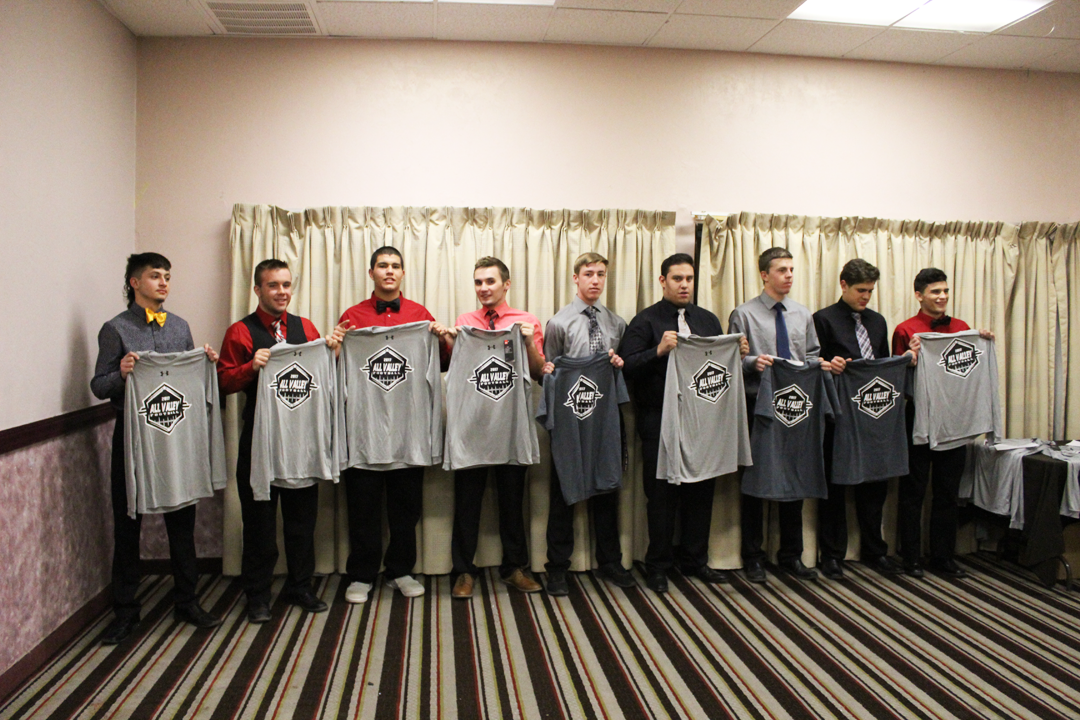 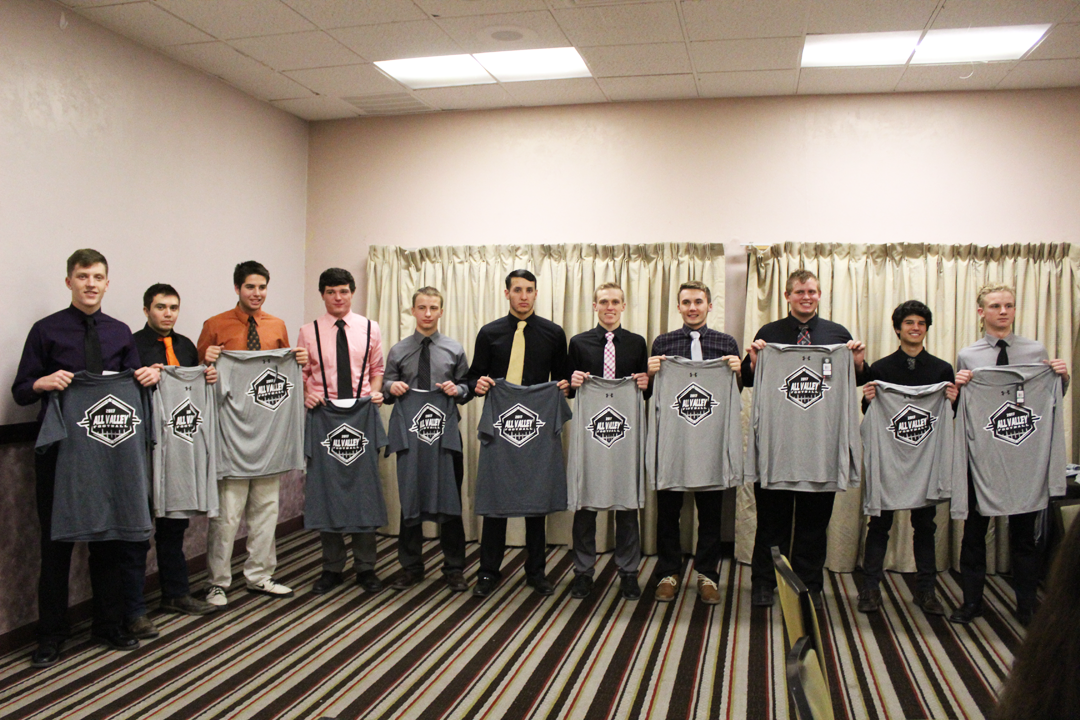