ALAMOSA — Shortly before Primary Election ballots go out to Alamosa County voters, residents had the opportunity Tuesday night to get acquainted with local candidates.

In addition to county candidates, the audience had the opportunity to hear from House District 62 candidates Donald Valdez, a Democrat seeking re-election, and Scott Honeycutt, a Republican seeking the house seat.

Facing the winners of the Republican Primary Election this fall will be Democrats Edward Vigil for the county commission seat and Donna Griego for the treasurer’s position.

Following are introductions from candidates, with specific questions to be addressed in a subsequent article. 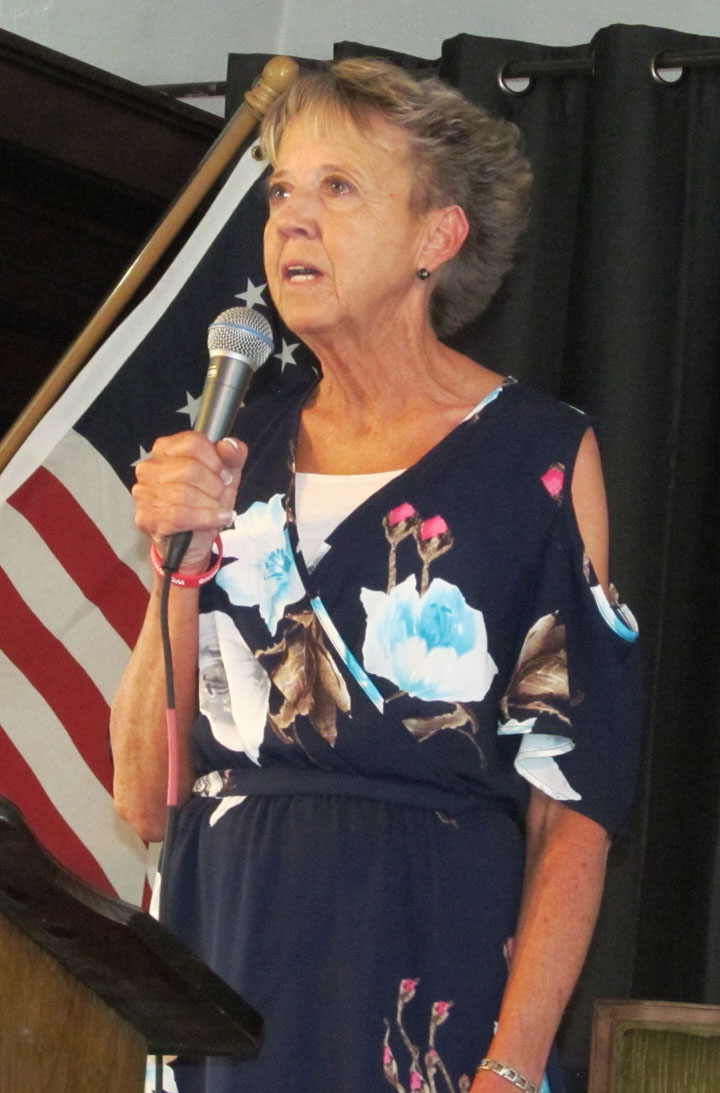 Alamosa County Clerk and Recorder Melanie Woodward, who was elected in 2006, said she is proud of the accomplishments in the office in the past 12 years including online license renewals, credit card payment availability and all mail ballots saving taxpayers money. Her office is responsible for elections, motor vehicle registrations, birth, death and marriage licenses, among other duties. Woodward has lived in Alamosa all her life, has been married to husband Jeff for 44 years and has three children and five grandchildren. “I take my job very seriously. I am very passionate about my job,” she said. “I try to be fair with everyone.” 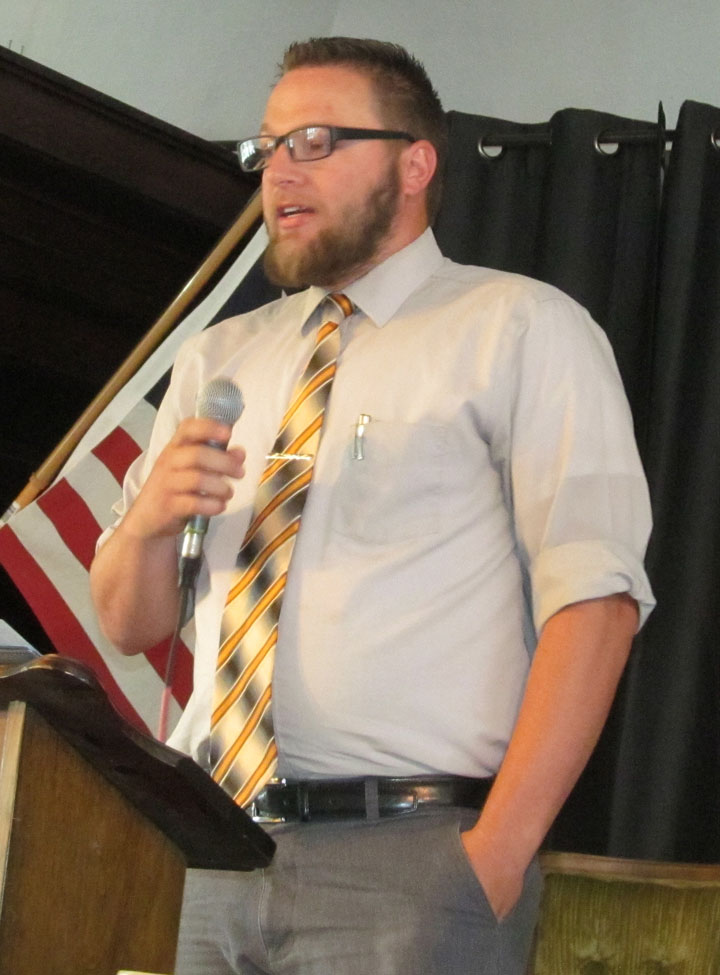 Coroner candidate Trace Larson, originally from Sanford, works for Rogers Family Mortuary where he said he has learned valuable lessons from current Coroner Kevin Rogers. He said Rogers has done such a good job he could not improve on the office but continue to maintain it as he has. “I will do my best to take care of people,” he said. He added that he wanted the opportunity to give back to this community that has given him so much. Alamosa County Assessor Sandra Hostetter, originally from Conejos Count, began working in the assessor’s office in 1993 when she found herself a single mother with four children to raise. She first worked under Assessor Dorothy Yeater and then Doris Orcutt and worked her way up from an entry-level data input position to appraiser and deputy assessor. She is a licensed appraiser. Hostetter is in her 16th year as assessor. The office is responsible for valuations of taxable property in the county and has never failed an audit. “I enjoy my job,” Hostetter said. “The county gave me an opportunity when I needed one desperately, and I would like to continue giving back to the county.” 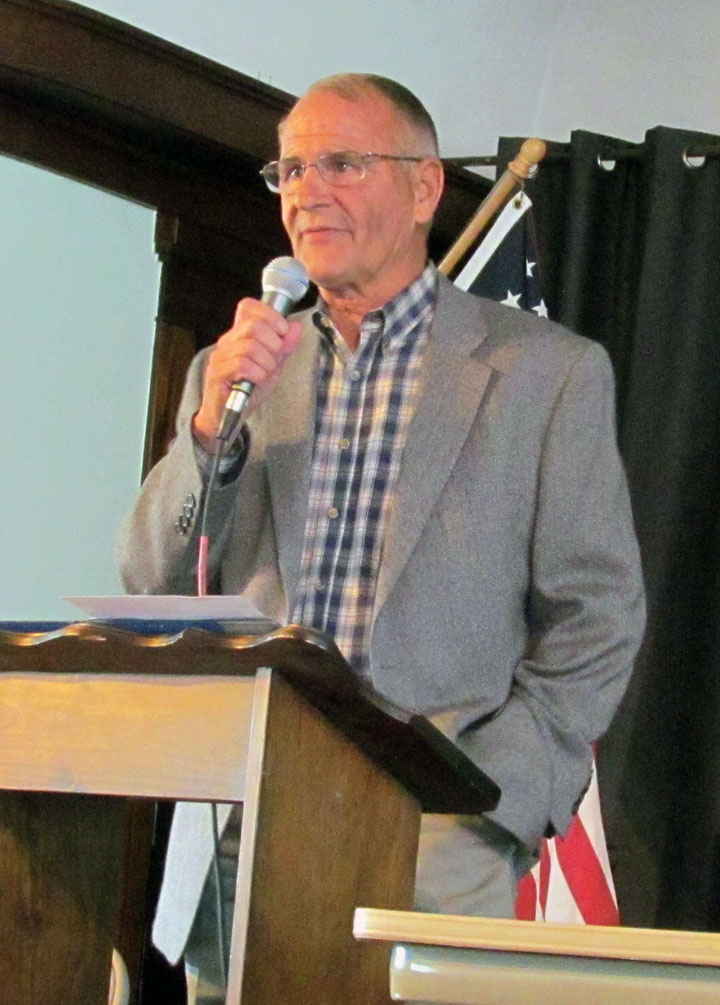 Alamosa County Sheriff Robert Jackson has served as sheriff for three and a half years and formerly served with the Alamosa Police Department for 31 years. He attended the FBI national academy in 2016. He said when he took office he was immediately faced with the challenges brought on by the opioid use. A jail that formerly housed about 80 inmates now houses 125-140 a day. A new 76-bed expansion will be completed in August, Jackson added. “This opioid crisis is killing us,” he said. “That’s one of our biggest challenges.”

He said he also promised when he was elected that he would provide 24-hour coverage with road deputies, and with the support of the county commissioners, he has been able to do that. Previously, there were no deputies on the road at 3 a.m.

“We have accomplished a lot. We have a lot more to accomplish,” he said. 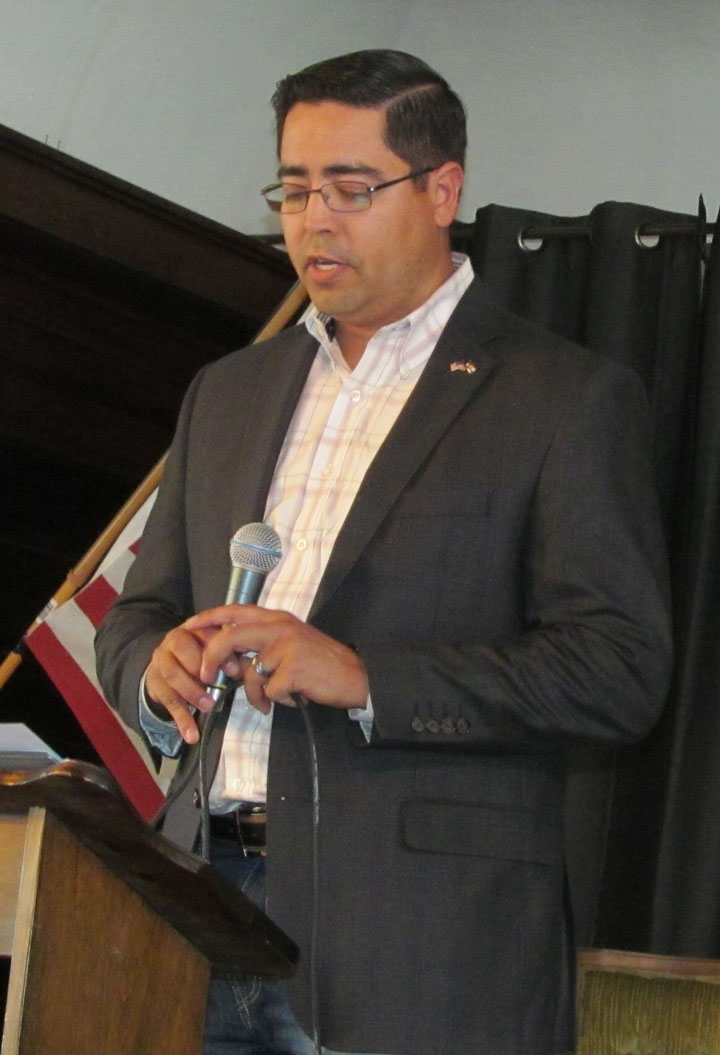 State Representative Donald Valdez was born and raised on a farm and ranch in the La Jara area and learned the value of hard work early on. Some of his priorities during his tenure at the state legislature have been healthcare, education and water rights. He was glad to bring telehealth coverage to rural areas through cooperative efforts with State Senator Larry Crowder, as well as expanding broadband in rural areas. He said the state needs to continue to invest in higher education to provide youth the skills they need to compete in the workplace. He said the opioid epidemic is taxing hospitals, medical providers, law enforcement and jails, and solutions need to be brought to deal with this challenge. In addition to the priorities already stated, he will focus on economic development, affordable housing, infrastructure improvements, agriculture and veterans. House District 62 candidate Scott Honeycutt was born and raised in Alamosa and has been married to wife Verla for 28 years. He has worked as a cowboy and school bus driver, has shod horses and is involved in the family business, Honeycutt Rodeos. He said having worked several jobs, he knows how to work hard. “I am very passionate about our kids and education,” he said. “I am very passionate about the Valley and what we can do to make it better.” He added that if he wasn’t willing to do something about it, he had no right to complain. “I believe in God, family and country, and that’s my priorities,” he concluded. Alamosa County Treasurer Candidate Amy McKinley is a San Luis Valley native who graduated from Sangre de Cristo and with her husband of 28 years has raised their two daughters on a small ranch and farm in the Mosca area. She worked for the county for 22 years and for Adams State and now works for the City of Alamosa. She said Widhalm is a good friend and mentor who has made lots of positive changes in the treasurer’s office. She said although Widhalm leaves big shoes to fill, she believes she is capable of taking up that challenge. She has served on the Sangre de Cristo school board and has supported numerous local organizations including 4-H, Girls Scouts and Boy Scouts, ASU Foundation, CROP Walk, La Puente and many others. She would hope to start a scholarship through the treasurer’s office similar to the clerks’ scholarship program. She said she believes she is in the right point in her life to take on the responsibilities of public office and promised to be a good steward of the public funds. “I will serve with dedication and integrity,” she said. Alamosa County Treasurer Candidate Jerald Montoya is a San Luis Valley native from Manassa who earned a business degree from Adams State University. He said he could bring energy, leadership and dedication to the role of treasurer and would hope to be a role model for youth in the community. He worked as bookkeeper at City Market responsible for accounts payable for 97 employees and learned valuable interpersonal skills. He said this experience would serve him well in the interactions required in the treasurer’s office. He also served as accountant for Alta Fuels and currently is financial officer for the Alamosa County Department of Human Services, managing a $15.6 million budget with more than 400 accounts and three different fiscal years. He has passed all audits. He is active in the financial officers group for Colorado. He said as a county employee, this could be a smooth transition, and he currently works with many of the staff already. “Together we can accomplish many things,” he said, “and I will rely on them to ensure the office succeeds.” Alamosa County Treasurer Candidate Donna Griego was born and raised in Alamosa and has been marred for 38 years to her husband Joe. They have four children and five grandchildren. She said she could bring to the position longevity, stability and dedication. She said she has been friends with Widhalm for almost 30 years, and she has been a mentor and friend. She said she would continue the leadership Widhalm has provided in the office. Griego has a BS in administration and business and management and a master’s degree in administration and leadership in higher education. She currently serves as a trustee at Adams State University. She has 30 years of dedicated public service for the state of Colorado. “I have effective leadership skills and management skills,” she said. Her skills have included staff management, budget experience and bookkeeping at an executive level. She co-founded the nonprofit Blue Star Mothers of Alamosa, the San Luis Valley chapter supporting military families, and co-founded Lifeways, which provided a lecture series on Valley culture. She would ensure that the treasurer’s office continued to meet the demands and challenges required. 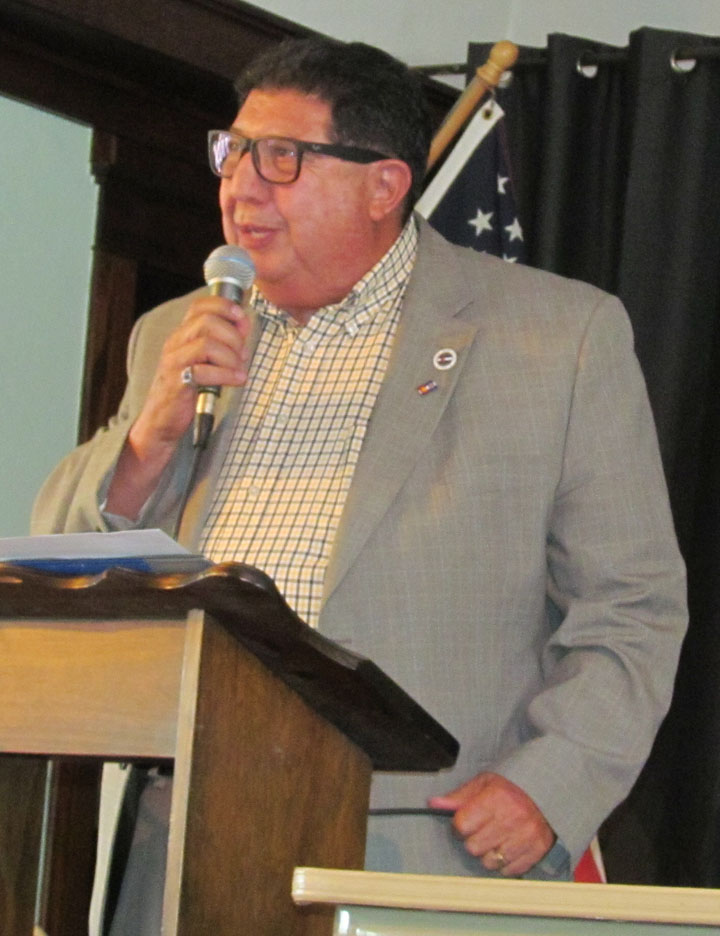 Alamosa County Commissioner Candidate Edward Vigil has been married for 48 years, has two daughters, had had a business in Alamosa for about 25 years and has been involved in public service for many years. “My life has been one of public service,” he said. He served as county commissioner in Costilla County for eight years, much of that time as chairman, and state representative for eight years but was term limited in both cases. He said he gained valuable leadership experience and learned how to work across the aisle “and any way I could to make sure whatever we did was in the best interest of the people of the San Luis Valley.” He added, “I am a proven leader.” He was chairman of several committees in the legislature including water, agriculture and capital development. He said when he was Costilla County commissioner, he worked with commissioners from throughout the Valley through the Valley association and would continue that kind of collaborative effort. “That’s how I like to work with folks, not necessarily bigger government but collaborative government … pool our resources.” 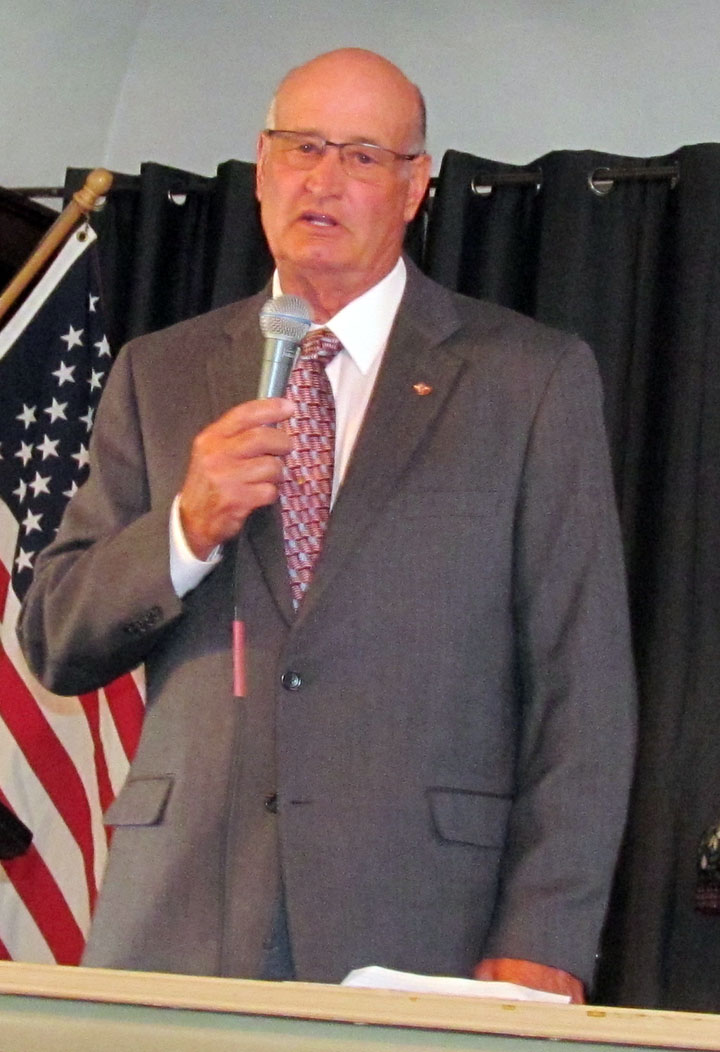 Alamosa County Commissioner Michael Yohn is a fourth generation Valley resident who was born and raised in Alamosa. He served in the U.S. Army from 1970-1972. He has been married 48 years to wife Janet. He attended SCSC in Pueblo and in 1976 moved back to Alamosa where he was a business owner for many years, selling the business in 2008. He said he subsequently ran for county commissioner and has served in that role since that time. He said this is a full-time job with many responsibilities. He said some of the accomplishments he has been a part of include the new county annex building, new airport terminal and runway, the current jail expansion and new courthouse, county roads being paved, solar projects, the completion of the Mosca sewer project, the budgetary increases for the sheriff and district attorney, closing out the Co-op landfill, cleaning up “devil’s playground,” implementing a blight ordinance and adding an environmental health staff position. The county has supported the methadone clinic and behavioral health and placed moratoriums on recreational and retail marijuana. He concluded by recognizing veterans and thanking them for their service. 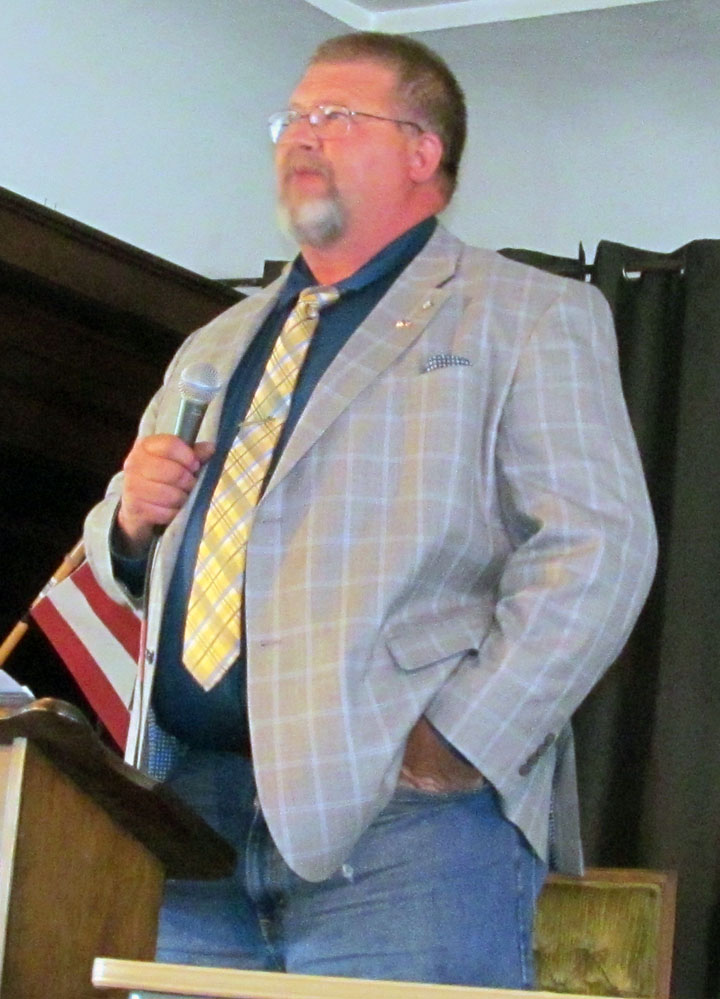 Alamosa County Commissioner Candidate Arlan Van Ry was born and raised in Alamosa and served in the Army for three years. He said the Rangers taught him to never fail his comrades and give more than 100 percent. He said the problems of veterans such as lack of transportation to the VA in Denver must not be ignored. He worked in construction for 25 years and now owns a drug and alcohol testing business. He said he has seen through that business the increase in the drug problem locally. “We need to give law enforcement the tools they need to stop this epidemic,” he said. He serves on the school board. He said he would not be one to settle for how things have always been done if there was a better way to do something. He said he wants to make Alamosa a place people want to live and where young people, like his two sons, are able to stay and make a living. He said he would be accessible. He said although he might not be the solution to all of the problems, “I can be a start.”

Valdez and Crowder cross the aisle to support SLVSBC