By: Stan Moyer - Updated: 5 years ago

PENITENTE CANYON — More than 87 competitors dealt with a sunny day, but windy afternoon in the 3rd Annual "12 Hours of Penitence" endurance mountain bike race at Penitente Canyon near La Garita in the San Luis Valley from 7 a.m. until 7 p.m. Saturday. The competition was designed around 16.9 mile laps, titled "Joker" covering the most demanding territory, and "Alternate" for a less difficult path.

But going the easier way cost riders a 25-minute penalty each time the alternate was chosen, so winning individuals and teams largely took the hard way. Tom Kavanaugh of Monte Vista completed five joker laps in 10 hours, 5 minutes, 53 seconds to defeat 22 other racers in the solo category with no limit on the number of gears on the bicycle used.

Perhaps the biggest surprise was Jeff Spenser's performance in the solo single speed bike category, finishing with six, the most joker laps, in 11 hours, 48 minutes. Minutes short of 12 hours for 101.4 miles may not sound great, until one considers that part of the time is spent jogging the bike through unforgiving rocky up-mountain that is nothing like riding down a smoothly paved level road. And, one other feature is single -- one gear.

A charming category winning team story was female duo team winner Primal Girls, Montrose — mom Laurie Brandt and daughter Paige Hauptman. Finishing five laps in 10 hours, 30 minutes, 5 seconds, moments after the pair was urged not to try another lap that would likely exceed the 7 p.m. race shutdown time. The pair finished in a time a little more than 40 minutes faster than the second place McMights, duo from Poncha Springs and Salida. The mother is between ages 55-59 and has won track competitions recently in West Virginia, from which she recently moved.

The beginning of the race was symbolic of some the rough territory covered. A "LeMans Start" required riders to leave their bikes on the ground a couple of hundred feet away from where the group awaited the 7 a.m. "We're Off" pitch then do a mass run to pick them up and leap on to get going.

The biggest benefit of the race is that $50 of each entry fee to the event goes to the support of the SLV high school cycling team the Rio Grande Composite Rattlers. The total amounts to more than $4,000. The team has entered several competitions around Colorado this fall and does not get the same kind of direct support such as high school football or volleyball teams, so this is very important help.

According to Kristi Mountain Sports owner and race organizer Eric Burt, having a pair of musical bands perform after 2 p.m. gave the this race more of a "festival feel" than previous ones without live music. The "D Mountain Lookouts" named after a letter on a hill near Del Norte were first to play. A very patient group of racers and volunteers was held partly by a well-received performance just before the awards ceremony started at a chilly time after dark at 8 p.m.

Electronic guitarist Milo Matthews gave an inspirational, fast-paced performance, helping to warm things up, with no disagreement that he was playing so quickly for his own sake, to fight the cooling temperature.

The announcer for the awards ceremony joked that the winner of the Male Trio category, Mount Massive Thighs team, with a 10 hours, 22 minutes, 31 second time for five laps, was "The only team that trained at altitude and then dropped down to 7,000 feet [elevation] for the race." Two members are from Leadville and one from Boulder.

The event had a large number of volunteers and organizations from around the SLV to give their help, like Crystal David, pictured below. 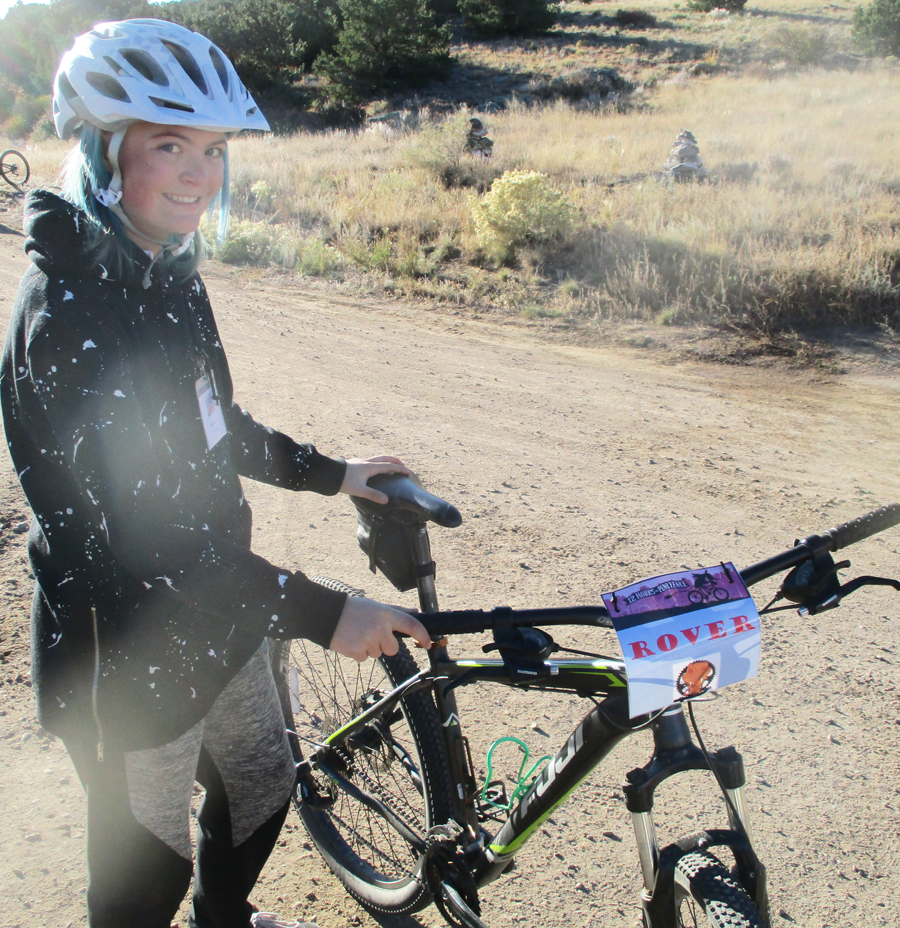 New for 2017 is a partnership with Adams State University and Tamera G. Rice, race director and adventure sports coordinator at the school.

Tucker-McDermott Foundation, whose slogan is "Elevate Del Norte" and the Rio Grande County Tourism Board also lent their support to the event.