By: Ruth Heide - Updated: 3 years ago

ALAMOSA — The potential for oil and gas leases in Huerfano County is too close for comfort for San Luis Valley residents concerned about how such activity might affect the Valley — particularly the Great Sand Dunes National Park & Preserve.

“As the crow flies,” over the Sangre de Cristo Mountains, potential parcels up for oil/gas leases by the Bureau of Land Management (BLM) are within a few miles of the national park.

“The parcels are just to the east, east of the park boundary and east of the Sangre de Cristo mountains,” BLM Public Affairs Specialist Jayson Barangan explained on Tuesday. “It’s outside of the boundaries of the park.”

Out of 11 parcels, 10 are within eight miles of the dunes and one within one mile, “as the crow flies,” added Anna Lee Vargas, director, Project Management and Community Outreach for Conejos Clean Water. “I realize they are on the other side of the Sangre de Cristos in Huerfano County,” she said, but when viewed through an aerial observation, the parcels are close to the dunes.

“We are so conscious as community members of our land and our water, air quality, water quality. We just don’t want anything to impact that,” she said.

On Tuesday Vargas said Conejos Clean Water respects that the BLM is doing its job and respects Huerfano County, where the parcels are located, but hopes the concerns from over the mountain will also be heard in this process.

She added, “We want to be respectful of Huerfano County, but those are our dunes. We are talking about the San Luis Valley being impacted also. We are hoping Huerfano County will engage in public process as well.”

Some of the concerns Conejos Clean Water is expressing with respect to the potential oil and gas leases revolve around air quality and light and noise pollution. Vargas pointed out that the Valley has a higher rate of childhood asthma than the rest of the state “so when we talk about air quality we are talking about … our public health.”

Other concerns are the spread of invasive species of non-native plants and impacts to wildlife including migratory birds, large mammals like elk and mule deer and species unique to this area like the dwarfed short horned lizard that exists on top of Mosca Pass near the proposed lease areas. In addition, about half of the parcels are within the Wolf Springs Ranch, Westcliffe, which is part of Colorado Parks and Wildlife’s Ranching for Wildlife program. The ranch was recently sold to the Navajo Nation and includes areas with views of Mount Blanca, a sacred mountain.

“We really feel we need to be cognizant of the environmental impacts of oil and gas,” Vargas said. She added that the eastern boundary of the dunes preserve is part of the Sangre de Cristo Wilderness Area that abuts one of the proposed oil/gas lease parcels. Also, two of the parcels are close to where upper Medano Creek comes into the Valley, she said.

Vargas said, “As Conejos Clean Water we want to listen to our community members and we are cognizant of public health and environmental concerns.”

She encouraged community input — “participate in the public process and let BLM know what your concerns are.”

The sale notice will go out July 20 with a 10-day lease sale protest period following. 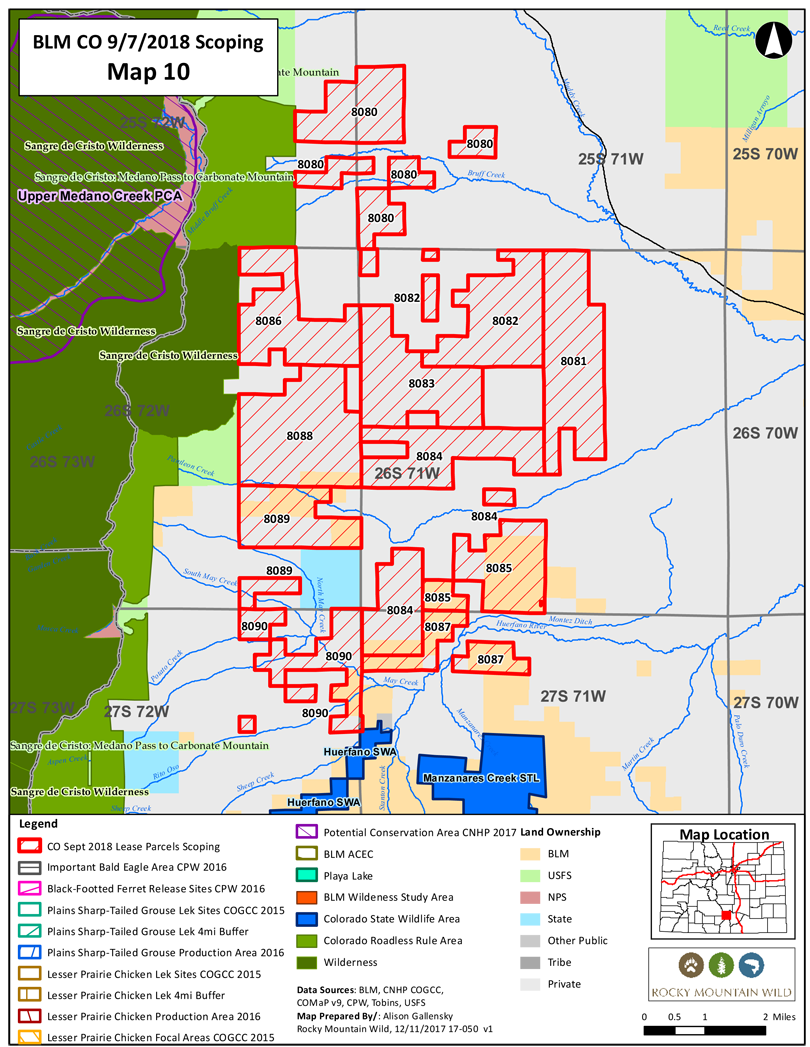