ALAMOSA — U.S. Rep. Scott Tipton was greeted with many boos and little applause during his town hall held at Alamosa City Hall on Tuesday evening. The standing-room-only event lasted a little over an hour and Tipton began by discussing his legislation.

"In our rural counties we continue to have a real challenge in terms of economic prosperity," Tipton said. "I introduced legislation called the Tailor Act to make sure the rules and regulations for our community banks are actually written to meet the size and risk portfolio of the institution so that we can open that door for capital access because capitalism simply doesn't work without capital.

"In Pueblo a bank wanted to make a loan, but under Dodd-Frank rules they were not allowed to do it and the business had to shut down and auction off their equipment. That's not what me need. We need to have that opportunity to create jobs and get the economy moving."

He talked about his reintroduction of The Water Rights Protection Act, which he believes is "fundamentally important for all of our western states."

"If any of our ski areas, which operate on public lands, wanted to get a permit renewed to be able to operate, they would sign their water rights over to the federal government," said Tipton. "In the West, water is a private property right."

Each person was given a ticket when they walked in and were allowed to ask a question if the corresponding ticket was drawn randomly out of a bag. Roughly 12 people got to ask questions and they were not allowed to hold the microphone. 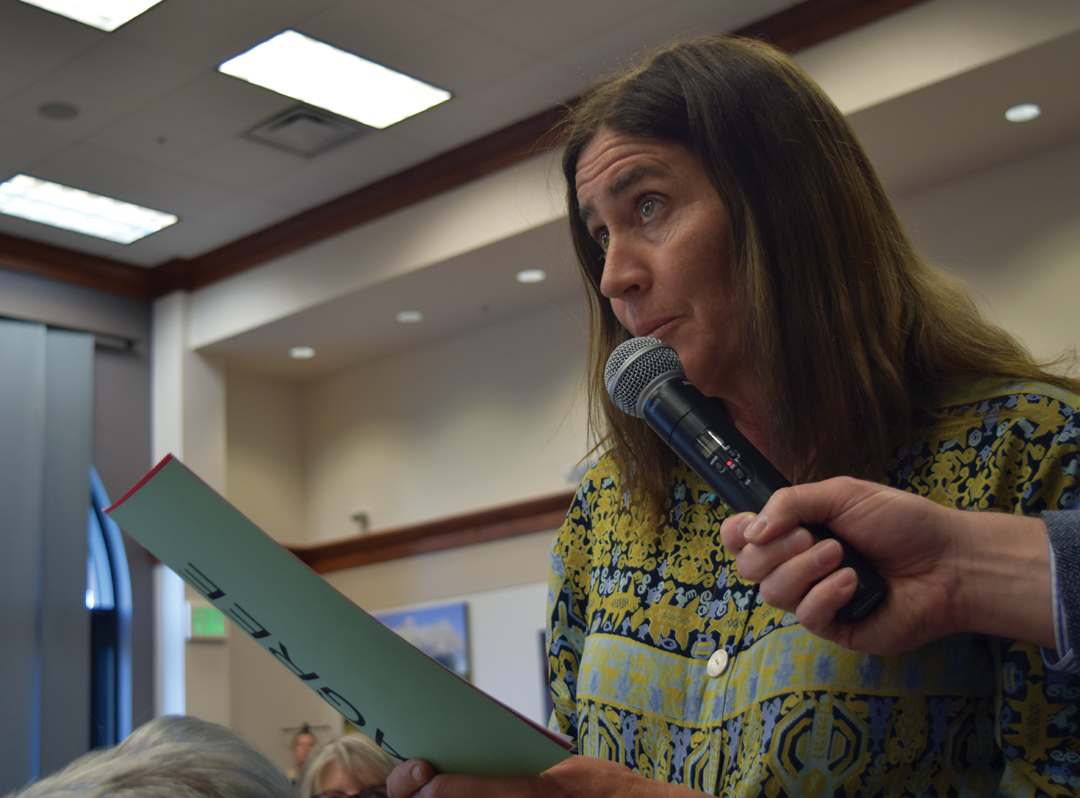 Susan Pierce asked Tipton about clean air for the first question. "In Colorado, one out of 10 children have a diagnosis of asthma," Pierce said. "In the light of this, how do you propose to reduce these figures, given the administration’s gutting of the [Environmental Protection Agency] and clean air protections?"

Pierce's question was met with applause from the audience.

"It wasn't actually a gutting," Tipton said. "That's an overstatement. The EPA's own statistics show a 4.5-5.5 percent drop in methane emissions here in our state. We're seeing a lot cleaner industry in terms of the traditional sources. Let's make sure we continue to enforce that."

The next question dealt with President Donald Trump's yet-to-be-released tax returns. "Is it acceptable to you that the financial entanglements of our head of state are unclear?" asked the citizen. "Will you commit today to be a leader in Congress and insist that Trump release his tax returns so that he can demonstrate the same transparency he demanded of President Obama?"

This too was met with applause.

"I encourage him to release his tax returns," said Tipton. "Every president has done it voluntarily. The president has indicated that when his audit is over that he'll release those." The crowd started to boo as soon as the audit was mentioned.

Someone asked if he was aware of House Resolution 305, the Presidential Tax Transparency Act, which would make releasing tax returns mandatory. Tipton said he wasn't aware of it and hasn't seen it yet.

A woman then asked about Tipton's voting recording regarding women and women's rights. "How can you justify voting against equal pay for women?" she said.

She was then encouraged to leave her contact info on a comment card with Tipton's staff and they would respond to her question in about a week.

Another audience member was applauded when they asked about Trump's stance on climate change. "The Pentagon has called climate change one of the top threats to our national security," she said. "Can you support the president's climate policy, from the gutting of the EPA and the withdrawal from the Paris climate accord?"

Tipton called the accord unfair to the United States.

"The problem I have with the Paris accord is that United States is being held to a separate standard than countries like China and India," he said. "You can recall when they had the Olympics in China they brought in fans to blow out the pollution.

"They need to be stepping to the plate to address the environmental concerns."

The crowd wasn't happy with his stance and along with boos one audience member said, "America has to lead."

Tipton was asked about his stance on Trump's budget proposal and if he'll try to save certain programs. Tipton responded that the budget is a legislative matter and not an executive decision. He said that he supports Essential Air Service for the airport, school lunch programs, and the Corporation for Public Broadcasting.

However, he suggested that the CPB could make changes. "Are they also looking at alternatives to enhance some of those revenues coming in? They probably could have sold commercials on "Downton Abbey" to fund themselves for 10 years." 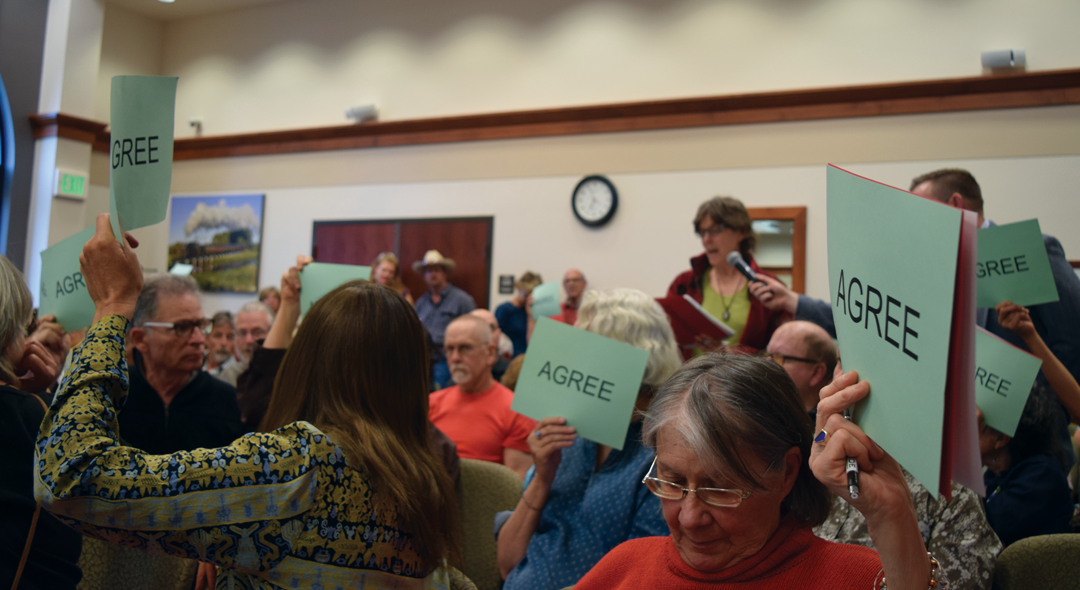 People hold up homemade signs that say "Agree," meaning that they agreed with the asker’s remarks at the town hall on Tuesday. They also raised other signs that said "Disagree" when they didn't like Tipton's response or "Answer the question" when they thought he wasn't giving a clear stance.

Along those same lines, the final question asked why is so much money being spent on the nuclear weapons program when the funds could go elsewhere.

"It's a reality that we're dealing with," Tipton said. “I wish we had no nuclear weapons anywhere in the world. I'd love to get rid of all of them but the reality is we have people trying to get them. When you start launching those you know what the outcome is going to be. It's not good."

After the town hall, many audience members filled out notecards with their own comments and questions that Tipton didn't have the chance to answer.