MONTE VISTA — The Memorial Day ceremonies at the Colorado State Veterans Cemetery are arguably some of the best in the area.

This year even Mother Nature agreed. A cloudless sky, just a slight breeze and a crowd of about 200, all there to remember and honor those who served the nation and those who died while serving.

Master of Ceremonies Matthew Martinez, a veteran of the United States Marine Corps and member of the Monte Vista City Council introduced each of the persons and groups that made up the annual event.

Mainstays such as the Memorial Regiment and Ladies of the Garrison, color guard veterans, bagpiper Tim Lambert and representatives of the American Legion, Disabled American Veterans and Veterans of Foreign Wars lad wreaths at the foot of a monument erected in 1912 and dedicated to the memory of those who fought and died in the Civil War and Spanish American War. 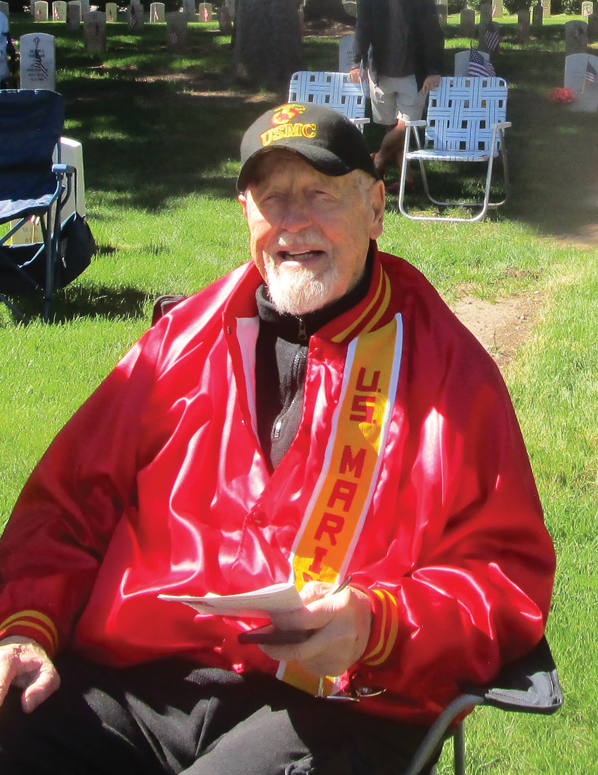 Dr. Manert Kennedy, a member of the Chosin Few, who fought with the United States Marine Corps at the frigid Chosin Reservoir during the Korean War, proudly points out that he enjoys the Memorial Day ceremonies each year. 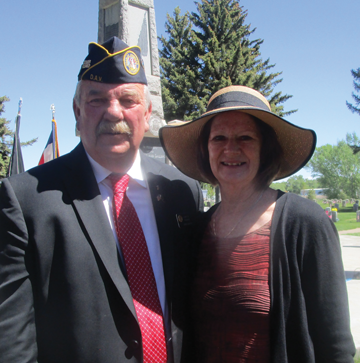 Keynote speaker State Sen. Larry Crowder served in Vietnam in 1969 and knows full well the sacrifices involved. A fifth generation Coloradan with a proud military heritage, Crowder can trace relatives back to Phillip Crowder, who was present at the surrender of General Cornwallis during the Revolutionary War.

He was a veteran service officer at the Colorado Veterans Community Living Center at Homelake before being elected to the state senate. His speech was as relevant to the past as it is to the present.

“I am of the belief that since the inception of this great nation, there has never been a military serviceman or woman who has died in vain. Our prayers should be that no American soldier will die in a time of war.

“In a world such as we live in, with turmoil, we should go forward with our idealism and values that maintain a nation of honor.”

Sen. Crowder continued, “I have no illusions about what little I can add now to the silent testimony of those who gave their lives willingly for their country. Words are even more feeble on this Memorial Day, for the sight before us is that of a strong and good nation that stands in silence and remembers those who were loved and who, in return, loved their countrymen enough to die for them.”

“Yet we must try to honor them —not for their sakes alone, but for our own. And if words cannot repay the debt we owe these men, surely with our actions we must strive to keep faith with them and with the vision that led them to battle and to final sacrifice. Our first obligation to them and ourselves is plain enough: which it stands, the freedom for: which they died, must endure and prosper. Their lives remind us that freedom is· not bought cheaply. It has a cost; it imposes a burden. And just as they whom we commemorate were willing to sacrifice, so too must we —in a less final, less heroic way—be willing to give of ourselves.”

Crowder reminded his audience, “It's not just strength or courage that we need, but understanding and a measure of wisdom as well. We must understand enough about our world to see the value of our alliances. We must be wise enough about ourselves to listen to our allies, to work with them, to build and strengthen the bonds between us.

“Our understanding must also extend to potential adversaries. We must strive to speak of them not belligerently, but firmly and frankly. And that's why we must never fail to note, as frequently as necessary, the wide gulf between our codes of morality. And that's why we must never hesitate to acknowledge the irrefutable difference between our view of man as master of he state and their view of man as servant of the state. Nor must we ever underestimate the seriousness of their aspirations to global expansion. The risk is the very freedom that has been so dearly won.”

“It is this honesty of mind that can open paths to peace, that can lead to fruitful negotiation, that can build a foundation upon which treaties between nations can stand and last — treaties that can someday bring about a reduction in the terrible arms of destruction, arms that threaten us with war even more terrible than those that have taken the lives of the Americans we honor today.

“And we owe them something, those men and woman who serve. We owe them first a promise:

“That just as they did not forget their missing comrades, neither, ever, will we. And there are other promises. We must always remember that peace is a fragile thing that needs constant-vigilance. We owe them a promise to look at the world with a steady gaze and, perhaps, a resigned toughness, knowing that we have adversaries in the world and challenges and the only way to meet them and maintain the peace is by staying strong”

“Thank you and may God bless America.”

Serving his second and final term as a Colorado State Senator, Crowder attests to the sacrifices that are required and made to this very say to uphold our democratic historical traditions. 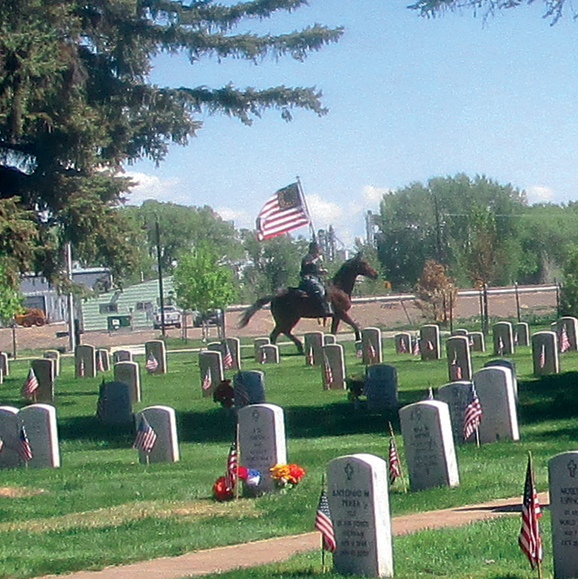 A member of the Ft. Garland Memorial Regiment takes a rapid ride around the cemetery, flying the U.S. Flag of the fort’s heyday.