DENVER -   Creede High School and Sangre de Cristo were in Greeley for the second straight day while Sanford competed in Loveland in the pursuit of 5th place.  Creede’s quest for the top spot in 1A baskeball was brought to an end by Peetz Friday night by a score of 69-67 in a game that took overtime to decide.  Sanford was unable to get past Highland, falling 69-54. According to the 2A playoff bracket on CHSAAnow.com, eighth seed Sanford and seventh seed Ellicot will not be competing in a seventh place game. Sangre de Cristo has also suffered their second straight loss of the state tournament, the latest coming at the hands of Cornerstone Christian Academy in a 58-48 game. CHSAAnow.com has detailed that Sangre de Cristo and Heritage Christian will also not play a seventh place game.

The highly anticipated matchup got underway in Bank of Colorado Arena between Creede and Peetz. The Miners got off to a hot start when they beat Cornerstone Christian, but were unable to maintain that momentum when they faced Peetz in the semifinals Friday night. The Miners and Bulldogs played a tight first quarter with Creede trailing 20-17.

In the second quarter the Bulldogs began to key in on Isaac Borchers and slow his production as the Miners’ stand-out was stifled to just two points, both coming from the free throw line. In Borcher’s stead few among the Miners seemed able to make up the slack. With 11 attempts the Miners shot 36 percent and after leading 28-25 allowed an 11-point run to Peetz. Creede would scramble to close the gap to 38-30 at the half.

A resurgence in the third quarter sliced the lead to just two points. Then early in the fourth Creede made it a new game again, tying the score at 51 apiece. The fourth quarter saw Borchers at his most productive; the senior collected 12 points, pulled down his tenth rebound and added a block as well. Borchers was the leading scorer for Creede tallying 33 points and another double-double.

As the seconds ticked down Creede was able to stay close and tie the game in the final throes at 60 point. With 1.3 seconds remaining, the Bulldogs cleared court and got off a pretty nifty hook-and-ladder for a clean look at the three pointer but couldn’t find the bottom of the net, sending the competitors to overtime.

In the final chapter Creede’s reliance on Borchers was increased when Finn Leggitt fouled out and Marcos Romero walked the tightrope with four. Down 67-65 Borchers was fouled and sent to the line. The Creede senior hit both making the Miners’ next priority defense.

Peetz took their time, bleeding the clock all the way down. When Peetz’s Logan Sircy looked to be making the offensive move Creede struck, three Miners moved into position to make the stop. The ball didn’t go to the net, rather to Gabe Naegele, waiting patiently behind the defense. All Creede could do was look on helplessly as Naegele banked in the game winner as time expired.

With the win Peetz will go to Loveland to face a giant-killer in South Baca. The Patriots eliminated the former top seed Holly in regionals. Then after the re-seeding for the state tournament, in two days knocked off the two and three seeds Heritage Christian and Front Range Baptist. Creede will face Front Range Baptist today at noon to decide third place back at the University of Northern Colorado in Greeley.

Captions: Finn Leggitt attempts a lay-up during the loss to Peetz on Friday. Leggit and the Miners will face Front Range Baptist on Saturday./Courier photos by Stephen Jiron 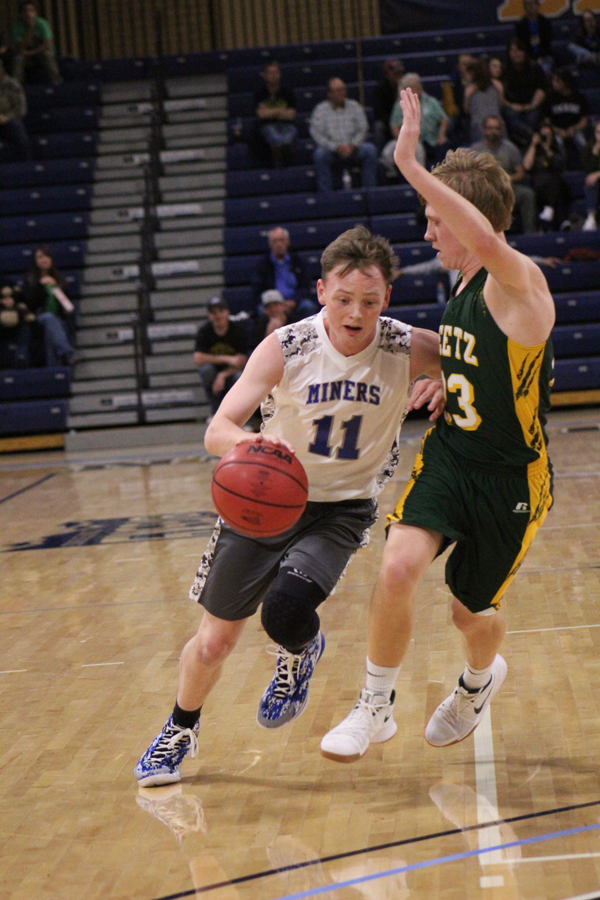 Creede’s Casper Freedle works his way inside against the Peetz defense. Freedle was second on the team with 16 points. 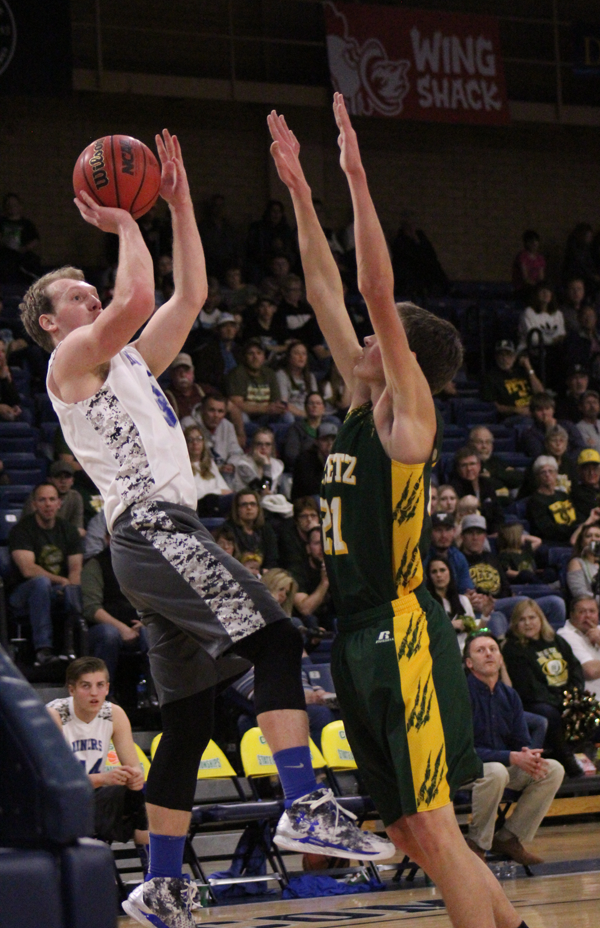 Isaac Borchers attempts a swift fadeaway jumper during Friday’s contest in Bank of Colorado Arena. Borchers had a great night with 33 points, 10 rebounds 3 assists, a steal and a block. 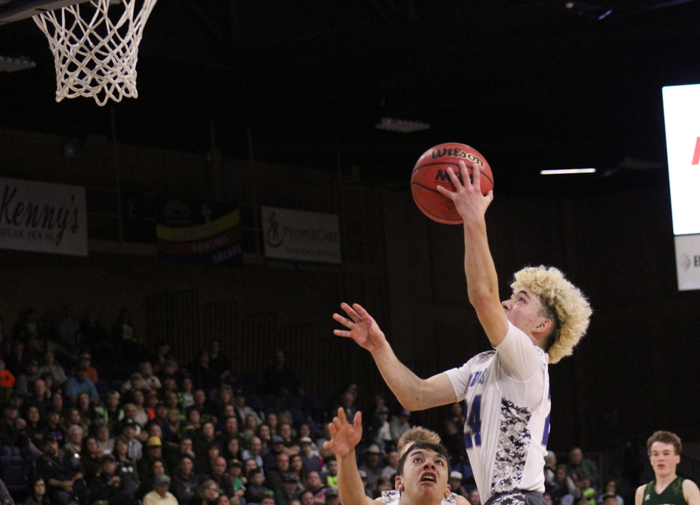 Marcos Romero tries for two inside the paint during Friday evening’s game.