By: Ruthanne Johnson - Updated: 5 years ago

Emilee Haefeli (right) and Camille Ruggles (left) cross the finish line at Elmwood Golf Course in Pueblo. The pair were named co-champions of class 2A region 3, during the regional qualifiers race on Oct. 19.

DEL NORTE — When Emilee Haefeli was a little girl, lots of folks predicted she would be like her mom.  They were right.
Her mom, Laura Haefeli, is a world-class runner who competed on the U.S. National Biathlon team and was the first American woman to medal at the World Mountain Running Championship in 2007.

Emilee, 17, is also an award-winning runner. She has been running cross-country and track for the Del Norte Tigers since she was a high school freshman. In early October, she won the Del Norte Cross-Country Invitational in South Fork. Later that same month, she qualified for state championships after tying for first place in 2A cross country regionals in Pueblo. At state just one week later, she edged past her main Valley competitor in the 5K, Camille Ruggles, with a personal best of 21:46. She had tied for first with Ruggles at regionals. 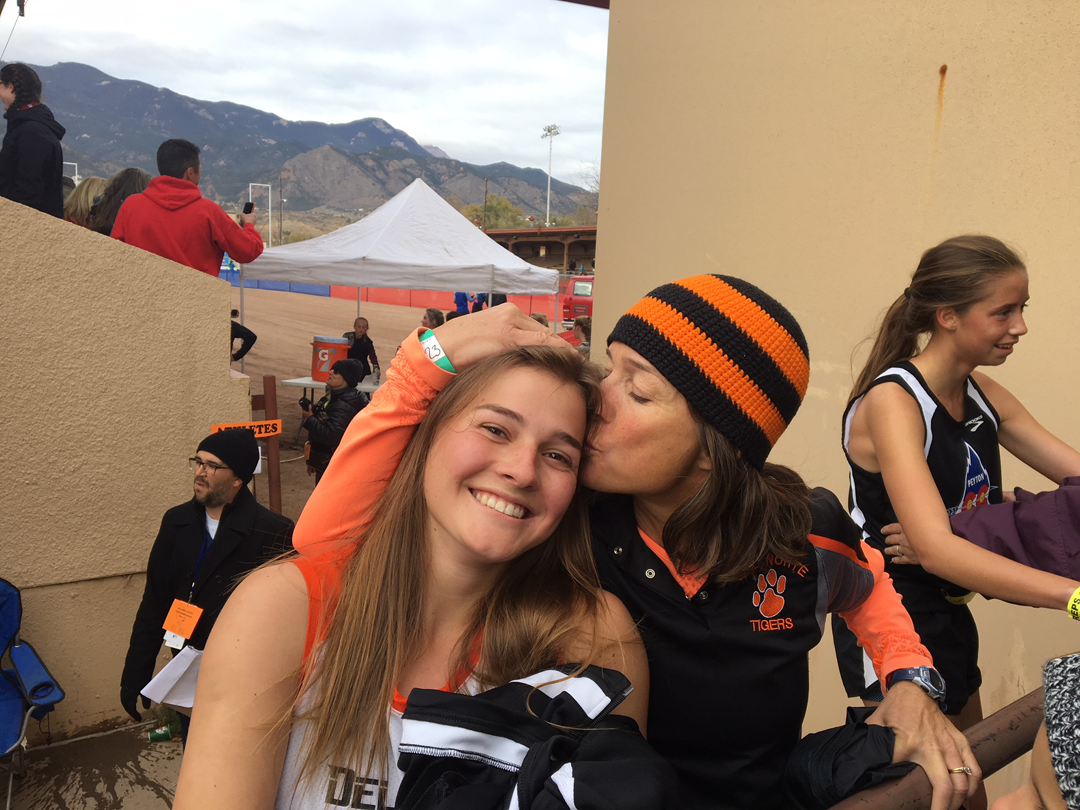 Emilee and her mother Laura Haefeli at the Colorado Cross Country State Championship in Colorado Springs on Oct. 29th.

Emilee started running when she was about 12 years old, says mom Laura Haefeli, who would take her daughter and several other kids to the youth foot races held every summer in Alamosa. “Emilee wanted to do the race---and she always did really well.” Emilee has since won many awards in cross country and track events, including qualifying for the USA Track & Field Junior Olympics in 2012 and Colorado State Championships for the last three years. “There are finesse runners and really strong runners,” her mom says. "Emilee is a strong runner. On a hilly course on a windy day, she’s going to do well."

Emilee’s training grounds with her teammates and mom---who also happens to be the coach of the Del Norte High School cross-country team---includes places like Elephant Rocks, Penitente Canyon, Rifle Range and D Mountain. The locations are beautiful yet rugged---perfect for the agonizing, high-altitude hill sprints that help prepare her for tough competitions. “I am not going to lie, it’s sometimes very hard to keep going when I’m running,” says Emilee.  “But it makes me feel light. It gives me a feeling of comfort. And when I am done, a sense of accomplishment washes over me.”

But long-distance running isn’t all about gold medals and “feeling light.” The sport teaches discipline and focus. “I notice my cross-country runners get pretty good grades,” Laura Haefeli says. “And I have seen that in other schools, too. Cross country gives them goals and they know they have to work hard to get there.”

Emilee is now looking at several colleges for athletic scholarships on their cross country and track teams. She wants to major in marine biology or veterinary science, and minor in art. Just this year, she designed the official T-shirt for the 2018 Bee’s Knee’s 5K Trail Run in Del Norte, a race sponsored by the family business, Haefeli Honey.

Though Emilee isn't sure how serious she wants to get in the sport, one thing is for sure: she'll keep running to see where it takes her.