With a great deal of support from a team of local professionals, the two graduated from the 12th Judicial Drug Court a few days before Christmas.

They are the first graduates of the Drug Court and promised to help others on the same path to recovery and success.

At the time of the graduation, Authelet was 379 days sober and Garcia, pictured above, counted 494 days of sobriety. They received plaques, gifts and a standing ovation from the team that had provided them support — and an occasional shove from the back side — through the many months the two worked to accomplish goals and meet the requirements for graduation.

Drug Court, which began in the San Luis Valley in July 2016, is based on a team approach and includes representatives of the Probation Department, Colorado State Patrol, Alamosa Police Department, Alamosa Sheriff’s Office, 12th Judicial District Attorney’s Office, Public Defender’s Office, court collections office, mental health specialists and treatment providers. Drug Court offers substance abuse offenders a support network to help bring stability into their lives and help them become productive members of the community. One of the major goals is to decrease recidivism among offenders with substance abuse addictions.

Changing lives is the ultimate outcome, and Authelet and Garcia are evidence that the program can be successful.

“We are here to celebrate two individuals who have done very well in this program,” District Judge Michael Gonzales said. “We are very proud to be here for them.”

The judge also acknowledged the team members whose commitment to the program greatly contributed to the two graduates’ success. Judge Gonzales specifically commended Probation Officer Teddy Archuleta who “has given his life to make this program successful.” Archuleta was available seven days a week 24 hours a day, with Drug Court clients having access to his cell phone number.

“I don’t think we would have the success we have if it wasn’t for that kind of dedication,” Judge Gonzales said.

The judge also commended Deputy State Public Defender James Valenti who not only participated in the Drug Court as a team member but also made himself available outside of court to help folks find ways to enjoy lives of sobriety, such as disc golf.

Valenti produced a video that shared the journey Authelet and Garcia had taken to successfully graduate from Drug Court. Valenti also pointed out the serious drug problem in the San Luis Valley where heroin overdose death rates nearly tripled between 2001 and 2015.

In the video, Authelet talked about the things he enjoys now, “simple things” like looking at the stars. “I didn’t even realize there were that many stars till I started looking up at night.”

Calling his history a series of “knucklehead moves,” he had been in and out of rehab and detoxes since age 21, he said. He wasn’t sure at first that he could be successful in Drug Court, he said, and the judge wasn’t convinced either, but the support of the team members gave them both hope that Authelet could succeed.

“Having people tell you they believe in you is a big change for me,” Authelet said. “They are there for you.” 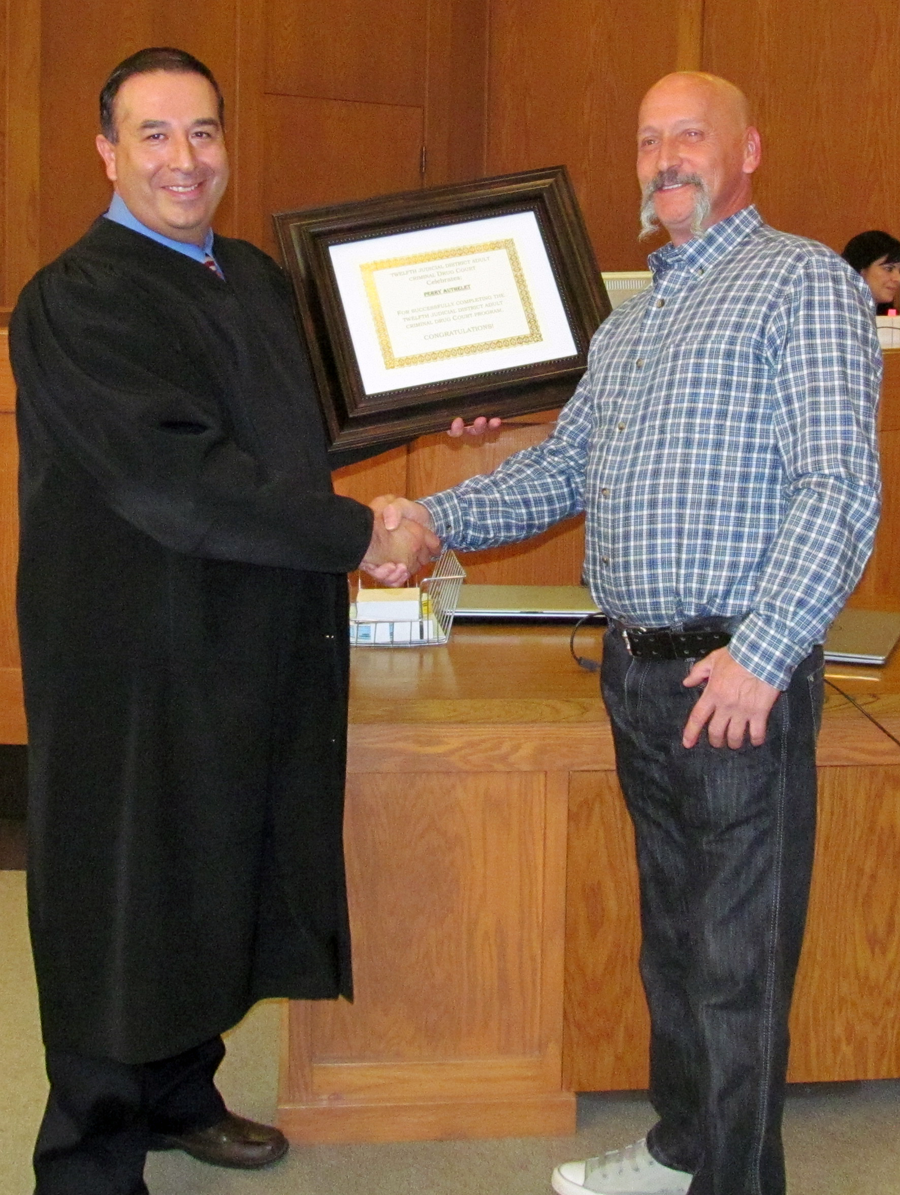 Perry Authelet, right, is one of the first graduates of the 12th Judicial District Drug Court, which began in July 2016. District Judge Michael Gonzales congratulates him and presents him with a plaque. He and fellow graduate Arturo Garcia received standing ovations during their December 21st graduation ceremony.

In the video, Judge Gonzales talked about how Authelet was now also there for others in the program. “He’s a pillar of the program … He’s raised other people up while at the same time accomplishing what I personally didn’t think he could accomplish.” He is now an example for others.

“He made a decision to stay sober and he followed through with that commitment that he made to himself,” Archuleta said. “If you can chase drugs, you can chase your sobriety,” Authelet said in the video. “It’s a choice, and I chose this.”

In the video, Garcia, a drug addict for eight years, talked about the difference between waking up every day as an addict looking for his next fix and the money to buy it — even returning things he had just bought the day before — and now being able to buy things for his son. He is involved in his son’s life, taking him to basketball and wrestling practices and tournaments.

“My days are filled with keeping my hands busy, working on cars trying to make money,” he said.

“I don’t hurt nearly as bad,” he said. “I don’t even know why I did it anymore. The sun does shine every day even when it snows.”

Garcia had been a drug addict for eight years, beginning with pills for pain from a back injury and then going to heroin. He had never been in trouble before the drug case that brought him to court, Archuleta said, adding that Garcia begged for the methadone clinic to assist him in getting off heroin because he could not do it on his own.

He first went through a rehab program in Pueblo for three weeks and about three months of rehab treatment back in Alamosa.

“He wanted to change,” Archuleta said. And he did. “He never once had a positive UA.”

“He’s never looked back,” Judge Gonzales added in the video interview. “He’s set a goal for himself to prove not just to himself but to prove to others that he could do what he needed to do.”

Just like Authelet, Garcia also wants to be an example for others “help them try to stay sober,” he said, “do whatever I can to help someone else.”

In the video interview Garcia added that helping other people made him want to stay sober even more.

He credited the Drug Court team’s support with helping him stay sober, and he wants to help others do the same.

Following the video the judge convened the Drug Court and asked for updates on Authelet and Garcia. Archuleta told the judge the two had completed all requirements, “worked very hard,” and complied with their relapse prevention plans.

“I don’t have any concerns as far as staying sober,” Authelet said. “My concern is just keep being the person I am now as opposed to the person I used to be.” He added, “I have the tools now and the friends now and the support to continue to do this.”

When the judge asked Authelet why he did this, he said “So I can look at myself in the mirror in the morning and like what I see.”

The judge asked him if he liked what he saw, and Authelet answered, “What’s not to like?”

Authelet said he would keep going to support groups, and he and Garcia would support each other. He added that he would continue to attend Drug Court, not because he had to but to support others in the program.

“I am proud of you,” Judge Gonzales told Authelet. The judge acknowledged his earlier reluctance regarding Authlet’s potential for success and said it just proved that “a book can’t be judged by its cover.”

The judge added, “You didn’t just work the program. You did it for yourself, to be successful.”

The judge terminated Authelet’s probation on his graduation day from Drug Court, December 21.

Authelet said that morning he saw a bald eagle, a symbol of his freedom. Judge Gonzales said, “you soar my brother, you soar.”

As with his fellow graduate, Garcia completed all of his requirements through the Drug Court, and the judge terminated his probation. Archuleta told the judge that Garcia had moved through all of the phases required of him with minimal issues.

“When he made that decision he was going to stay sober, he meant it,” Archuleta said of Garcia.

Garcia told the judge, “Every day is better now than it was the last day I was high.”

When the judge asked him the same question he had asked Authelet about what he saw when he looked in the mirror, Garcia said, “I see one handsome man.”

As his fellow graduate had said, Garcia said he would continue seeking support from friends and groups that would help him remain sober.

“I am very proud of what you have done,” Judge Gonzales told Garcia. He said Garcia’s son could also be very proud of him for what he had done for him and for himself. The judge encouraged Garcia that he could accomplish anything he set his mind to.

In addition to terminating Garcia’s probation, he reduced his felony to a misdemeanor. “You are no longer a felon,” he told Garcia.

Judge Gonzales stressed how important and crucial efforts like Drug Court are.

He said this community and this state and nation are fighting a war every day with drug addiction, and are losing that war, so when there is an opportunity to celebrate a victory and see people get their lives back, as these two graduates have, it helps motivate those fighting in the war to keep on fighting.