ALAMOSA — Many preschoolers do not even know the words “adhesion” and “friction,” much less what they mean.

However, they are just part of the vocabulary of Antoinette Trujillo’s daughter, a Head Start student in Antonito.

“Her vocabulary is large,” Antoinette said. “My daughter is so excited for school and has an eagerness to learn like a little sponge.”

Antoinette and her husband read to their children every night, and Antoinette has been reading to her daughter since before she was born.

“We have huge boxes of books. We read four to five books a night to them.”

She said she is grateful for the part that Save the Children’s Early Steps to School Success has played in her family’s life. She credits the involvement of early childhood coordinators with her daughter’s preparedness for school and the ongoing support of her family through the subsequent birth of her son and pending birth of her third child.

“It’s a wonderful program,” she said. “It gives us the tools to be good parents.”

Currently working with the Trujillo family is Philip Ruybal, one of several early childhood coordinators throughout the San Luis Valley. He is headquartered at Guadalupe Elementary. Antoinette said she appreciated that Ruybal worked around her schedule as a working mom. She is a case manager with Alamosa Options For Long Term Care.

She and her husband have been part of the Early Steps program in the Valley since May of 2012, and their daughter was born in July of that year.

Coordinators, families and community partners gathered on Wednesday for a celebration highlighting Save the Children’s literacy programs in the Valley and thanking the organizations that have supported them in the past five years.

Early Steps works with children 0-3 through a home program that includes book bags, monitoring of success levels on a range of skills from fine motor to vocabulary, providing age appropriate activities for parents and children to do together and referring families to services they might need. For example, Ruybal referred a youngster with speech difficulties to the SLV Board of Cooperative Educational Services, and “now he’s a chatter box making up for years of not being able to speak.”

Early Steps has also expanded to youngsters ages 3-5, explained Colorado Early Childhood Program Specialist Tamara Trujillo-Pacheco. She said that Early Steps came to the San Luis Valley in 2012 with its 0-3 age program, which involves about 20 children through each site. 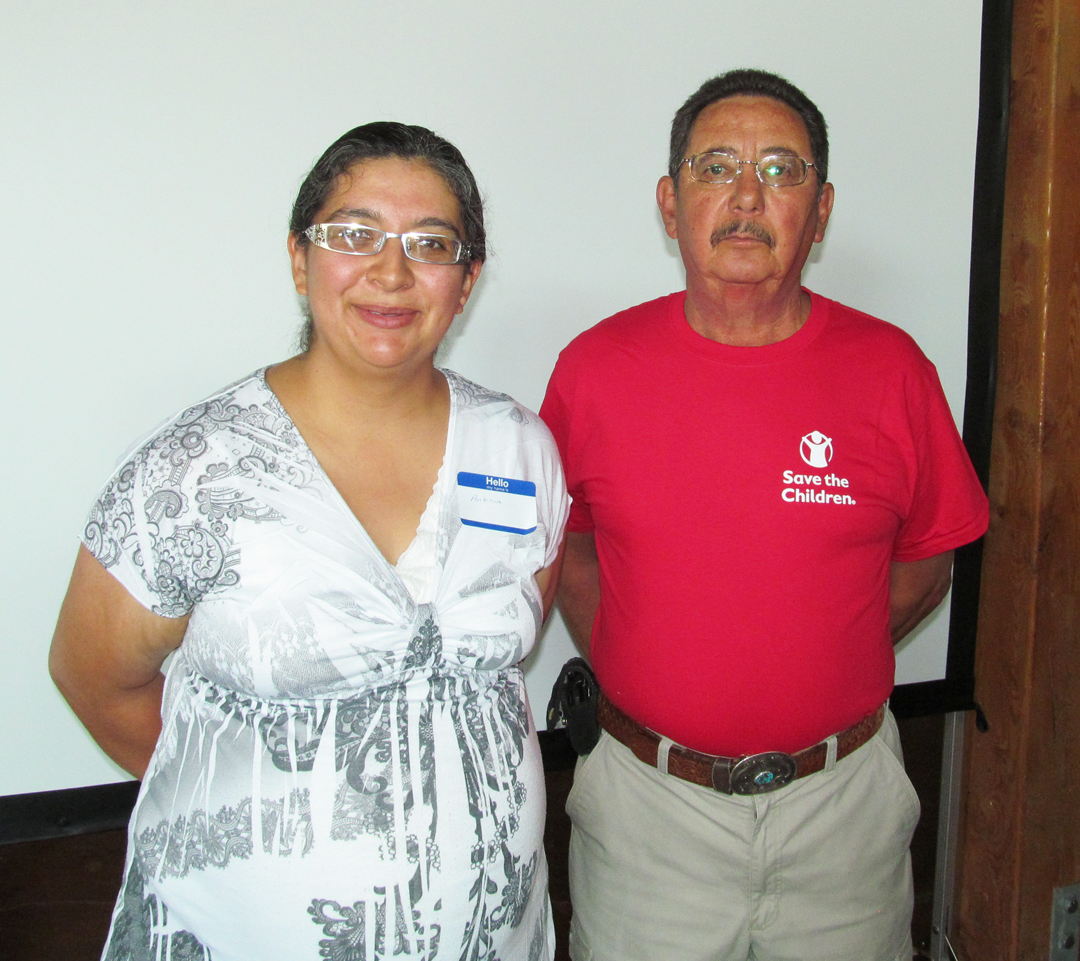 Antoinette Trujillo appreciates the support she and her family have received from Early Childhood Coordinator Philip A. Ruybal.

Trujillo-Pacheco said school readiness begins prenatally, while children are still in the womb, and research has proven that those early influences make an impact on a child’s life and preparedness for school later on. The early childhood coordinators work with families to provide a smooth transition from home to preschool and preschool to Head Start and beyond, she added. They foster positive communication between families and schools.

“We try to work with the families to help them get their children that early exposure to literacy,” said Steve Fringer, early childhood coordinator working with Rocky Mountain SER Head Start programs in Sanford and Manassa.

Ruybal added that rural communities sometimes suffer from isolation and other factors that constitute harmful risks for children and families. Early Steps focuses on positive experiences and stimulating environments for children, he explained.

Save the Children’s programs like Early Steps track youngsters’ success and test children with measures such as the Peabody Vocabulary Test at ages 3 and 5.

“That’s one way we gauge success,” explained Melonie Dominguez, who works in the Del Norte Elementary School. The 45 3-year-olds tested with the Peabody Vocabulary Test recently averaged a score of 99.7 percent, which highlighted the success of the Valley’s program.

“We help parents teach their children,” Dominguez added. Parents learn what kind of elements are needed in their home environment for their children to succeed and become mindful of activities like singing and reading that help their children learn and grow.

Dominguez said as a lifetime Del Norte resident, she understands the community where she works.
“We have connections to our local communities and our culture. We know how to get into the homes. It’s an honor to be allowed into someone’s home,” she said.

She added that the coordinators receive extensive training, with 670 hours of professional development logged in 2016.

In addition to Ruybal, Fringer and Dominguez, other early childhood coordinators in the San Luis Valley are Martha Mascarenas at Centennial and Sierra Grande, Erica Maldonado at Alamosa and Rose Ruggles Valdez at Haskin Elementary in Center.

Trujillo-Pacheco acknowledged national partners such as Toys R Us, which has generously donated age-appropriate educational toys to Early Steps in the 14 U.S. states where the program is currently operating. New partners this year are vroom, which is providing brain building apps, and Burt’s Bees Baby, which, for every box purchased, is donating a box of organic products to Early Steps families.

Community Literacy Specialist Azeneth Heredia shared information about Save the Children’s school age programs that focus on components such as reading and health. The program in Haskin Elementary, for example, has enrolled 40 students.

Heredia also spoke about the importance of the literacy councils, which involve folks from the community such as parents, educators, faith-based representatives, agency representatives and law enforcement. Alamosa’s council consists of 25 members, for example.