Falcons foiled 10-7 in 1A State Championship

Tristen Crowther (7) and Bennie Chacon (75) combine for a tackle for loss. Strasburg was scoring 36.5 points per game before meeting Centauri, the Falcons held them to just 10.

LA JARA — Saturday afternoon the stands at Centauri High School were overflowing with humanity. People from all over the valley were in attendance to see if Centauri could get the final win to accent a perfect season. Strasburg’s own fan base traveled well to witness the possibility of their Indians repeating as state champions for the second year running.

Centauri hadn’t lost all season, and brought one of the strongest defenses in all of Colorado Class 1A football. Strasburg traded on their offense namely rushing receiving weapon Hunter Bergstrom. The title game was strength versus strength, and Centauri seemed resolute to not let Bergstrom take over as they kept him under 100 yards rushing in the game.

Both teams took awhile to shake off the big game jitters trading punts for the first few series. Strasburg settled in first with a drive that covered 77 yards before progress stalled on a holding call and an incompletion. On a 4th and goal from the 16 yard line Jacob Miller found teammate Michael Spence on the five yard line with a dart, Spence spun off a defender and slipped in to give the Indians a seven point lead. 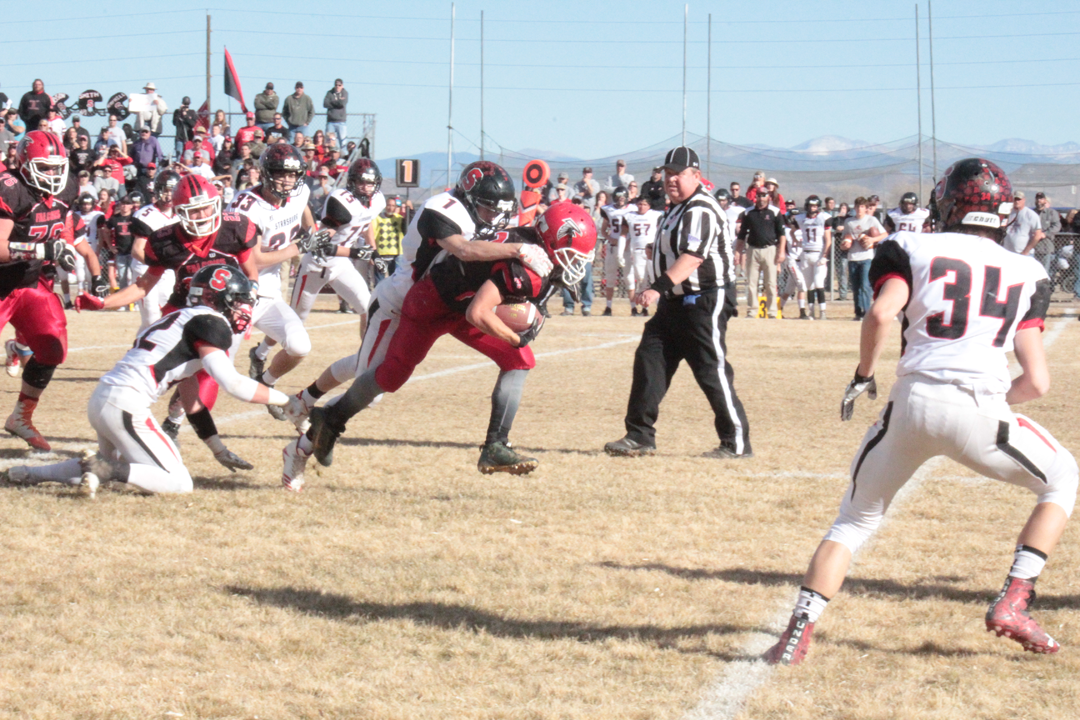 Taj Cornum drags defenders during the second quarter of Saturday's State Championship game. The Falcon's were defeated 10-7 after double overtime.

Defense would reign until midway through the second quarter when Centauri’s offense found it’s rhythm, escorted by three Indian mistakes the Falcons found their way to the Strasburg 11 yard line leaving them room to get a first without getting a touchdown.  A Taj Cornum run and two incompletions brought up 4th and 8 from 9 yards out. The Falcons elected to go for it and failed to convert when the completion to Tristen Crowder fell a yard short of a first down and two yards short of tying things up.

Neither team would score for the remainder of the half; setting up a halftime score of 7-0 Strasburg's favor. Defense again prevailed in the third quarter with nothing but punts and a turnover on downs.
Centauri opened the fourth quarter with possession and a toss in the flat to Brandon Buhr that went 43 yards to the Indian 11 yard line. Cornum got them to the 3 and Nate Anderson punched in the equalizer with eleven minutes to play. The ensuing series on third and long, Strasburg’s Jacob Miller got some open field on a misdirection run with nothing but grass between him and the first down marker. Centauri’s Buhr caught a shoestring and forced a punt to give the Falcons another possession with eight minutes left in the title game. 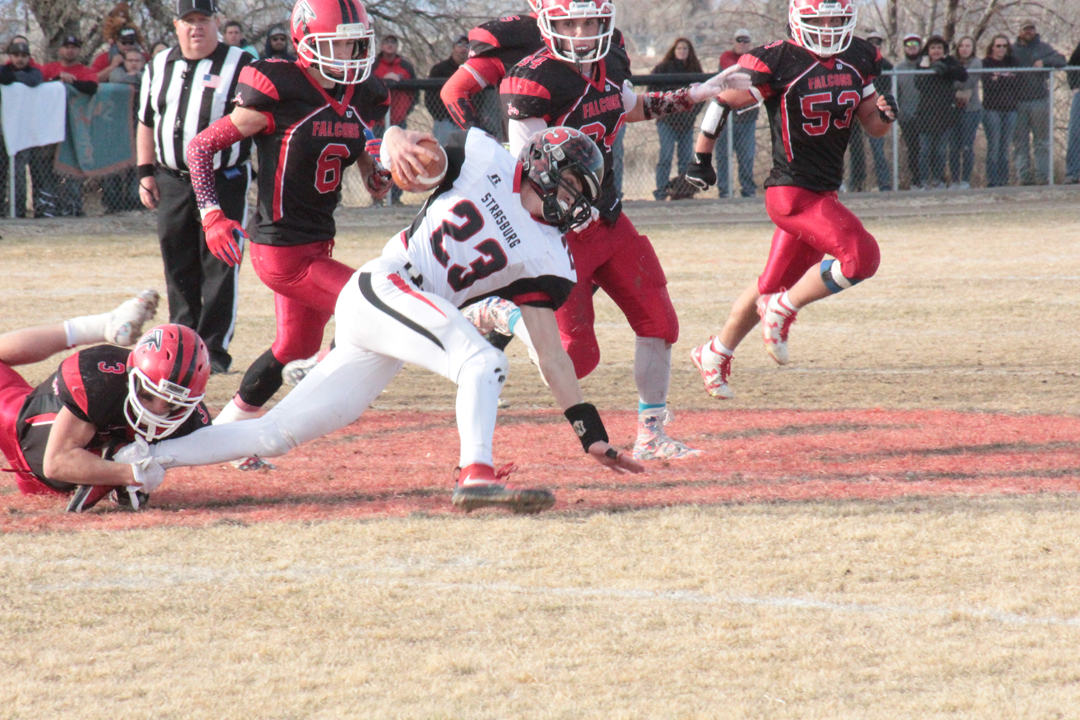 Centauri's Brandon Buhr (3) snags Jacob Miller (23) to force a punt and give the Falcons one more fourth quarter possession.

Centauri had battled all year, now with time winding down they were right where they wanted to be. They just needed to engineer one more long time consuming drive and get points to put themselves in position for a win.  For the next 6 minutes the Falcons put on a clinic, they did things they were familiar with - Anderson to Anderson connection good for 17. They dug into the playbook and pulled out a gem, with another Anderson to Anderson connection this time from Sam to Nate for Sam’s first pass attempt of the season. They accented all that with a healthy dose of Taj Cornum and Nate Anderson on the ground.

Centauri chewed clock all the way to the ten-yard line for a first and goal. Three plays later the Falcons were facing a fourth and three, and again Centauri elected try and convert. Cornum picked up two and Centauri turned the ball over on downs. Strasburg would run out the clock sending the two evenly matched teams to overtime.
Both teams would be given a chance to possess the ball at the ten-yard line with four downs and a time out. Centauri won the toss and deferred, Strasburg went ten yards in the wrong direction before an interception put Centauri in the driver’s seat. With their possession in overtime Centauri had a touchdown nullified by pass interference and after a delay of game fumbled the ball away sending the game into a second overtime period.
Centauri stayed aggressive in double overtime taking the ball to the 2-yard line but failing to convert giving Strasburg another opportunity.

The Indians drove five yards in three plays before calling Carson Spence’s number. Spence's kick was Strasburg’s first field goal attempt in all season, Spence split the uprights giving the Indian’s their second state title in a row. Centauri fought all the way to the title game for the second time in the last 5 years, and while they came short of the ultimate goal that doesn’t lessen their accomplishment or belittle what it took to get there. Centauri and the rest of the top football performers of the valley will be honored on Dec. 6 at 7 p.m. at the Roadway Inn in Alamosa at the All-Valley Banquet.