Falcons take down Moose at home

Melissa Wilson (30) looks past Alamosa's Tara Sowards during Satrurday's win for the Falcons. Wilson had a productive night and led Centauri with 14 points with four 3-pointers.

Entering the weekend the lady Falcons ripped off two straight wins against league rivals Bayfield and Montezuma-Cortez. Thereby alleviating their first loss of the season at the hands of Pagosa Springs on Jan. 26. Alamosa had a great January going 6-2, February has been a different story as the Moose opened the second month with two straight games against the strength of the Intermountain League.  Two tough games and two losses to Pagosa Springs and Centauri.

The Falcons took immediate control posting 14 points while keeping the Moose to two baskets. Centauri junior Melissa Wilson had a big first quarter hitting two 3-pointers in the first quarter. Wilson was 50 percent from the arc with two more treys in the second quarter and led the Falcons with 14 points.

A slow second quarter from the Moose was highlighted by a lone field goal from Lilly Lavier. Lavier would hit one more basket in the third and led Alamosa with 10 points. The Centauri Falcons walked right up to the threshold of foul trouble but stayed in control. Heavy hitters Ember Canty and Caroline Van Berkum each navigated the fourth quarter with 4 infractions apiece without adding a fifth. The victory gives Centauri a 2-0 series sweep over Alamosa.

The boys down in La Jara had been going through the crucible of the 3A Intermountain League entering Saturday’s contest with one win in their last seven games. One can hardly blame them as the IML houses Alamosa, Bayfield and Pagosa Springs all of which carry top twenty ranked RPI scores according to CHSAAnow.com. Meanwhile Alamosa’s boys have taken 11 straight and still sit atop the IML. 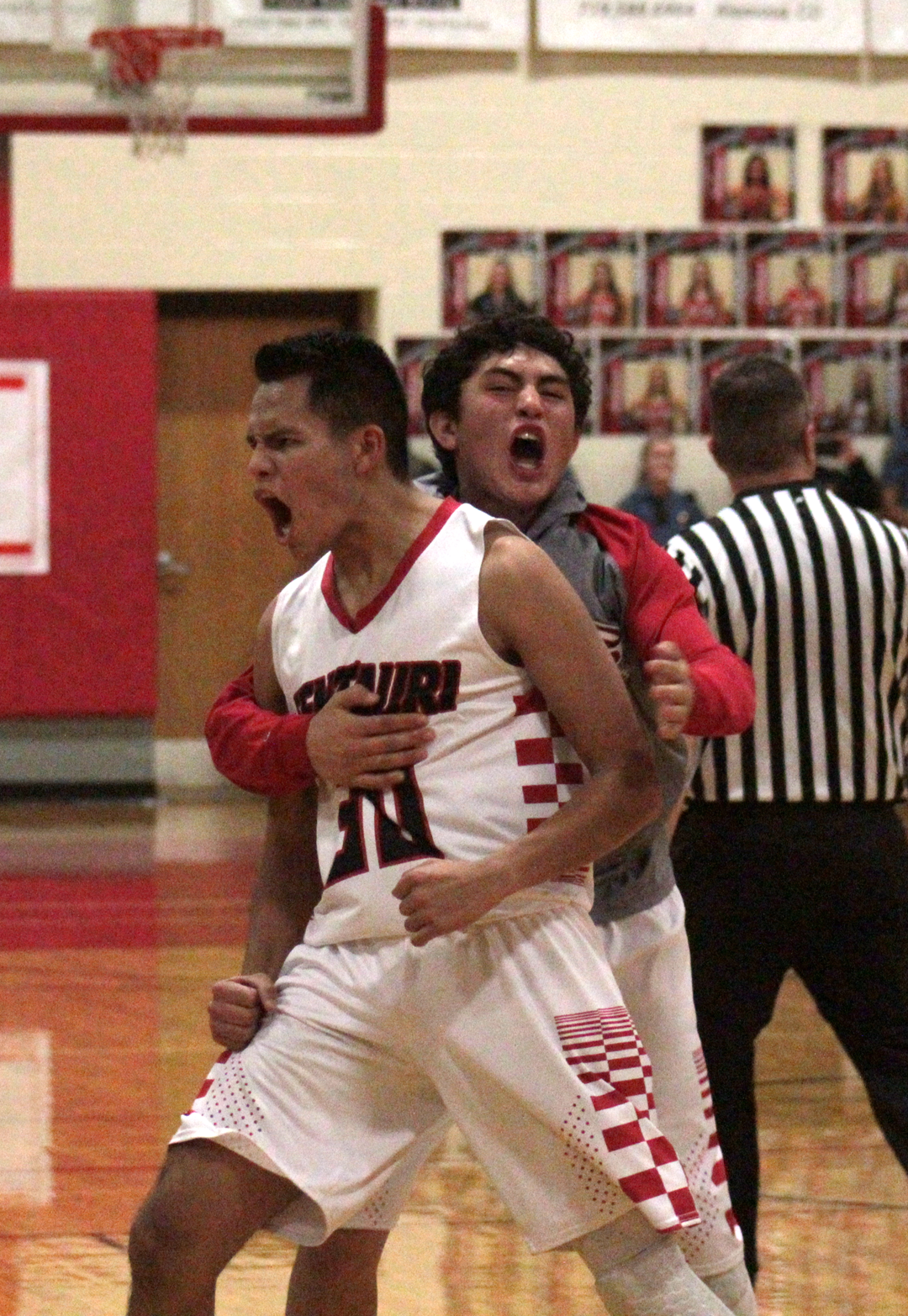 Martin Garcia (30) gets pumped up late in the third quarter against Alamosa by celebrating with a team mate. Garcia was second for the Falcons in scoring with 14 points and went three of four from the charity stripe. (Courier photos by Stephen Jiron)

Alamosa and Centauri played each other tight in the first quarter with ties at 9 and 12 before Alamosa closed the first chapter with a 14-12 lead. Alamosa would fall into a quicksand pit of turnovers and missed opportunities allowing Centauri to blow past them with 9 unanswered points. Noah Romero ended the fast for the Moose with a 3-pointer to make it 23-17.

Alamosa found some much needed offensive rhythm to salvage the quarter and closed the gap to just three at the midway point. Centauri and Alamosa matched each other point for point in the third, leaving the final quarter to decide the 3-point game.

Alamosa collected fouls on both ends of the court while Centauri took off and midway through the fourth already enjoyed a 54-44 lead. Centauri senior Nate Anderson enjoyed his most productive quarter of the night collecting 10 points in the fourth. Anderson led Centauri in points with 15 and rebounds with 4 assists.

With a double-digit deficit and mere minutes to play the Moose saw their slim chances thinned further by the loss of starters Chad Jackson and Angelo Ramirez to fouls. Centauri would dispatch their bitter rival by a score of 66-54 to wrap the series with Alamosa at 1-1. With 19 points, Noah Romero led Alamosa in scoring.

Saturday marks the end of a tough road trip for Alamosa, tonight they get to return to the confines of Alamosa where they will welcome Monte Vista starting with the girls at 5:30 p.m. Centauri will meet Monte Vista in Monte Vista on Feb. 2 and close the regular season with one final challenge from Pagosa Springs Feb. 10.