Find farcical fun with ‘Noises Off’ at AHS

ALAMOSA — Be prepared for sore sides, slammed doors and too many plates of sardines tomorrow night at Alamosa High School during the premiere of “Noises Off.” Slapstick, love triangles, messed-up lines and more all combine into a chaotic scene. The play is meant to be terrible, but the crowd will have a great time.

The comedy, which is not entirely suitable for young children, follows a theater company during a production of a farce called “Nothing On.” Throughout the three acts the audience sees Act One multiple times from different perspectives. First the cast struggles to make it through a technical rehearsal the day before opening night. Then things get interesting in the second act when the audience sees the same play within a play—but a month later—from backstage. The final act shows the front of the stage once more during the last days of the tour.

“Noises Off” features complicated blocking, simultaneous dialog and is English teacher Aaron Zak’s directorial debut. Though he assisted music teacher Kim Waller during the production of “The Wiz” last fall, for the past two months Zak has been the sole director for nine students in front of the stage and 13 behind the scenes.

“There were things I definitely knew how to do and things like ‘Oh, I have to do that? Oh my gosh.’ It’s definitely a learning curve for me,” Zak said.

Zak, who moved with his wife to Alamosa last year to be closer to his family in Pagosa Springs, has spent the previous decade in Boston’s music and theater scenes. There he supported a colleague with multiple school plays and took students to state theater competitions.

“I had always been interested in theater. I’ve done more music than theater just because I played in a lot of bands, but once I started teaching high school and then the theater department, I fell in love. “ 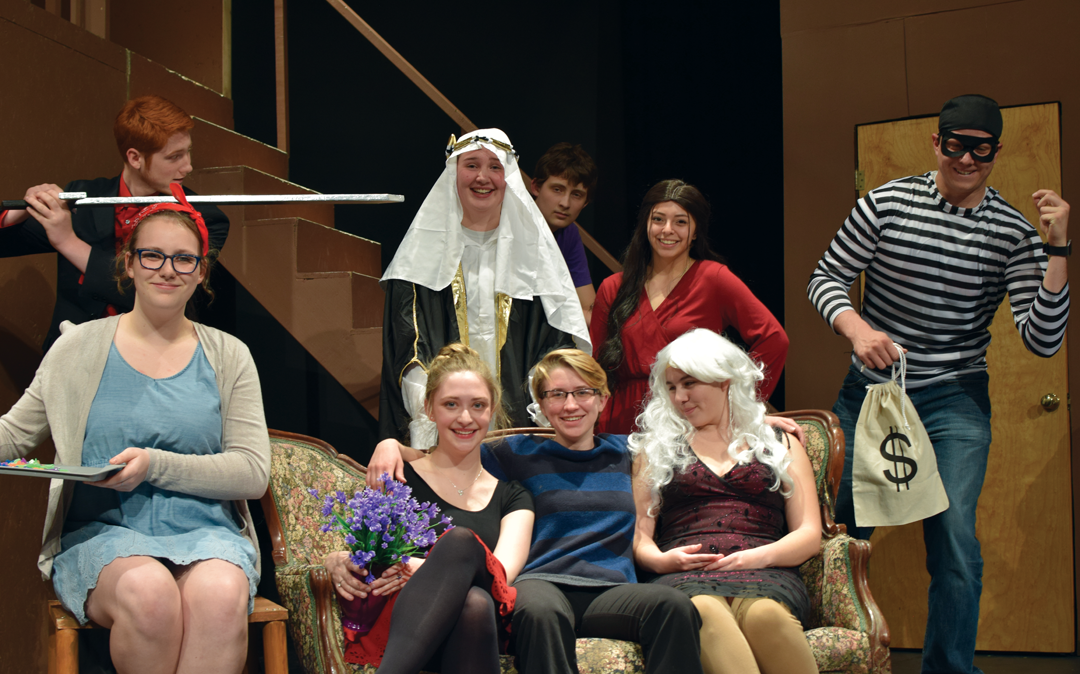 The cast of “Noises Off” gathers around the couch used in the play within a play.

The welcoming students have lent a helping hand to the San Luis Valley newcomer. Directing the play within a play is 16-year-old AHS junior Danielle Daboll. As Lloyd Dallas, she unleashes her temper on the actors but off the set the vibe is friendlier.

“It’s a much looser type of rehearsal and we all add comments on what we think we could do,” said Daboll. “It’s not just like the director is the only one making improvements. It’s been a lot of fun.”

Along with Jasmine Cody, Daboll is one of two women casted against gender in the play. Daboll isn’t bothered by playing a man and in fact wanted to be one from the start so the play could get off the ground.

“At least four times this year I’ve been mistaken for a dude,” said Daboll, “so I kind of figured I could play a dude and get away with it, which a lot of girls wouldn’t be able to do because they look like girls. I auditioned with that intent and told them ‘you don’t have enough guys, so cast me as a guy.’”

Aiding Dallas is stage manager Tim Allgood, played by 15-year-old sophomore Parker Weathers. Allgood also doubles as Philip Brent and the burglar when the other actors are indisposed, adding to the comedy of errors. Weathers enjoys it more than the dramatic plays he’s done in the past and likes how if the students make actual mistakes no one in the audience will notice.

“Some of the mistakes we make when we’re trying to make other mistakes, so we’ll just leave them in and it’ll be really great,” Weathers said. “Personally I like this a lot more because it’s a lot more fun and friendly environment.” 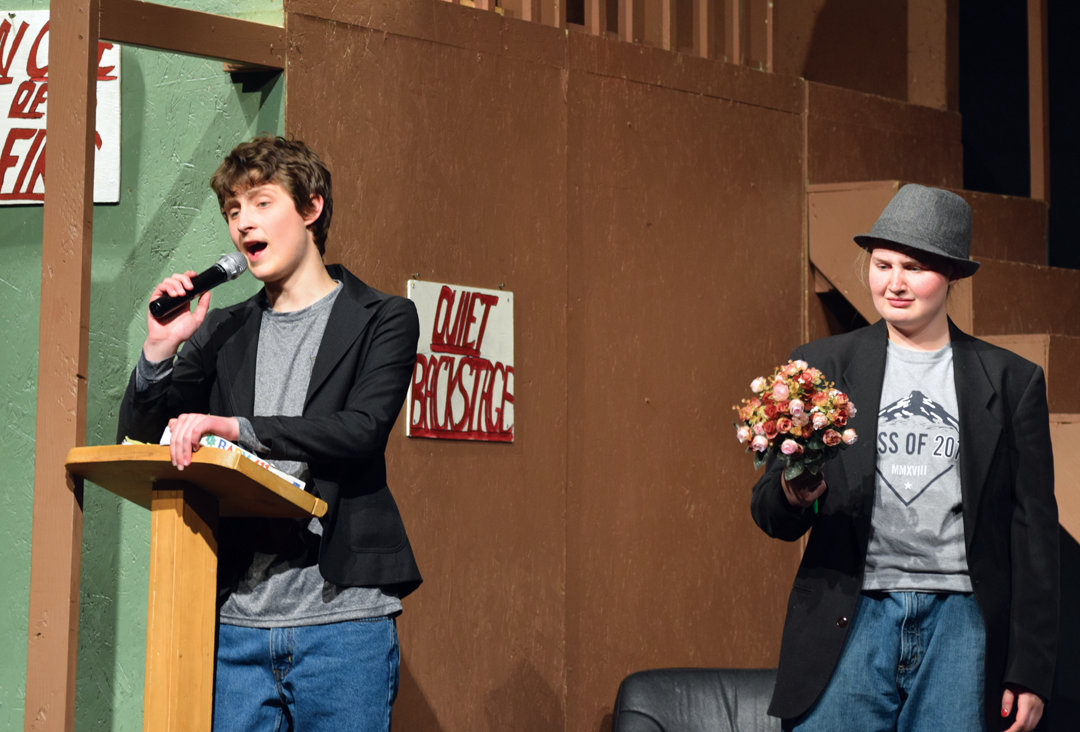 Stage manager Tim Allgood (Parker Weathers), left, misreads the showtime for “Nothing On” as Frederick Fellowes (Jasmine Cody) confusedly holds a bouquet of flowers not meant for him. The second act of “Noises Off” takes place backstage of the play within a play.

Playing Dotty Otley, the top-billed, middle-age television star returning to theater, is freshman Morgan Hollingsworth, 15. It is her first play after participating in Ortega Middle School’s theater programs and though she prefers musicals she’s enjoying her time branching out into acting.

“It’s very hard not to break character and laugh because it’s such a fun show,” Hollingsworth said.

That zany humor is party why Zak chose “Noises Off” instead of something more somber. At first he wanted to produce “The Crucible” since it’s relevant to the semester’s curriculum and current politics, however, he ultimately decided against it.

“I had wanted to do that but the kids expressed a lot of concern over that because they’re exhausted, sensitive and it’s a heavy play.”

When Zak read the “Noises Off” script, recommended to him by OMS teacher Adriana Chapa, he was hooked. “As I read through it I was like ‘This is freaking hilarious!’ The levels of it appeal to me and I thought we could have a lot of fun.”

Yet the script couldn’t be performed at a high school untouched. Zak toned down the more mature language and gave alcohol bottles a cartoony feel to transform it for a younger audience.

“I think we found a way to kind of PG-13 it up while still maintaining the integrity of the humor.”

While creative liberties had to be taken, the audience won’t find anything lacking during the show. “If you just want to see a bunch of bad actors doing a bad show, come out and see it,” Zak said.

Above caption: Lloyd Dallas (Danielle Daboll), left, directs Dotty Otley (Morgan Hollingsworth), Belinda Blair (A.J. Iraheta) and Frederick Fellowes (Jasmine Cody) at a technical rehearsal of “Nothing On” inside the farce “Noises Off.”

Cost: $8 for adults, $5 for students and seniors. Tickets are purchased at the door or can be purchased in advance from AHS English Teacher Aaron Zak.