ALAMOSA — A Wednesday morning fire at El Super Taco in Alamosa caused fire and smoke damage to the eatery at 415 Main Street as well as some smoke damage to a storeroom in the adjacent Hunan Restaurant.

Alamosa Fire Chief Don Chapman said the fire department was called out at 7:55 a.m. on May 10 to a report of fire at El Super Taco.

He explained that the fire began with a pot of food on the stove that began to burn after it was left on and unattended. The hood system caught fire, causing damage to the wall behind the grill. The entire restaurant also sustained smoke damage, according to Chapman.

“It was contained to El Super Taco,” the chief said, although he added there was some smoke damage primarily in a storeroom in the adjoining Hunan Restaurant.

“We were able to knock it out pretty fast,” he said.

“If we have anything of any size, we try to get back up moving right away,” Chapman said. From the way the call came in, it could have developed into a major fire, Chapman explained. Fortunately, firefighters were able to contain the fire and keep it from spreading to adjoining businesses. 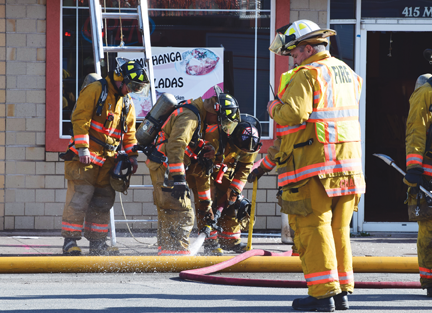