ALAMOSA — It was a cartoon that saved the life of Windsor Bauders’ first child.

Windsor, whose famous grandfather was Rev. Billy Graham, was a pregnant teenager who was contemplating her options — including abortion — especially since her baby’s father wanted nothing to do with the baby.

“My story is not pretty. It’s downright ugly, messy and embarrassing,” Windsor said Tuesday night during the San Luis Valley Life Center’s (formerly SLV Women’s Resource Center), annual fund-raiser in Alamosa. “But this is my story.”

Windsor was 16 when she told her mother she thought she was pregnant. The baby’s father did not want anything to do with the baby. Windsor was in high school, had no job “and now there was no father.”

Her choices were abortion, adoption or keeping the baby. She and her mother argued and could not agree on anything, “typical mother/daughter relationship,” she recalled.

She lived in a small town, but there was a women’s center devoted to life that gave her resources she could use.

The clincher for her decision, however, was a cartoon she saw at her high school. The cartoon pictured a man shouting at God about where were the cures for AIDS and cancer, and where was peace, and God shouts back, “you aborted them all.”

“Ultimately it was the cartoon that decided my baby’s fate,” Windsor recalled.

Although Windsor’s pregnancy was not obvious, she lived in a small town where everyone knew everyone else’s business, so she went to a home for unwed mothers.

Windsor was miserable and called her mother every day to remind her how miserable she was. The best part of her time there was her roommate who after 24 years is still her best friend.

Windsor was then able to live with a family in Philadelphia, although living in a big city was a shock for someone from a small town. She and the mother in that home, Sarah, talked about her plans for the future, once her baby was born. Windsor’s mother was adamant she and her baby could not live with her, and although her father said she could live with him, she did not have much of a relationship with him.

Sarah had been counseling another pregnant teen in the home about adoption, and Windsor came across the profiles of families interested in adoption. One of them jumped out at her. The parents were a special education teacher and a lawyer, and Windsor had had special needs in school and “could argue the leg off a table,” so she was drawn to this couple. She was still determined to keep her baby daughter, but she thought if she was going to give her to anyone, it would be this couple.

She wanted her daughter to have a daddy — “not a father, not a dad, but a daddy.”

Although she knew she could give her baby love, because she loved her with all of her heart, she did not have other resources to take care of her, so she made the decision to adopt her to this couple.

When the time actually came to give her up, however, she didn’t want to do it. “I changed my mind a dozen times.”

She was able to spend a few days with her baby daughter before delivering her to the adoptive parents. It went against all of her motherly instincts to give her up, and she “wailed” when she made the final surrender.

“Somehow I got the strength to hand her over to her new family, one with a mom and a dad. It was ripping out my heart.”

She went home with her mother and cried herself to sleep.

Windsor lived with a numbness and aching and hated herself. She moved in with people who were not good for her. She began dating a boy who helped ease the nagging ache in her heart for her daughter. Seven months after putting her baby girl up for adoption, she found herself pregnant again.

This time she considered abortion more than the first time, but again she decided to carry the baby to term, and on a cool November day her second child was born, this time a son.

“We spent seven years doing what we had to do,” Windsor recalled. “I made a lot of mistakes. In spite of me he’s turned out to be a pretty wonderful 21-year-old.”

She also met a good man, her “prince” after “a lot frogs,” someone who believes God brought them together because if she had made different choices, they never would have met.

The couple had a daughter who helped bring healing for the baby girl Windsor was not able to raise. She then had a son, now 8, who was born with health complications and spent 151 days in ICU and went through four major surgeries before he was able to come home.

Windsor now has health issues of her own and suffers from an illness that has no cure at this point. She said she hopes to live a long time, but “honestly, I am scared to death.”

She said she has taken the stand for life from beginning to end so hopes she will be able to stay strong in that choice when her disease progresses and assisted suicide might seem appealing.

She concluded, “I believe we have an amazing God who knows what He is doing and always has a plan for what He’s doing.”

In addition to sharing her experiences, Windsor talked a little bit about her grandfather and the influence he had not only in her life but also in the nation. She thanked those who had offered their condolences to the family on the loss of this great man the grandchildren had called “Daddy Bill.” She said when asked about his one regret, he replied that it was that he did not lead more people to Christ. His death at age 99 was the largest crusade he ever had, with newspapers all over the country writing about him, hundreds of people lining the road as his body was transported, drivers of 18-wheelers stopping and holding their hands over their hearts and statesmen speaking kinds words about him as his simple casket lay in the rotunda at the nation’s capitol.

“We were so touched by it all,” Windsor said.

Referencing Psalm 127:3, Windsor said “Children are a gift from the Lord; they are a reward from him.”

She urged support of the life-promoting work of the San Luis Valley Life Center, which unveiled its new name on Tuesday. (See www.slvwrc.org/, call 719-589-6698 or stop by 3211 Main Street Suite E, Alamosa.)

The center offers free and confidential services including pregnancy tests, STI tests, post-abortive support, ultrasounds, parenting classes and baby items. The center served 329 clients last year, all for free, and is on track to serve at least that many or more this year, Windsor said. Although the services are free, they cost the center. For example, each ultrasound costs $152.

The paid staff is minimal with many volunteers assisting and both men and women welcome to help with the services at the center and on the Adams State campus through the ESRA Club.

Windsor said no act or amount is too small, as she reminded those in attendance, “It was a small cartoon that saved my baby’s life.” 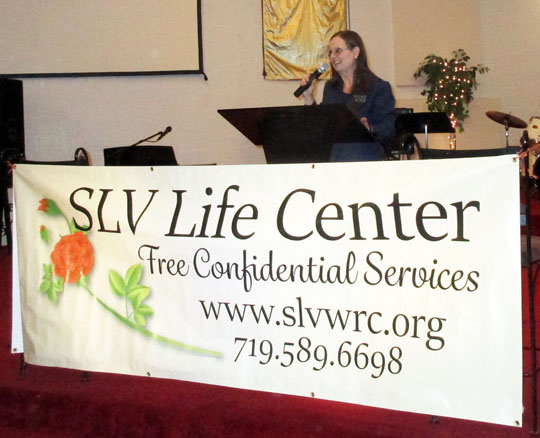 Director Debora Black unveils the new name of the former SLV Women’s Resource Center as the San Luis Valley Life Center on Tuesday night. She said the board wanted a name that better reflected the group’s mission and ministry, which is for both men and women dealing with pregnancies. The center also offers free STI testing and treatment. 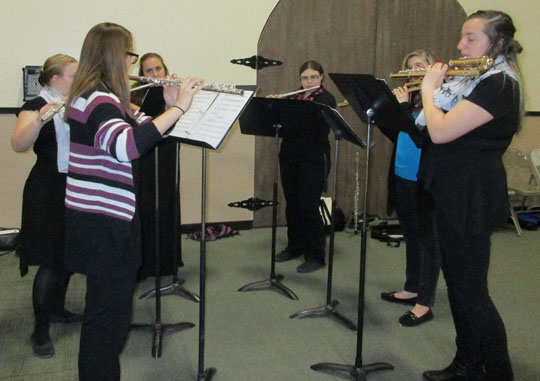