DENVER – On Thursday people from the all over the San Luis Valley and beyond poured into the Pepsi Center in scenic downtown Denver to watch as the Colorado State Wrestling Tournament got rolling with preliminary matches. To start the weekend the 3A schools had sent 19 athletes in search of a first place finish at state; after Thursday 11 were still in the hunt.

Alamosa has quite the team and it showed in the first day with seven of their 11 state finalists taking wins in the first round. Regional champions Davian Chavez, Elijah DeLaCerda and Joe Chavez all got things going in the right direction with three Alamosa wins. Davian Chavez made a quick appearance with a pin at 1:24 to take his win. For DeLaCerda it wasn’t any more difficult winning by a fall in 1:42. Joe Chavez wore out Levi Raines of Strasburg with a 16-1 technical fall. Up next for Chavez will be 34-5 Alexxander Vigil. Reis Martinez also advanced to the quarterfinal matchups with a 7-3 decision to tally his third win of the season.

Centauri also had a great first day at state with 80 percent of their qualifiers advancing towards first and second place. Top ranked Brandon Buhr tanked his opponent with a 19-3 technical fall to continue on. Brandon Shawcroft also of Centauri got a fall in the third minute to punch his ticket to the quarterfinals. Things don’t get any easier for Shawcroft as his next opponent Wyatt Pfau owns a 42-4 record, and beyond Pfau quite possibly lies undefeated Jaziah Whaley of Valley. At 132 pounds Zach Martin earned a 9-8 decision and will face undefeated Anthony Quintana of Buena Vista who sports a 37-0 record.

In 2A the field was fiercely competitive. With 14 athletes from Valley schools in attendance only five made it out of the first day unscathed. Del Norte will still have three boys striving for first and second place finishes. Dillon Salter took a 15-6 major decision on Thursday. Salter still has a way to go to avenge his loss to undefeated Dalton McGhee of Fowler at regionals. Since they were aligned at opposite ends of the bracket the rematch would have to take place in the championship match. Both Cobie Black and Brett Benevides took first day wins to advance to quarterfinals for Del Norte.

The final two wrestlers to advance from 2A are Max Salazar of Sanford and Juanito Garcia of Center, both in the 106 bracket. Salazar and Garcia advanced with a fall and a major decision respectively. Their first meeting would be in a semi final match at 7 p.m. tonight, given they both advance from the quarterfinals.

Sierra Grande/Centennial’s three wrestlers Richard Atencio, Alejandro Velasquez and Isias Minchaca will be competing for a third place finish as the tournament continues. As the lone competitors from their respective schools Isiah Wellman of Mountain Valley and Ethan Maxwell will continue in the consolation brackets. Day two of the state tournament kicks off today at 9:30 a.m. with 2A/3A’ championship quarterfinals and will continue once again at 5:30 p.m. with the consolation bracket and semifinals at 7 p.m.

Captions: Alamosa's Logan Thompson uses his superior position to score in the final match of the afternoon. Thompson won the match by a 6-1 decision and will face 35-4 Drew Book in the quarterfinals. /Courier photos by Stephen Jiron 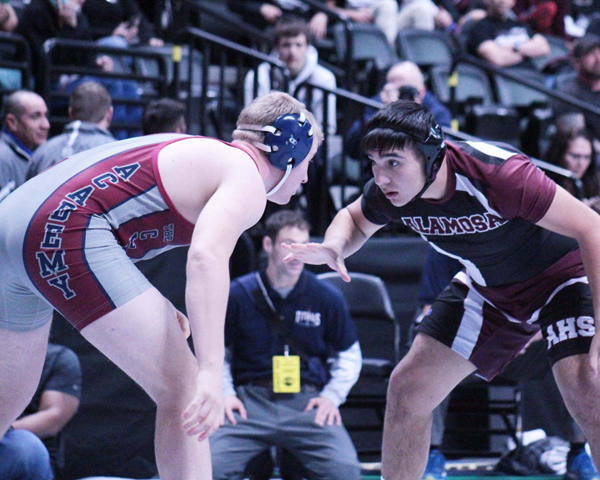 Zendon Bernal of Alamosa, right, faces down his opponent during his preliminary match on Thursday. Bernal would fall in an 8-6 decision and is currently shooting for third place today. 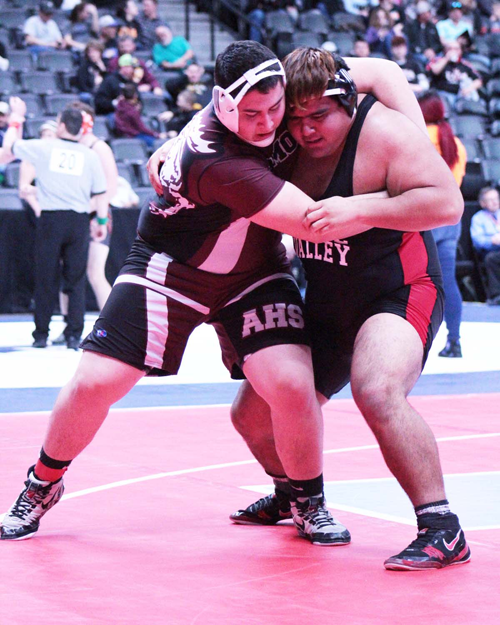 Preston Duran looks for a takedown on Thursday afternoon. Duran would take his preliminary match and advance to the quarterfinals as one of Alamosa's finalists. 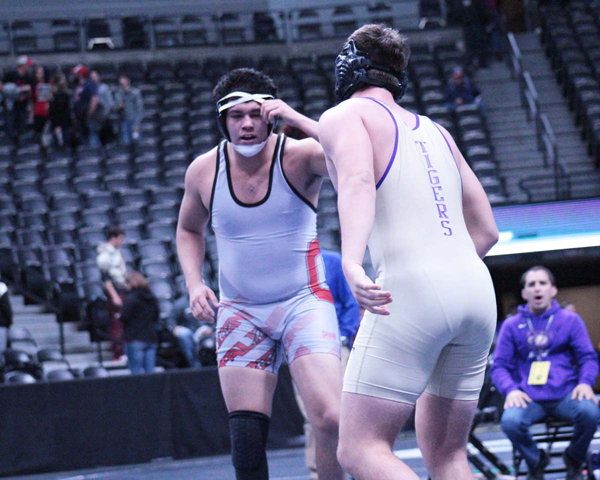 Centauri's Bennie Chacon adjusts his headgear before he and Cade Carter continue. Chacon would go on to win in a 5-1 decision.