MONTE VISTA — Hemp is a viable alternative crop for the San Luis Valley but not without its challenges, presenters told attendees Wednesday morning at the 2018 Southern Rocky Mountain Agricultural Conference and Trade Fair in Monte Vista.

Presenters expressed both optimism and caution about growing hemp, which seems well suited to the Valley climate, requires less water than other crops, is resilient and relatively disease resistant and appears to have an expanding market, especially in organic markets.

On the other hand, organic certification might be difficult to obtain and bank financing impossible. There are also harvesting challenges, although equipment and methods are being refined to deal with those. There are no approved herbicides or pesticides for hemp but not much need for them either, presenters explained. Hemp is also not yet approved for animal feed.

Many of the challenges associated with hemp are related to its “guilty by association” relationship to marijuana, which is still illegal in much of the U.S.

Long history, many uses
Dr. Rich Fletcher, co-founder of Fort Collins-based New West Genetics, a hemp breeding company focused on varieties adapted to Colorado, gave a brief history lesson of hemp, which originated as a crop in southeast Asia but did not make its way to Europe until about 2000 B.C. and eventually to North America by way of Canada. Its uses were primarily for food and fiber, Fletcher explained.

In 1776 the founding fathers drafted the Declaration of Independence on hemp fiber fabric/paper, Fletcher said, and its production was not curtailed until the Marijuana Tax Act of 1937 placed high taxes on hemp and marijuana production, with further regulations restricting it in the 1970’s when cannabis was placed on the Schedule I drug list.

Colorado passed Amendment 64 in 2012, which permits recreational cannabis use as well as hemp production, and the 2014 Farm Bill authorized hemp production in states in which there’s a hemp program.
That farm bill also defines hemp as a cannabis species and sets a limit on the THC (the compound “that gets you high”, Fletcher explained) in hemp at .3 percent. “One percent or less is not going to get most people high,” he said. 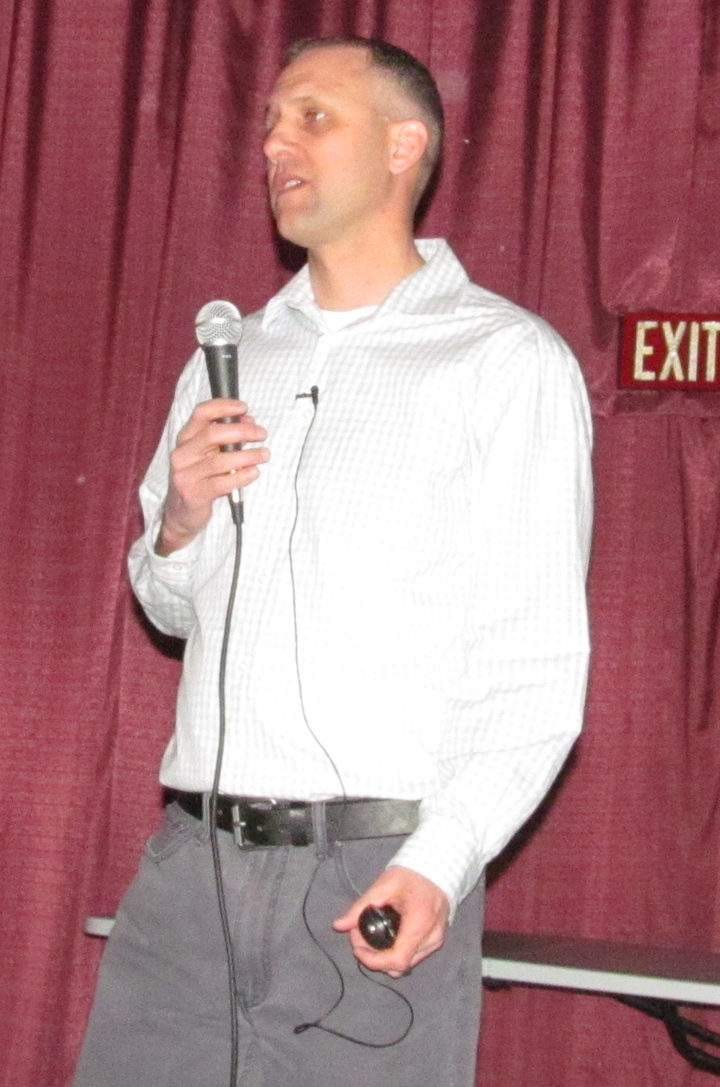 Hemp must contain .3 percent THC or less, and if a crop tests higher than that, it will be destroyed, so it is important for growers to use certified seeds that reduce that risk, presenters said.

Products that can result from hemp are versatile, Fletcher said. He referred to a 1938 “Popular Mechanics” article that shared some of the different uses and described hemp as the “billion dollar crop” because of its versatility.

Fletcher and other presenters described the plant itself, which is dioecious (requiring male/female plants) with different parts of the plant used for different purposes ranging from food to fiber and perfumes to supplements. Fletcher said hemp has been described as a plant with 25,000 potential products, and he believed that was true.

As a food source, it is high in protein, for example, as an oil, it can be used in body care products, and as a fiber it can be used for paper, clothing and many other uses, Fletcher explained.

Avoid hemp ‘gold rush’
Markets for hemp include grain and fiber, although hemp products cannot be used for animal feed yet, Fletcher said. Paperwork is pending to register it as a livestock feed, but he did not know when that might happen. As far as human consumption, hemp products range from granola bars to salad and cooking oils. Its other uses range from paper products to construction materials and medicinal products.

It is also finding a niche in craft brewing, Fletcher said. “This now gives brewers a whole new opportunity to create flavors they hadn’t been able to create before,” he said.

Fletcher used Canada as an illustration of the importance of growing markets before growing the plant itself. Canada began hemp production in 1998 with 5,000 acres and immediately jumped to 35,000 acres, but there was not a market for that much at that time, so the crop fell back drastically and took another seven years to reach that same 35,000-acre mark.

The lesson is to make sure there is a market before jumping into the hemp “gold rush,” Fletcher said.

“Don’t just grow it and figure where you are going to take it to,” added Maya ter Kuile-Miller, Cactus Hill Ag Consulting, La Jara. 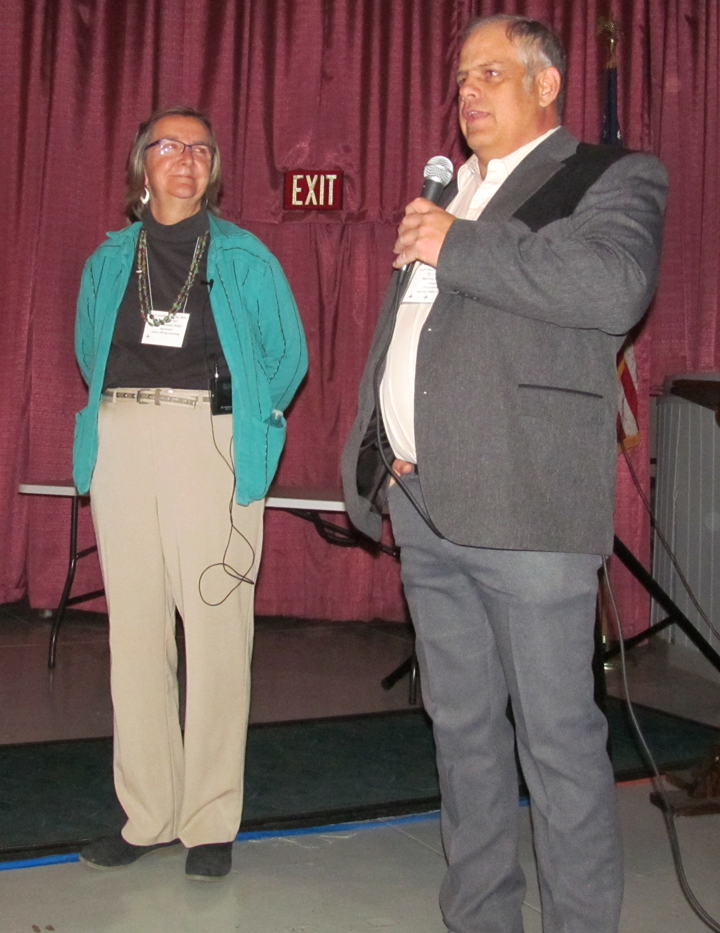 Mitch Yergert from the Colorado Department of Agriculture said registered hemp acreage has increased from 1,811 acres in 2014 to 12,024 acres in 2017 and as of February 1 of this year, 12,609 registered acres involving 432 registrants.

“It is growing,” he said. “Hemp is widespread in Colorado.”

Yergert said there are hemp registrants in 50 of Colorado’s 64 counties.

In the San Luis Valley, there are 20 registrants in Alamosa County; 12 each in Costilla and Saguache Counties; four in Rio Grande County; and three in Conejos County.

“The Valley is a big player in the hemp industry,” Yergert said.

Bruce Bernstein of UBIX Processing, who was part of a panel at the conclusion of the hemp presentations, said, “I do think this is an optimal place to grow hemp. The market is growing nicely … I am very optimistic about the economic impact it will have on the Valley.”

Keeping it legal
Yergert talked about the state’s role in hemp regulation, such as testing for THC and THCa. He said legislation continues to be refined and clarified to accommodate this industry, keep it above board and make sure producers understand what is permitted and required.

“We want to maintain the greatest integrity we can with the program,” he said. 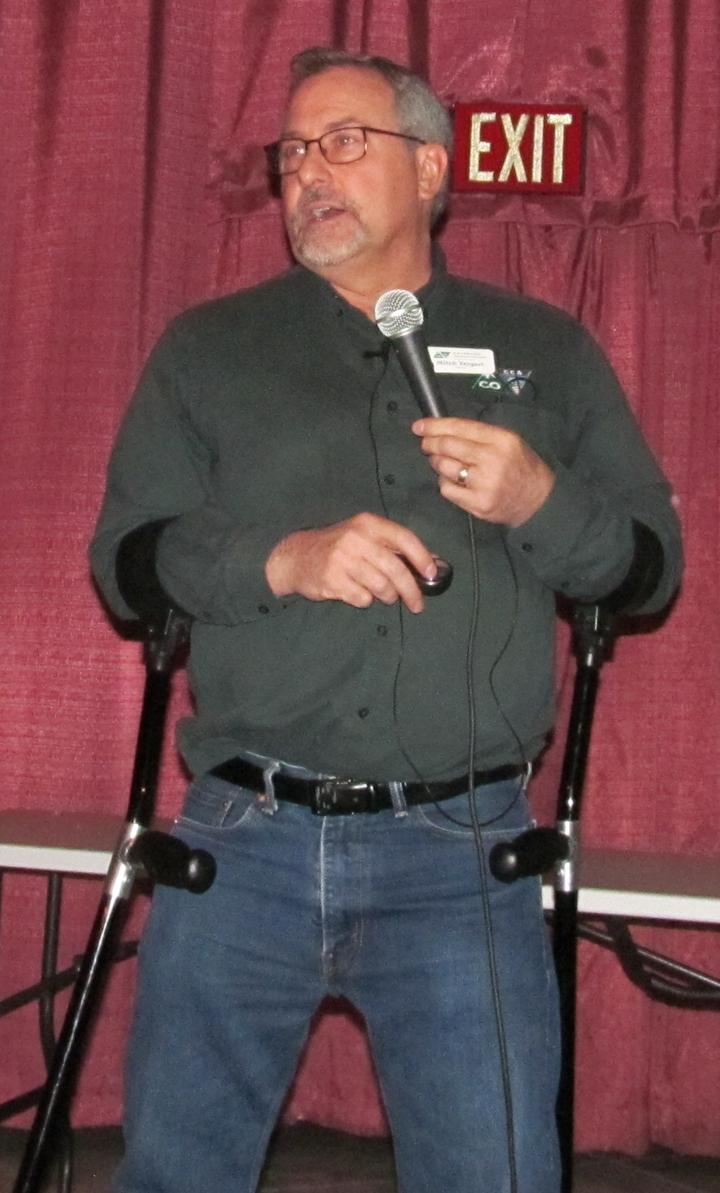 He encouraged those interested in growing hemp to familiarize themselves with the rules governing this crop in Colorado before they plant and make sure they turn in timely reports afterwards so they will stay in compliance.

He said CDA is developing the seed certification program, which is not typically a function of CDA but in this case, with the nature of cannabis, it falls under CDA’s jurisdiction. He and other presenters emphasized the advantages for growers to go with CDA approved certified seed “to make sure when you plant a crop it’s going to be below .3 percent THC” and to have seed that is weed and disease free and of good quality.
ter Kuile-Miller added, “I can’t stress how important it is to get good seed, certified seed.”

Good rotation crop
ter Kuile-Miller described the growing process, equipment necessary for planting, water amounts and frequency and harvesting process. For example, a Monosem drill works very well for planting, she said. The seed is fairly delicate and is planted anywhere from a half-inch to an inch deep. She recommended planting 20-30 pounds per acre. She also encouraged soil tests before planting. Regarding watering, she recommended watering prior to planting and then not again until after the plants emerge. The seeds take 8-14 days to germinate and emerge.

“Hemp is really tough and resilient,” ter Kuile-Miller said. “It really is a great rotation crop for the crops that we grow.”

She said hemp actually eliminated nematodes in some fields. She said while Canada has had problems with white and gray mold and head blight in hemp crops, those haven’t appeared in Colorado.

She spoke about the use and amounts of various fertilizers such as nitrogen, phosphorous, potassium and sulfur and said if hemp is rotating in after potato or alfalfa crops, “you may not need to do any fertilizer at all.”

Hemp is also a low-water use crop, ter Kuile-Miller said, averaging 11-12 inches but able to manage with 6.5-7 inches. It is important not to overwater the crop, she emphasized.

Hemp farmer Dion Oakes of Wright-Oakes Farms said yield in the Valley has been 700-1,200 pounds per acre.

Oakes said, “Harvesting has come a long way.” He said Power Zone Equipment in Center has come up with creative ideas to harvest hemp. 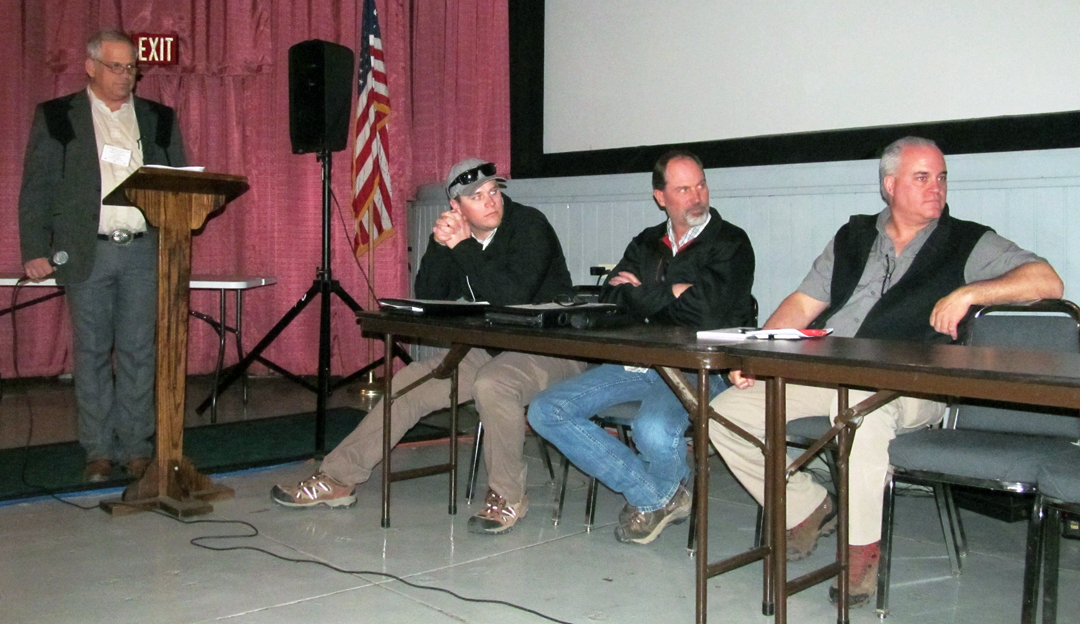 Power Zone Equipment Vice President Corbett Hefner said the company can work with farmers to design equipment they need and specialize it to hemp harvesting, as it has with Wright-Oakes Farms. “We will figure it out.”

Still some challenges
ter Kuile-Miller and others spoke about organic hemp. She said it is easy to grow hemp organically but not necessarily easy to get it certified organic. She said there are five operators that are certified as organic in Colorado.

Matt Birkholz, with Colorado Hemp Works, the largest hemp seed processing company in the U.S., said his facility was certified organic, and he encouraged organic hemp production because it draws better prices.
“Organic products fly off my shelf. I can’t keep them in stock,” he said. “Organic hemp is high demand and short supply.”

He said his company is purchasing seed for 80 cents a pound or $1.25 a pound for organic.

ter Kuile-Miller and other speakers also reminded growers to not expect to get bank financing for hemp, because banks are still under FDIC (Federal Deposit Insurance Corporation), with federal restrictions on cannabis. Farms that are under federal conservation programs cannot grow hemp either, she added.

They told farmers although there are challenges like these associated with hemp farming, it still presents a viable agricultural option in the Valley.

Wednesday’s hemp presentations will be shared on the SLV Extension Service website.

Caption: Bruce Bernstein of UBIX Processing shares his outlook on hemp as a viable crop for the San Luis Valley during the panel discussion that concluded Wednesday’s hemp sessions during the agricultural conference and trade show in Monte Vista. From left are Bernstein, Matt Birkholz, with Colorado Hemp Works and Monte Robertson, SLV Hemp founder who was instrumental in putting Wednesday’s program together.