Del Norte had their Senior night on Friday (from left) Brett Benevides, Tejay Kemery, Cobie Black, Dillan Salter, Narsiso Rodriguez and Carlos Parra. The seniors were honored before the game to applause and a fireworks display.

DEL NORTE—Junior Keegan Medina and the Tigers showed what their shotgun was capable of posting 55 points on the reeling Thunderbirds.

The opening possession went to Sangre de Cristo and after going 3 and out the punt snap was mishandled and gave the Tigers first and goal from the ten. The great field position was immediately capitalized on by Medina who fired one to fellow junior Izeah Peterson for a touchdown to make it 6-0. 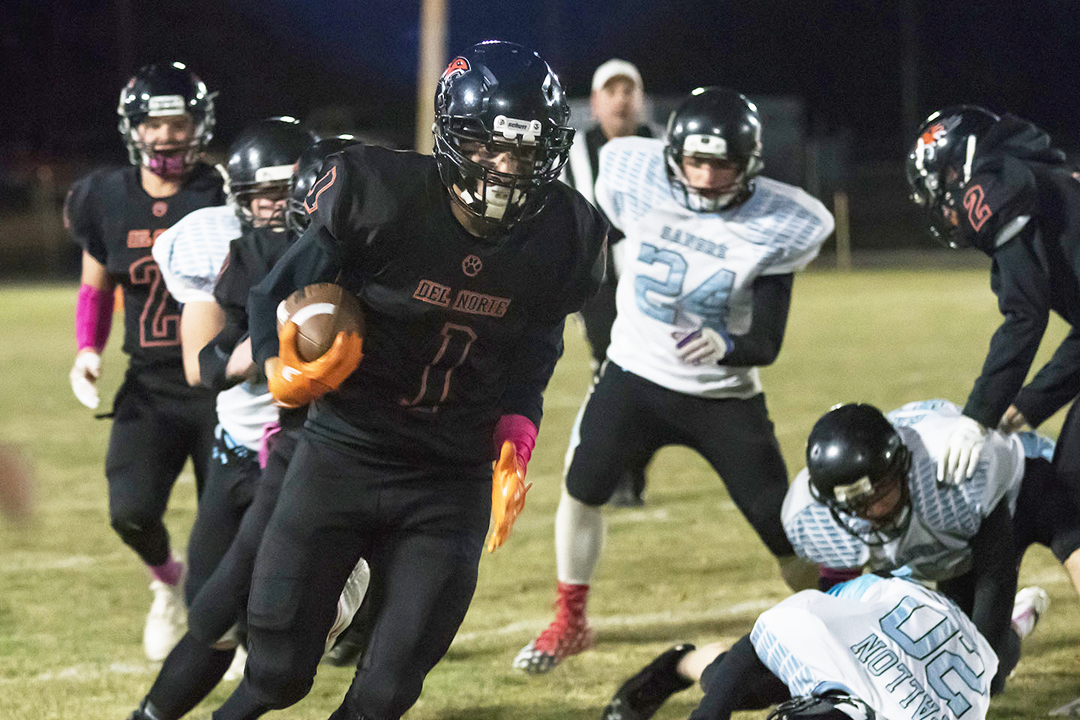 Del Norte receiver Izeah Peterson gets up field in a hurry after the catch in Del Norte's 55-16 victory over Sanger de Cristo on Friday night. Peterson accounted for 3 of Del Norte's touchdowns two by reception and the third after returning a free kick for a touchdown.(photos courtesy Aaron Parrill)

On the ensuing possession Del Norte forced another three and out and blocked the punt out of the end zone for a safety to make it 8-0. Peterson would take the free kick for a touchdown to put the Tigers ahead 14-0 having only taken one offensive snap.

Sangre would log some time of possession driving the ball 38 yards to Del Norte’s 26 yard line before turning it over on downs. The Tigers took it 74 yards and the Medina Peterson connection closed out the drive and the first quarter with a 20-point lead.

A 49-yard touchdown pass to senior Carlos Parra put Del Norte up 27-0 early in the second stanza. Sangre de Cristo had enough and decided to end the shutout. Taking the kick-off all the way to the Tiger 25.  Seven plays later Quarterback Manuel Lopez would scramble from 13 yards out to put the T-Birds on the board and an end around to Tristin Franks cut the deficit by two more points, 27-8.

Both teams traded blows each posting a touchdown before the midway point for a 34-16 game. The third quarter was all Del Norte as they racked up three more touchdowns to put the game firmly out of reach 55-16. Since neither team reached the end zone in the fourth quarter it also wound up being the final score.
Medina threw for five touchdowns of the Tiger's eight, 3 to Parra and 2 to Peterson.

Junior Manuel Lopez tallied both touchdowns for the Thunderbirds.  Not counting tonight’s victory the Tigers sit at number 22, the Tigers will be looking to further climb the RPI rankings when they welcome the winless Nederland Panthers to Del Norte to close their season next week Oct. 27 at 1 p.m.

Sangre de Cristo will close their season on the road in Sanford for the Indian’s Senior Day and Parent Appreciation game Oct. 28 at 1 p.m.