ALBUQUERQUE, NM – San Luis Valley 4-H members Taylor Adams and Julie Wisener battled 41 other teams to take home first place in the Middle School Joust event at the RoboRAVE International robotics competition. The event was held May 10 to 12 at the Albuquerque Convention Center in Albuquerque, New Mexico. Four other 4-H youth robotics teams from the Valley also participated in the contest, which drew more than 1500 competitors from 20 countries.

Adams, 8, of Monte Vista, and Wisener, 10, of Alamosa, worked with their coach Seth Adams to build a jousting robot for the competition. The robot had to be able to carry a water bottle knight and follow a line. During the event, the team faced off in joust matches where they tried to knock their opponent’s knight off.  The team placed in the top eight in preliminary matches, which qualified them for the event tournament. In the tournament, they vanquished three opponents from the United States and Mexico to take first place.

Cali and Carson Wolfe entered the SumoBot challenge. In this event their robot was pitted against others to see who could push their opponent’s out of the ring first.

Garcia and Snyder also took home second place in the FastBot event. This contest is a drag race, where teams add gearing to their robot in an attempt to get it to cross the finish line first.

This was the 17th annual RoboRAVE International robotics contest, and the fourth time that local teams have participated. The event is a way for SLV 4-H Robotics members to apply the programming, building, teamwork, and troubleshooting skills they’ve built throughout the season. The next competition for local teams will be the San Luis Valley Fair Challenge in August. 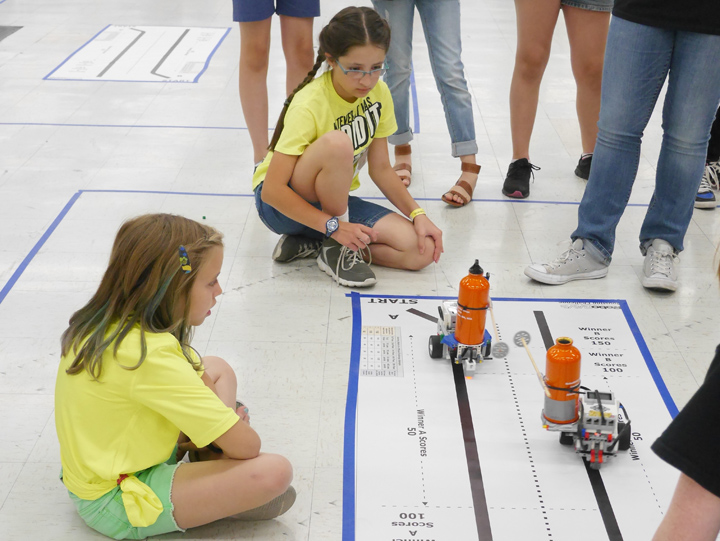 Taylor Adams (left) and Julie Wisener (center) watch their robot battle an opponent in a joust match during preliminary rounds at RoboRAVE.

First Patron of the Arts Awards given