ALAMOSA—With hundreds in attendance, Nemesis Promotions kicked off the first annual Angelo Duarte Wrestling Scholarship fights. With local talent Omar Gonzalez, Isaac Lopez and Sonny Yohn billed the fights were an event that drew a great crowd for a great cause.

The fight took place at 135 pounds with it being the first of David Archuletta’s career.

The two fighters came out cautious with Archuletta settling in and finding some success with a late flurry to score before the close of the round. Santana won the first with consistent scoring testing the waters with leg kicks and jabs.

The second round Santana had more leg kicks in the store and even started aiming them for the head while Archuletta worked off the jab to build combos. After falling behind on the cards Archuletta worked hard in the third really pushing the pace but still lost by unanimous decision from the judges. 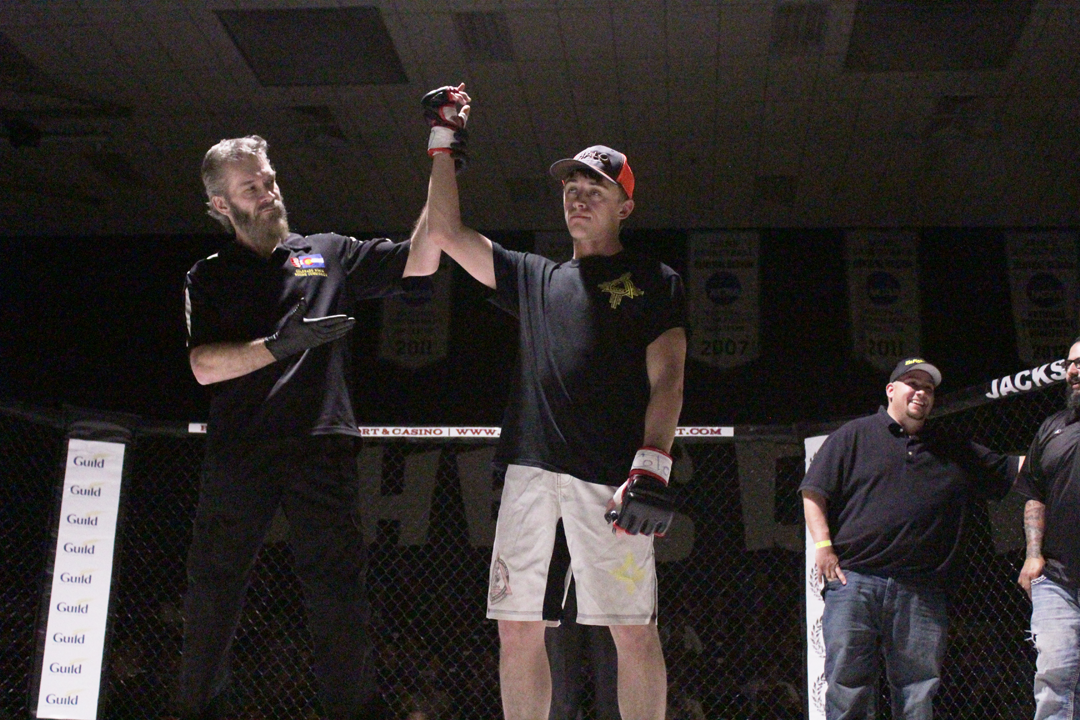 The Bantamweight fight of the night featured two relatively more experienced fighters with four fights between them. Jones winning all three of his while Quintana lost his lone outing. Quintana worked quickly and snagged Jones’ leg for a slamming takedown. Jones worked for position and began taking Quintana’s back when Quintana tapped to injury.

The slam seemed to separate his shoulder; he would be taken to have his arm reset and wore a sling for the remainder of the night. Alex Jones’ victory was officially billed as a submission victory at 51 seconds in the first round. 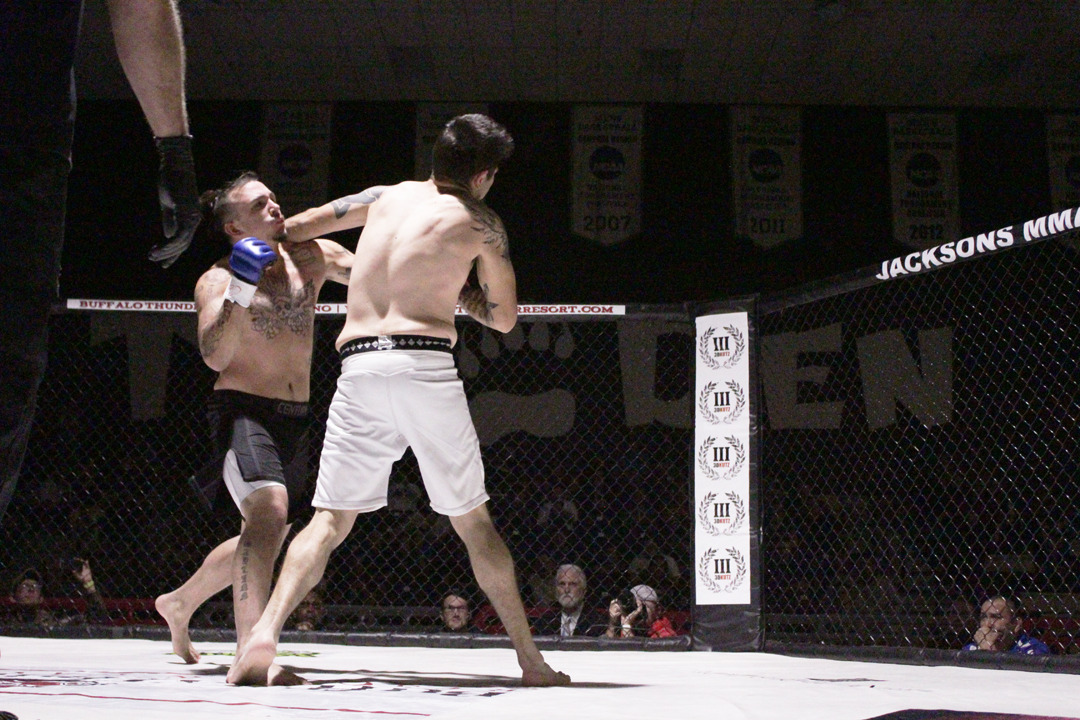 At 180 pounds the two fighters were on equal footing with regards to experience. Macomb was stepping into the cage for the first time in his amateur career while Henderson was still looking for his first win.
As the referee signaled the start of the action “He’s gonna start fast!”, was shouted from Henderson’s corner. The two traded shots in the center, Henderson took a painful hook and backed off eating flurries on his retreat. Macomb followed him back to the center of the ring where he ducked under a left cross that he countered with his own left that ended Henderson’s night. At 21 seconds in the first round Macomb got his first win in resounding fashion setting off an extended intermission with the last two fights ending in under a minute. 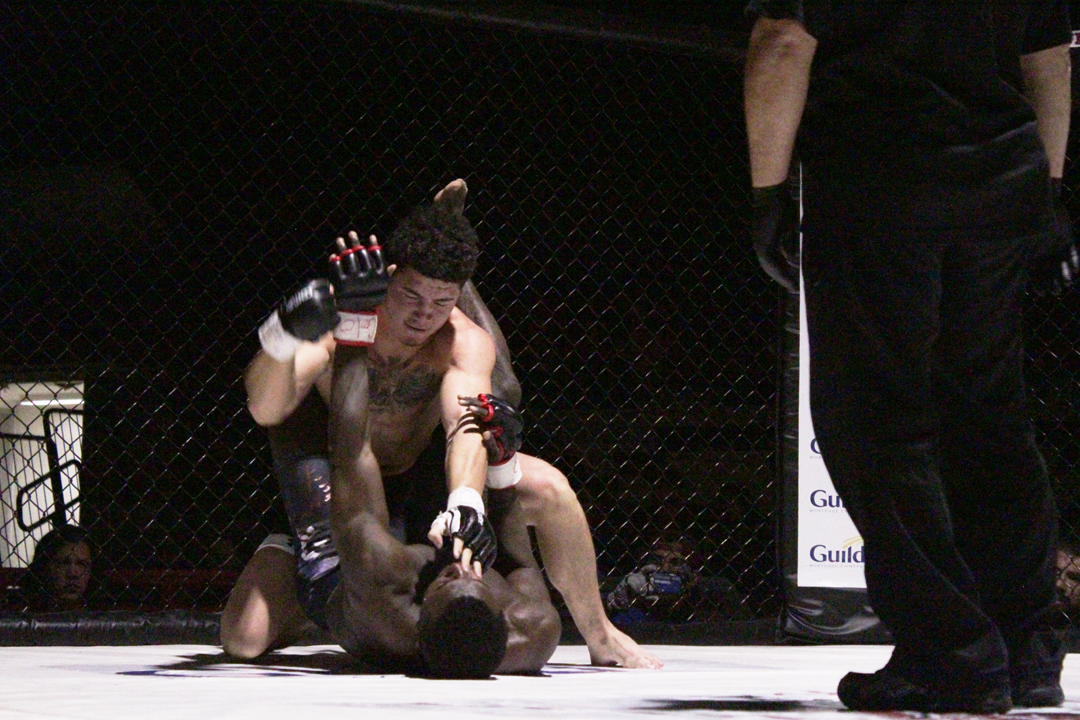 Isaac Lopez (top) works through Kemoy
Anderson's half guard for a his first victory by decision.

Lopez currently wrestles for Adams State and had an inherent following from the moment he left the locker room. Anderson had a slight advantage in experience having fought and won at the amateur level. Lopez showed off his wrestling skills right away dictating the fight from the very beginning. Lopez scored with strong ground and pound to close out the first.

In the second Lopez scored big with the judges with another take down, working from Anderson’s guard he left his right arm unattended and found himself in an armbar. “Yeah I felt it pop,” he said after the fight. Lopez refused to tap instead rolling out into Anderson’s guard.

In the third Anderson flashed some jiujutsu experience with three more submission attempts. Lopez’s consistent take downs and ground and pound were too much for the judges to ignore earning him the second judge decision of the night, to resounding applause from his team members in the crowd. 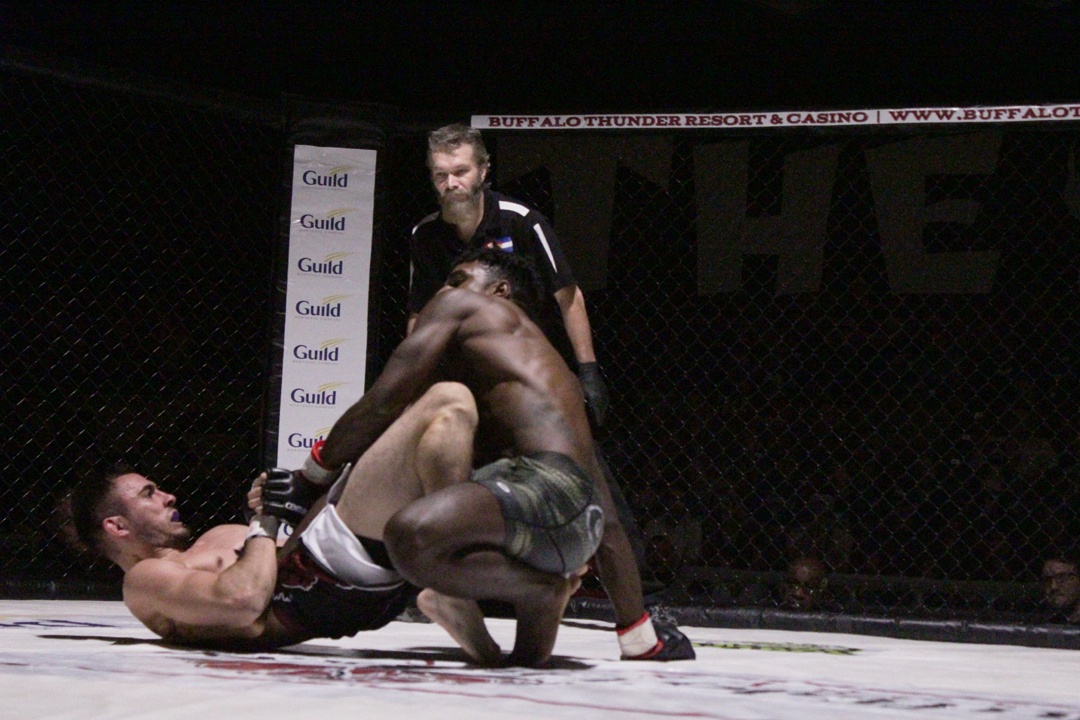 Omar Gonzalez works his way through submission attempts in his victory over Stephen Robinson. Gonzalez won by unanimous decision.

Robinson stepped in to fill the vacancy left by Mark McDill for Robinson’s first amateur fight. For the Co-Main event Gonzalez has plenty of experience having gone 4-2 in his amateur career. Gonzalez stayed busy immediately. After a take down attempt resulted with Robinson in top control, Gonzalez tucked his head in to avoid the inevitable shots.

Robinson fired off at the back of Gonzalez’ head and referee Tom Johnson was forced to stand them up to warn Robinson about punches like that. Gonzalez got another take down and began looking for submissions before settling on a leg bar attempt that closed out the first.

The second round featured a bevy of submission attempts from both fighters. Viewers saw leg bars, arm triangle chokes and even a kimora, none of which ended the fight. 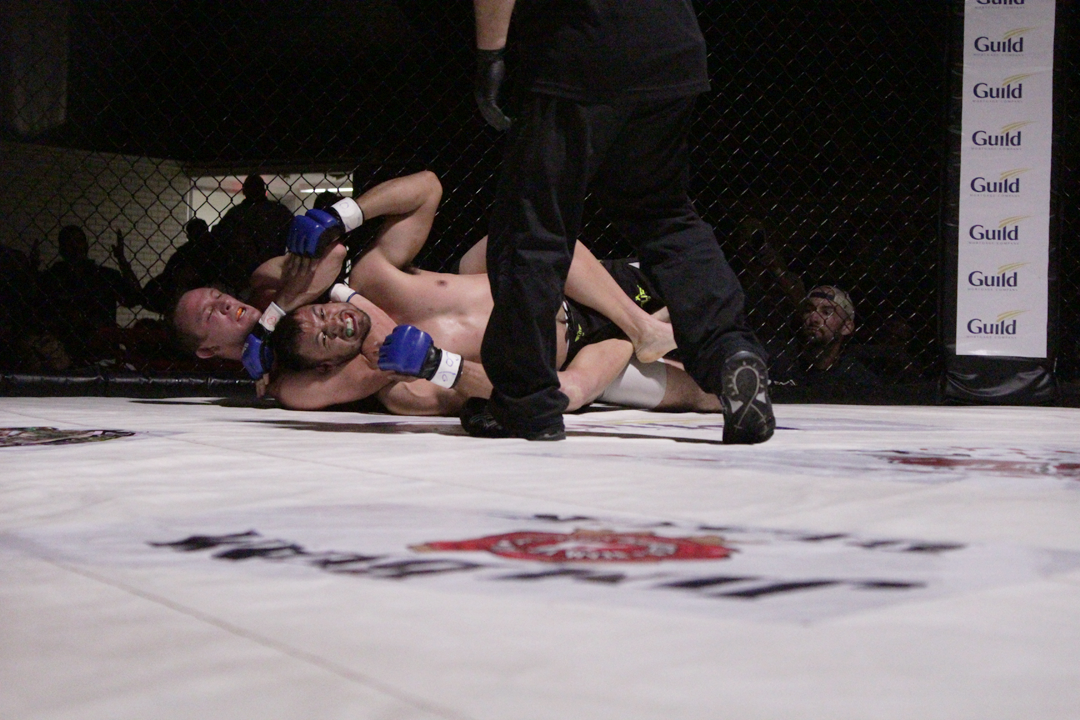 When Acosta’s corner suggested Superman punches, it was Yohn that kicked his foot back and feigned two off the cage. Later, A take down attempt from Yohn resulted in Acosta trying for a standing guillotine. His wrist came short of the neck and landed instead on Yohn’s jaw dooming the submission from the start. After Acosta burned enough energy Yohn flashed some vaunted wrestling skills with a textbook double leg take down that shook Plachy Hall ending the first round.

In the second Yohn went head first for another take down and found himself in another guillotine attempt. Acosta couldn’t find quite find Yohn’s neck again and was forced to relent to the guard. Yohn took advantage immediately and shifted to Acosta’s back to finish the fight in the second round with a rear naked choke to close the fight and the night to an audience in full throat.