Lavier puts up 12 points, Moose can’t keep up with Pirates

Alamosa senior Alana Hackett (25) scrambles to get a loose ball on defense late in Alamosa's loss to St. Mary's. The Moose could not keep pace beyond the first half.

ALAMOSA — Tuesday night Alamosa’s girl’s basketball (11-7-0) got a chance to measure themselves against some top talent from the 3A class in St. Mary’s High School of Colorado Springs. Even though they lost the game 68-34 they now have an idea of what kind of talent lurks beyond the Intermountain League (IML) if they can make it past the district tournaments.

Alamosa’s schedule has not been forgiving for the month of February. They had to face the top two teams in the IML in Pagosa Springs and Centauri, whose records are a combined 33-4. On Tuesday they faced a then 17-0 St. Mary’s team, who according to their CHSAA RPI score are the number one 3A team in Colorado.

Having a ranked team like that in town was a point of interest as Centauri and Antonito's squads turned out to see what all the fuss was about.

Alamosa started the first quarter using their possessions on three point attempts. However after an early hit from Sylvie Caton, the Moose fell silent. The Pirates went on an unanswered 12-point run to open a 14-7 lead after the first quarter. 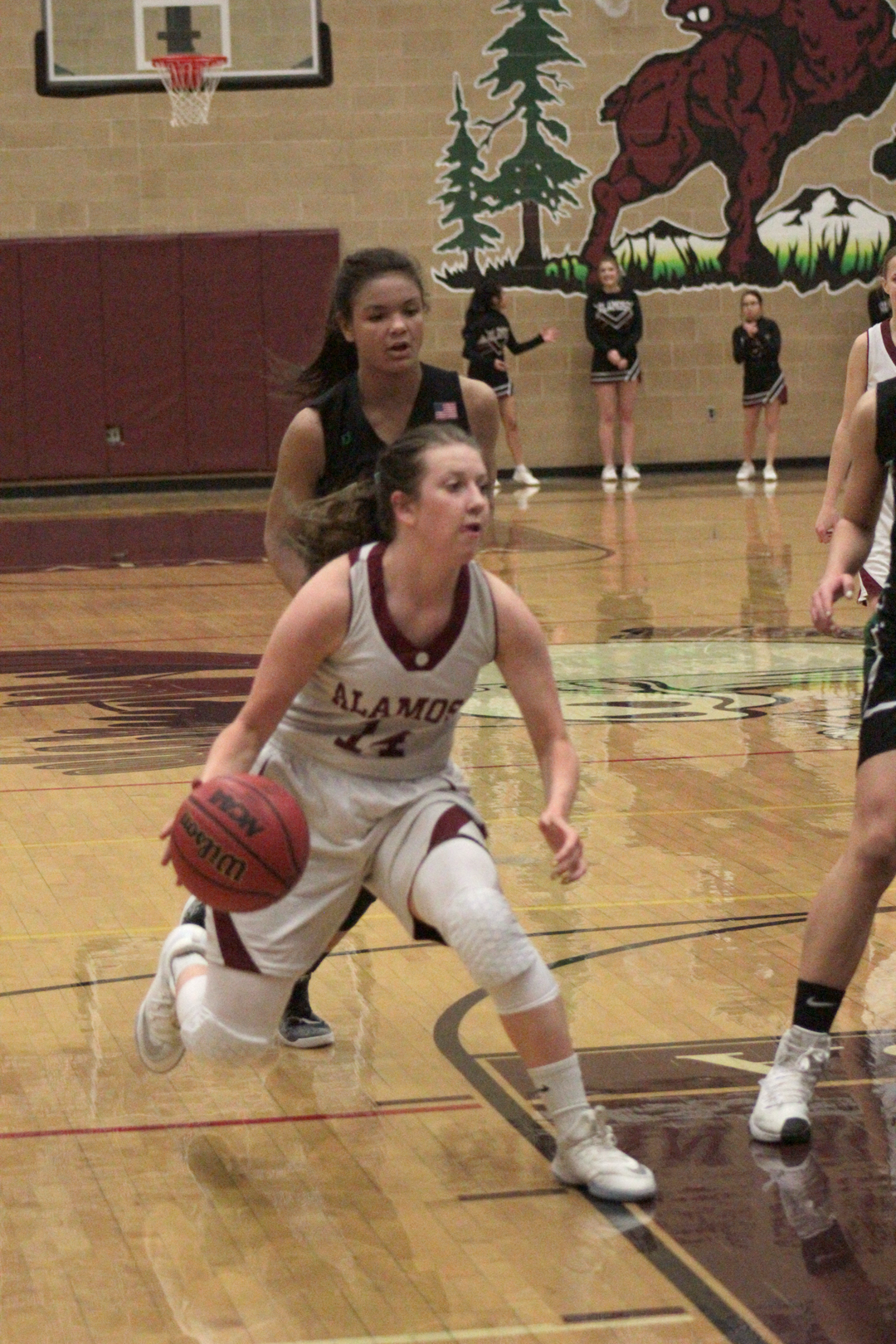 Kathleen Parkins rushes inside on the St. Mary's defense. Parkins finished Tuesday with eight points, but her presence was felt off the stat book as she was in on a lot of key plays for the Moose.

Senior Kathleen Parkins would lead the charge in the second quarter for Alamosa with six points. Parkins second set of made free throws in the quarter got Alamosa within four. St. Mary’s would score once more to go to the break with a 25-19 advantage.

Whatever head coach Mike Burkett said to the St. Mary’s squad in the locker room must have been very inspirational. St. Mary’s had an offensive explosion in the third quarter. It started with a nine point run before Parkins would stop the bleeding with two interior points. After all was said and done Parkins was second on the team in scoring with 8 points.

Alamosa just could not keep pace and wound up washed away in St. Mary’s 24 point third quarter. Adding two more points in the fourth quarter Lily Lavier totaled 12 points on the game to lead Alamosa. With the game out of hand both second teams would play the final minutes. On the defensive side of the court Alamosa allowed St. Mary’s their average 62.2 points per game. 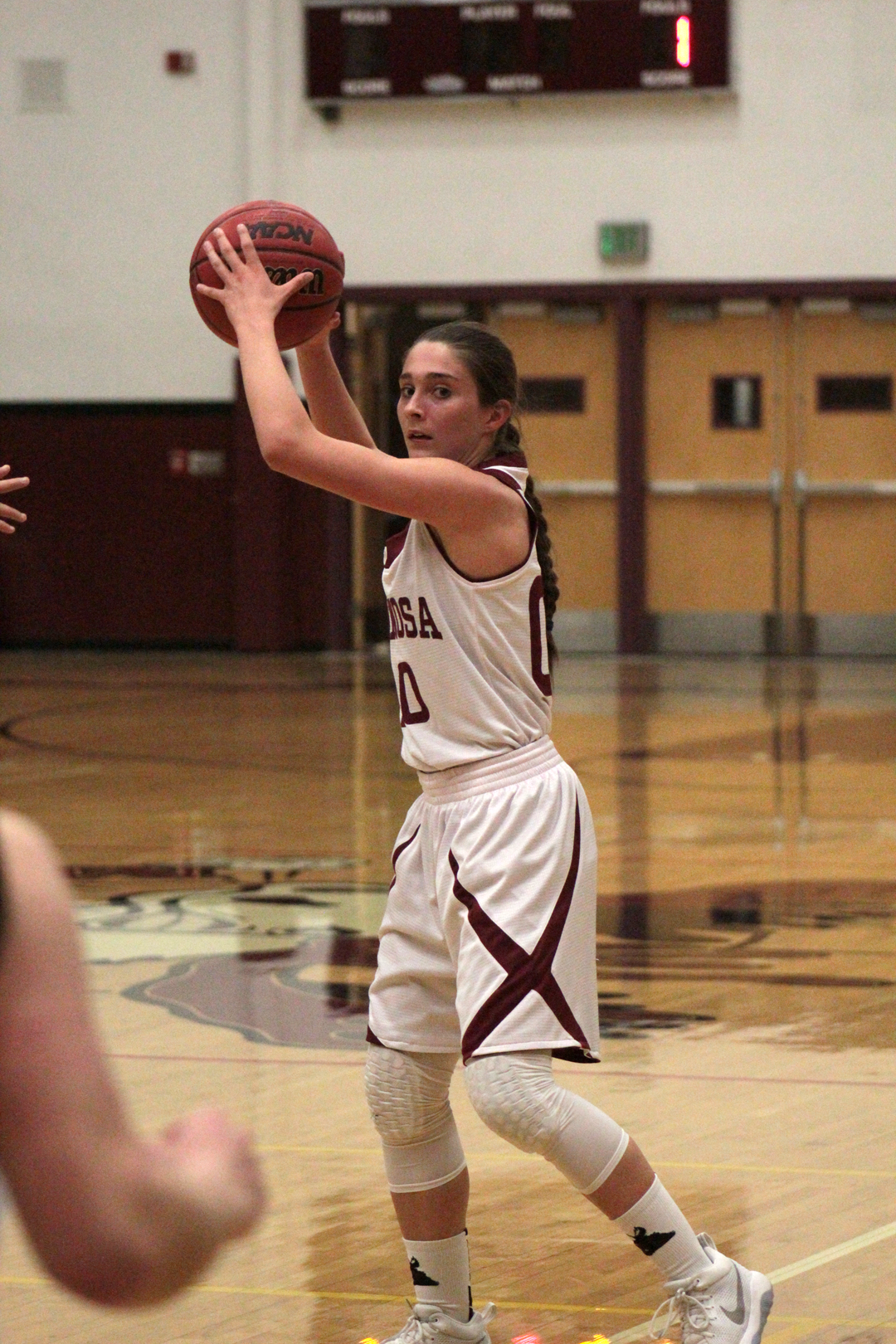 Lily Lavier checks out of the corner of her eye for some open space on the perimeter. Lavier  led Alamosa in scoring with 12 points.

Alamosa will receive some respite, as the Bayfield Wolverines will be coming to town for a game on Thursday Feb. 15 with tip-off slated for 5:30 p.m. Bayfield sports a 6-12 record and the last time Alamosa faced the Wolverines it was a 41-38 affair in which Lavier posted 14 points.