MOFFAT — The cafeteria in Moffat School was covered with farmer stories, a map showing the distance different foods traveled to reach the school and quinoa plants amidst balloons and streamers last Wednesday as surprised students filed in for lunch. Moffat’s first Harvest of the Month event was being held in recognition of the school’s effort to offer locally produced foods.

Charity Gallegos, food service director and assistant business manager, led the effort to bring in San Luis Valley produce. “Moffat School is very excited about our participation in the Farm to School Program. We feel very fortunate to engage in this program with the help of our local farmers. The farmers are such an important and vital part of our local community and economy, and this gives the students a chance to experience the food and learn about local farms.”

The local foods samples consisted of a quinoa stuffing, sourced from White Mountain Farm (Mosca), as well as a stuffed portobello mushroom and Havarti cheese dish. The mushrooms came from the Colorado Mushroom Farm (Alamosa) and the cheese from Laz Ewe 2 Bar Goat Dairy (west of Del Norte).

Both samples were expertly prepared by Roberta Rosa-Schneider, Moffat’s special education aide and point of sale for the cafeteria, and Jodi Anderson, the school’s business manager. Gallegos and members of the SLV Farm to School Task force handed out the samples.

Though some students had never tried quinoa, others said that their parents prepare it frequently at home. Elementary students tended to be averse to the mushroom dish; however high schoolers were more inclined to try it - some grabbing multiple samples throughout the lunch period. Moffat senior Ryker Poor had this to say: “This Farm to School event has introduced students to food they have never tried. At first they did not want to try it, and I told them to just take a taste. They liked it after they tried it, and that was awesome. It is all grown locally too, and that is so good.”

At the end of the lunch period, students were able to vote with marbles on how they felt about the samples, from “I loved it!” to “I don’t know… but I’ll try it again!” The “I loved it!” jar received the most votes with overall as they conversed with Angela Haynie of the Integrated Nutrition Education Program.

The Farm to School movement in the San Luis Valley is gaining momentum with support from the SLV Farm to School Task Force, a partnership between the SLV Local Foods Coalition, Cooking Matters, the Integrated Nutrition Education Program (INEP), and the Valley Educational Gardens Initiative (VEGI). Funding from a USDA Farm to School grant is supporting schools’ farm-to-table efforts.

Moffat’s next farm-to-table event will be held on the first Saturday in April at the cast party following the play, and will be open to the community. Yak and bison will be donated by the Slade family ranch in Moffat. Mark calendars now for the “Yak Attack” at Moffat Schools!

Captions: When asked what he thought of the quinoa stuffing, Mikrae Knight gave a big thumbs up./Courtesy photos 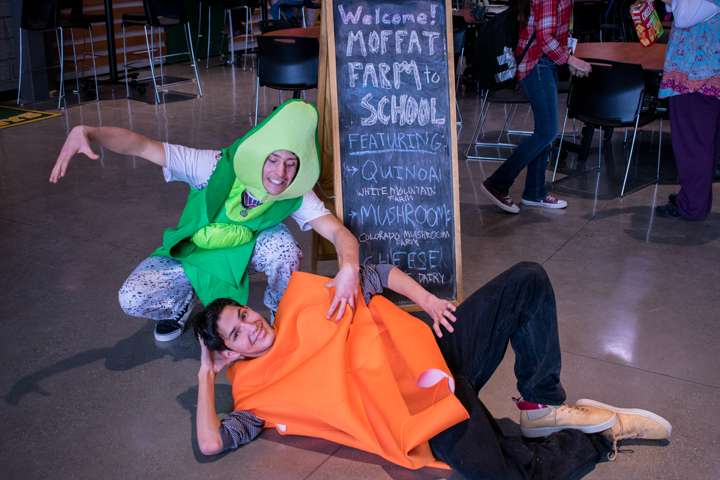 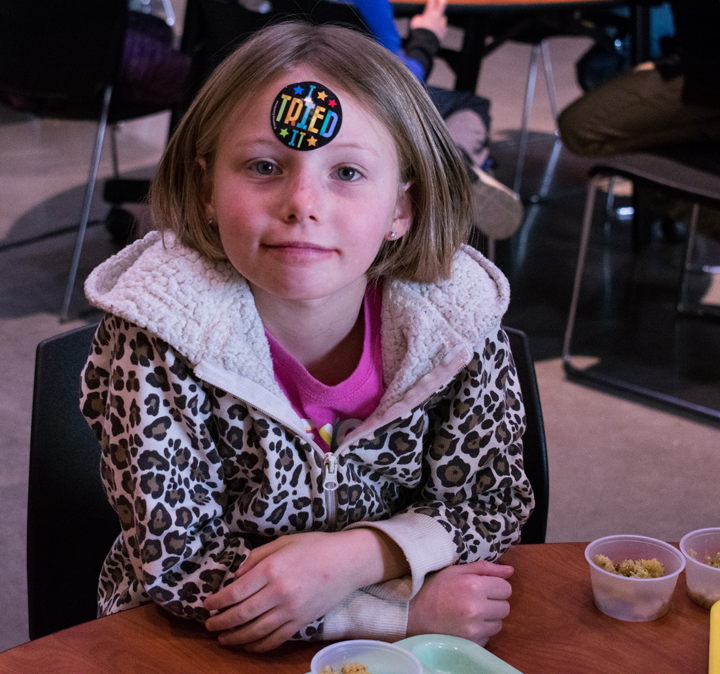 Bella Cohen proudly displays her participation in the event by placing an “I tried it!” sticker on her forehead. 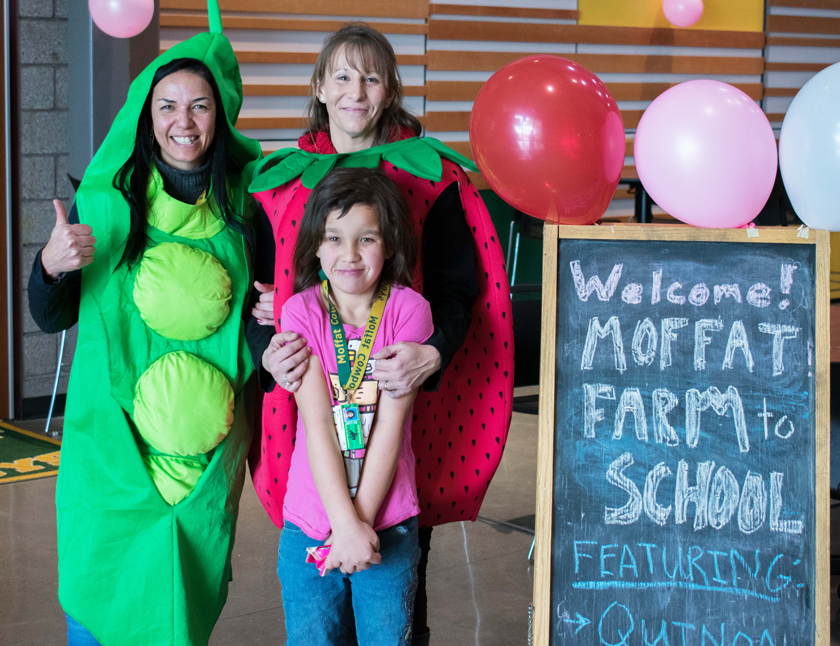 Charity Gallegos (strawberry) and Roberta Rosa (green pea) pose with Marie Velazquez before the Harvest of the Month event begins. 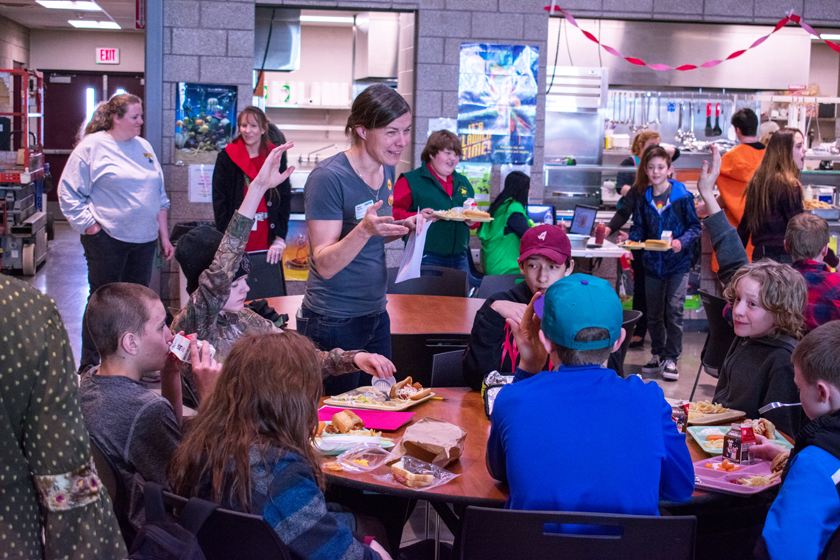 Harvest of the Month Coordinator Mandy Wilner quizzes students with questions about quinoa. 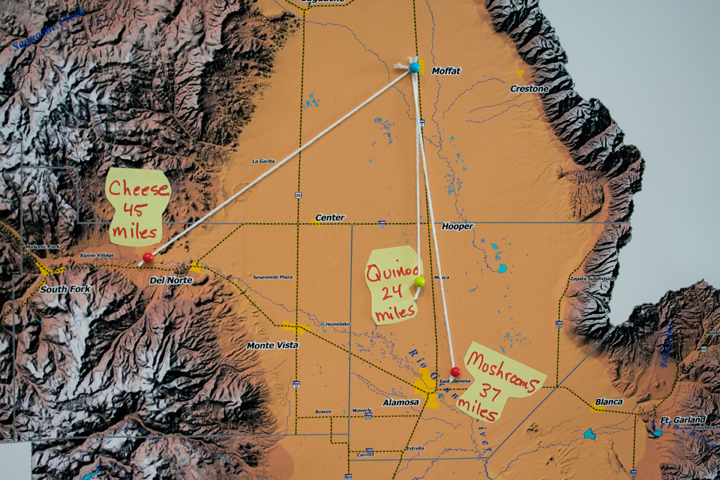 San Luis Valley map shows the distances of each Harvest of the Month sample from its respective farm.

Grazing workshop for both farmers and ranchers