ALAMOSA — Alamosa artist Geri Morrison will open a display of multimedia work in the artrium by the surgery department at the Alamosa hospital where she served as a RN for several years.

“I worked at the hospital where I’m showing for nine years,” Morrison said.

She semi retired after a knee replacement and now works four days a week at Rustic Log Furniture as an upholstery pattern designer and seamstress, a job that challenges her naturally creative mind.

The range of work she will be displaying in her art show illustrates that creativity whether it is in a refurbished piece of barbed wire or a scenic painting of the outdoors she loves so much.

“I love all of God’s creation,” Morrison said. “That tends to be the focus of my art. God’s the best Artist. We can never come close, but we try to replicate that. Through sculpture, paintings … we continue to try to replicate God’s handiwork, but He’s still the Master Artist. But it brings us joy to do it.”

Morrison began oil painting in 2008, but she has been creating other forms of art for many years. Her work includes barbed wire wall hangings, plasma cuttings (she made all of the cuttings adorning the front of the residences in her neighborhood complex), beaver pelt clippings, ink on leather, sketchings, tapestry hangings and paintings.

The beaver pelt clippings she has been doing for almost 40 years, since she lived in New Mexico and began transforming into art the pelts from beavers that wildlife officers had culled.

Turning discarded items into works of art is common in Morrison’s work, whether it is a piece of barbed wire discarded on a ranch or a willow twig lying by the river. Her inspiration and materials often come from nature, such as bird feathers to adorn her wall hangings.

She has become a popular artist, with patrons seeing her work on the internet and commissioning her to paint similar scenes for them. Scenes of what she calls aspen legs are especially popular.

“It’s therapeutic to paint,” she said.

She often paints scenes she has captured in photographs of the area.

“I paint as much outdoors as possible,” she added.

An outdoor enthusiast, she enjoys rock climbing, hiking, kayaking, repelling, fly fishing and cross country skiing, and she enjoys introducing young people to the joy of these activities as well.

Growing up in New Mexico, Morrison began coming to the San Luis Valley about 20 years ago and bought a place here 19 years ago.

Her current family consists of an adopted beagle and her beagle’s adopted cat.

Morrison’s work is scheduled to go up in the SLV Health artrium in Alamosa on October 1 and will be on display through the end of December with some of the art changed out during that time.

Caption: Painting like this one, “Reflections of September,” are popular with artist Geri Morrison’s art patrons. This is framed with wood from Rustic Log. Courier photos by Ruth Heide 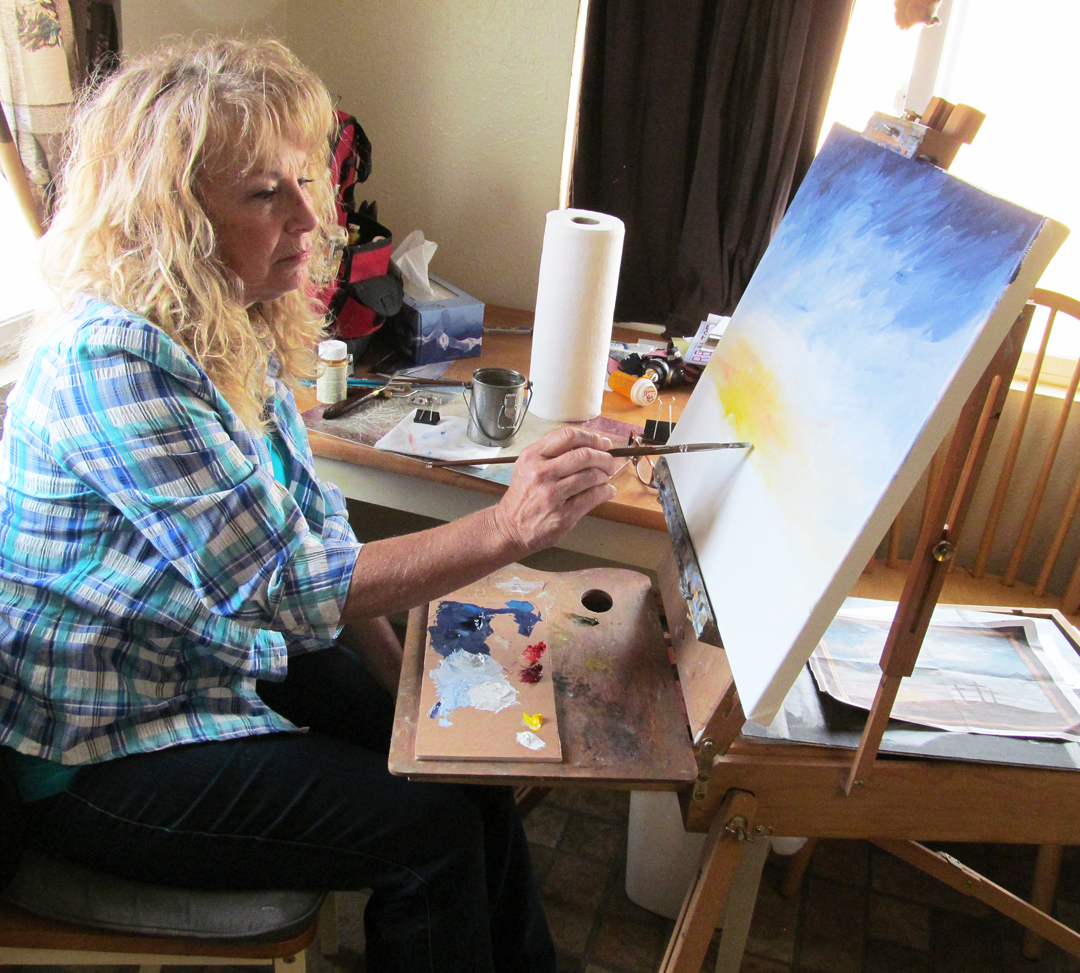 Artist Geri Morrison works on a painting for her show, which will be displayed in the artrium at the Alamosa hospital. 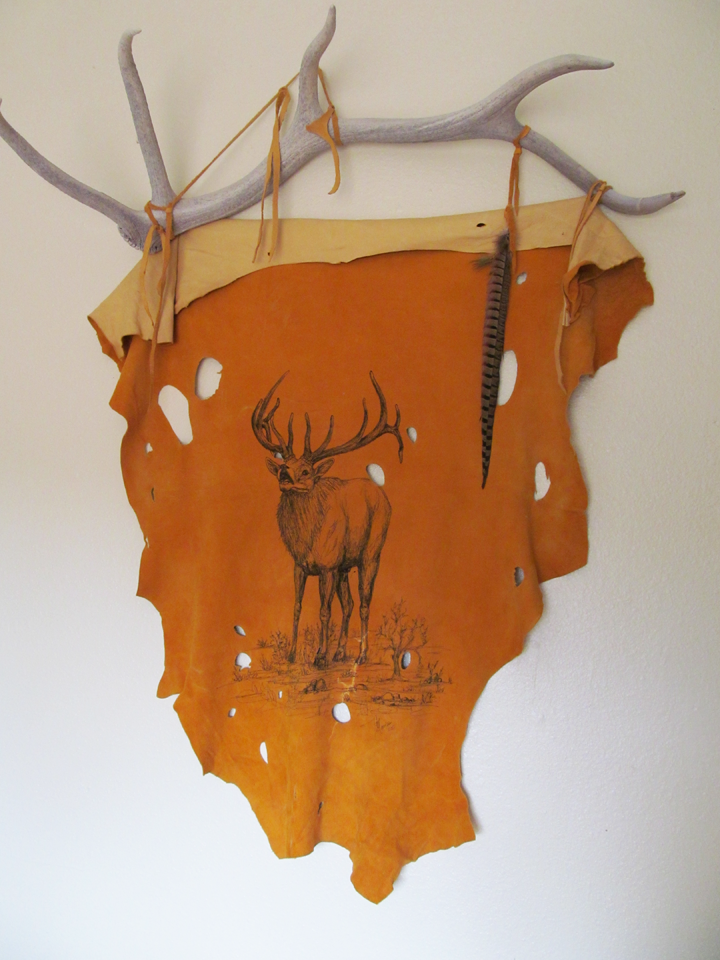 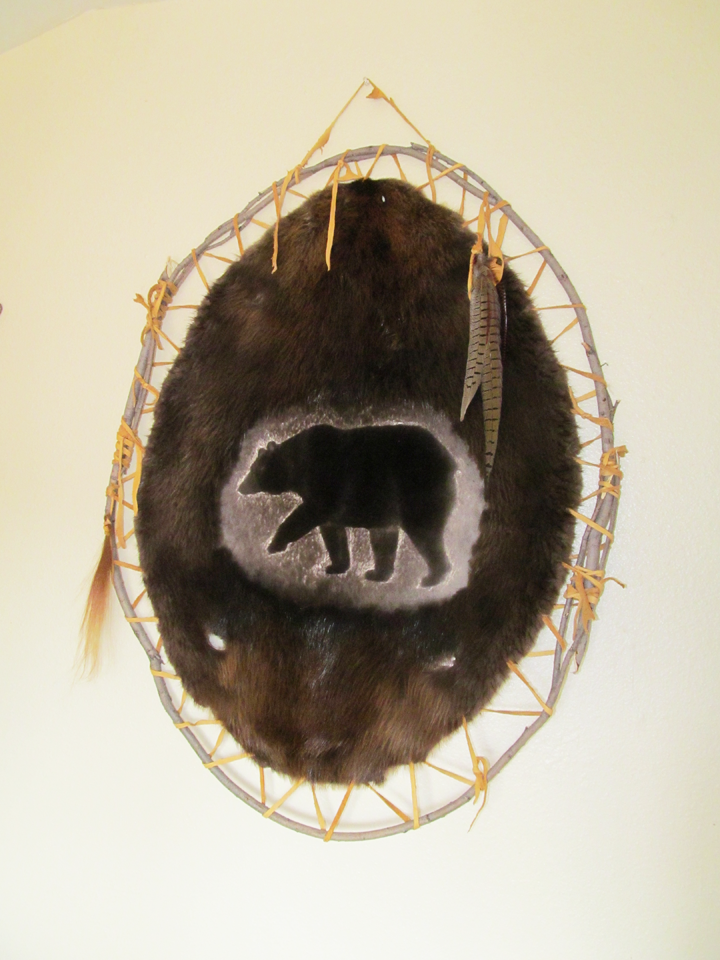 “Born in Colorado” is one of Geri Morrison’s beaver pelt clippings.