MOSCA — Continuing the tradition set by the National Park Service's 100th birthday last year, the U.S. Citizenship and Immigration Services hosted a naturalization ceremony at the Great Sand Dunes National Park and Preserve's amphitheater on Wednesday. Seventeen adults from nine different countries who reside all over Colorado became American citizens at the second ceremony to ever be held at the park.

"The last time we were here it was the middle of summer and it was quite a bit warmer," said Andrew Lambrecht, the field office director with the U.S. Citizenship and Immigration Services' Denver office, laughing. "Today we're enjoying the beautiful fall weather and dealing with some of the breeze."

After a presentation of colors by Boy Scout Troop 307 and the singing of the national anthem by Adams State University student Alonna Younger, Great Sand Dunes National Park and Preserve Superintendent Lisa Carrico welcomed attendants to the park.

"I think it is especially appropriate to be holding a naturalization ceremony here at Great Sand Dunes," Carrico said, "a place that has been a cultural crossroads over thousands of years and a place that has special, even sacred, significance to many people.

"The power and wonder of these dunes and mountains have captivated people for centuries and they continue to draw us here to explore, to learn and just to have fun. For thousands of years people have migrated through this area. Some have stayed. Others have continued onwards. All have contributed to the history and diverse cultures of the area."

Carrico added, "Today will be your very first visit here as a U.S. citizen. But we hope to see you many times in the years to come."

Though U.S. House Representative Scott Tipton could not be present for the ceremony, San Luis Valley Regional Representative Brenda Felmlee read a letter on his behalf to congratulate the citizens on the momentous occasion.

"President Dwight Eisenhower once said, 'Accomplishment will prove to be a journey, not a destination'," read Tipton's letter. "You are celebrating an amazing accomplishment today, but this ceremony is only part of your journey. After today your journey will continue and your list of accomplishments will grow.

"I wish for you the best as you continue your journey. All of you today are part of the greatest nation the world has ever known." 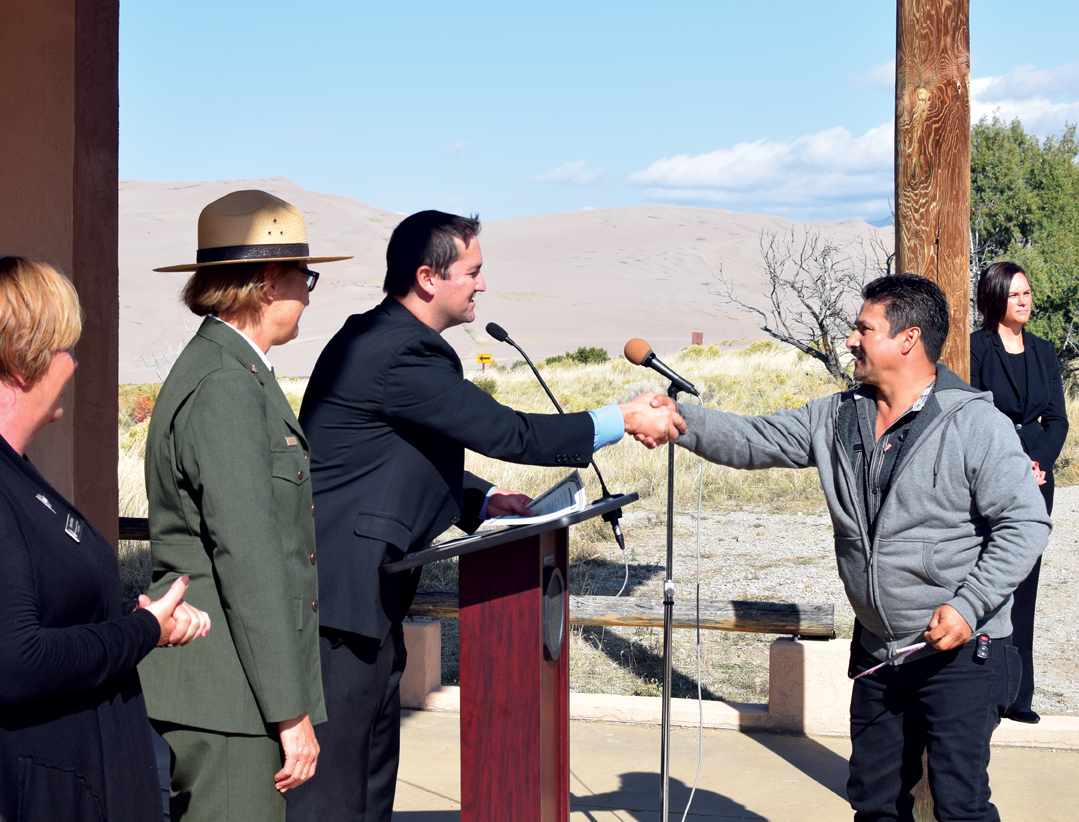 Ernesto Ochoa Monge, who has lived in Monte Vista for roughly 20 years with his wife and three children, shakes the hand of U.S. Citizenship and Immigration Services' Denver's Field Office Director Andrew Lambrecht, as he receives his citizenship certificate. "It's good," he said. "I'm happy. I'm an American citizen now."

After immigrants read the Oath of Allegiance they then joined other visitors in reciting The Pledge of Allegiance aloud as new citizens. The 17 people, along with their families and guests, were free to spend the day at the dunes and participate in guided tours after receiving their certificates of citizenship.

Lambrecht closed the ceremony by thanking those involved but also by thanking the permanent residents for choosing to become naturalized. "All of you decided that it wasn't enough to be in this country as a permanent resident," Lambrecht said. "You all decided you wanted to step forward and become a full part of what is happening in this county...I recognize that's not a small thing...No matter where you're from in the world, no matter what work you do, what country you're from, where you live, what you did in becoming an American citizen took sacrifice, dedication and effort. For doing that all of you should be celebrated."