Perspectives on road bicycling in the San Juans

By: Stan Moyer - Updated: 5 years ago

My own experience since the beginning of 2014 in this combined hobby and necessity for myself amounts to just short of 30,000 miles on five bicycles, largely on high-end road bikes ridden for the most part in or around South Fork, Del Norte, Alamosa and Alamosa County, plus communities like Antonito, Sanford. Manassa, Monte Vista, Center, Crestone, La Jara and San Luis. In this period I have paid my dues in riding experience as well in events and leisure riding in and around Tucson, Arizona, Albuquerque and Santa Fe, New Mexico, and Wichita Falls, Texas.

One of the most positive discoveries of my own has been the high altitude of the SLV offers excellent training requirements for both riding and race events at lower altitudes out-of-state, and opportunity to ride on largely flat, somewhat unchallenging areas near Alamosa, for example, and unforgiving climbs and downhill rides which absolutely demand paying attention to what’s being done. Try the area in or somewhere near Wolf Creek Pass on US Hwy 160 and Rio Grande County Rd 20, for example.

Residing on a temporary basis at least in South Fork will be your best ticket to doing the second set of rides described, whether in a local motel or campground, or friends or relatives’ places. It does help to have access to more than just pay-to-play places.

The Alpine Valley area east of County Road 19 north of Hwy 160 heading east from South Fork is also an interesting area for rides of varying challenge levels, and CR 15 headed east from Colorado State Route 149 past the Rio Grande Golf Club will give one about a 3-mile sightseeing area with short-distance paved loops off the primary road, such as the steep-to-reach LaLomita Circle residential area. A rider can take the time to stop and admire the mountain views, or hustle through the loop keeping a close eye on what is ahead in the next few hundred feet.

While not a gravel bicycle or much of an accomplished cross-cycle rider (although I owned and have ridden the second type), the stretch of CR15 does offer an opportunity to use these, because three-quarters of a mile of the road as one travels east before reaching the short piece of CR19 which connects with Hwy 160 near the Ute Lodge is dirt and gravel, alongside a gorgeous view of the Rio Grande River.

Further use of a gravel bicycle, or a mountain bicycle more oriented towards potentially rough gravel and dirt roads is also present on CR15 about three miles east of the CR19 - CR15 intersection where the paved road once again turns into dirt and gravel.

Kristi Mountain Sports, founded in 1969 in Alamosa, now has a shop at 680 Grand Avenue in Del Norte, which is helpful for either a traveler or resident who doesn’t spend a good part of time and effort to carry or own necessary tools, or like me, doesn’t really have a lot of mechanical skill. The shop is at 680 Grand Ave., Hwy 160, or the main east-west way through town, on the north side, practically within sight of the town’s stoplight.

Another shop in the San Luis Valley, Alamosa Cycles, across from the U.S. Post Office in Alamosa, is the second oldest bicycle shop in Colorado, founded in 1949. It is run by machinist and Trinidad State College instructor Gary Teckenbrock, son of the original owners. He is very modest about his skills and connections with road bicyclists, but he’s assembled bicycles of all types for years and owns patents on some bicycle parts. Besides conventional two-wheelers, his shop has designed and assembled recumbents. Those are the general sit-down ride cycles that usually have two wheels in back and one upfront. They are used by many riders who cannot or prefer not to ride two-wheelers requiring a bent-over riding position -- many times because of back health issues.

From a veteran SLV rider’s point of view, there are many interesting spots to ride all over the area, but my own experience focuses on riding in the South Fork and Del Norte area on road bicycles. There is also an extensive set of mountain bicycle oriented trails developed over the last several years with cooperation of several federal, state and local agencies, including a large number of volunteers.

Pictured above, mechanic Kelsey Horton works on a mountain bike wheel at the Kristi’s Del Norte shop. Relatively new to the job, she is very committed to learning more skills and very carefully checking her work as she goes. She primarily works on mountain bikes at this point, but is interested in the training program at bicycle mechanics’ facility Barnett Institute in Colorado Springs. She said that step would expand her access to road bike work. 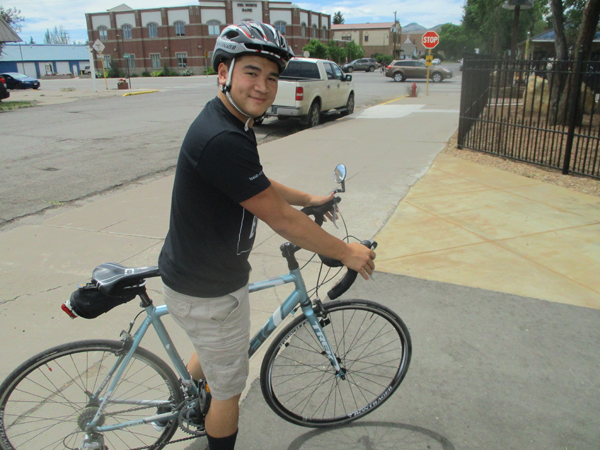 Eamonn Zollars, an employee at the Kristi’s Del Norte shop, smiles as he prepares to ride a Trek road bike in the parking lots and on the adjacent Spruce St. intersecting with U.S. Hwy 160 (Grande Ave.) next to the store. 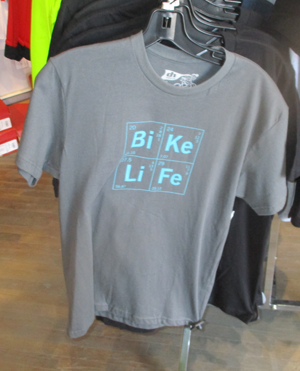 This “Bicycling for Life” T-shirt offered at the Del Norte Kristi’s shop endorses an enthusiasm for the hobby and points out another benefit of bicycling: it’s good for health.