MONTE VISTA — A year after predicting how the new Trump Administration might affect agriculture, National Potato Council Executive Vice President John Keeling was back to give an update on politics and agriculture during the first day of the 2018 Southern Rocky Mountain Agricultural Conference and Trade Fair on Tuesday in Monte Vista.

Keeling said he had anticipated that President Donald Trump might act differently once he was in office, but he said on Tuesday, “I haven’t seen anything different. He is who he is.”

The president is still tweeting, and Keeling said future presidents will probably use that form of social communication as well. “He has changed the presidency in that fashion, and it will not go back to the way it was.”

Keeling pointed out some positive developments and continuing challenges in the political world, with the most frustrating to him being congress’ lack of “ability to get things done.”

He said, “the level of partisanship is zero and the level of acrimony between the parties is the highest that I have ever seen before. That’s OK in some ways, but it doesn’t lend to getting things done very readily.” 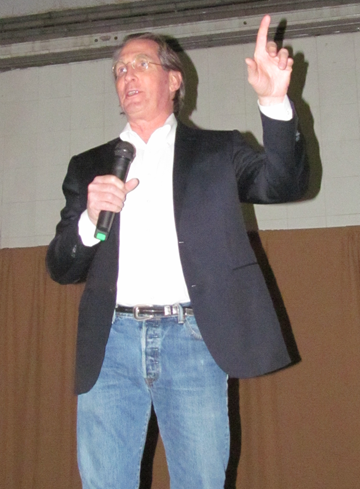 National Potato Council Executive Vice President John Keeling is one of the first speakers at the 2018 Southern Rocky Mountain Agricultural Conference and Trade Fair on Tuesday in Monte Vista.

For example, he said although congress passed the tax bill, it did so in too much of a hurry and did not think it through thoroughly or give it the attention to detail it required, which resulted in some problems that will have to be remedied.

At last year’s conference Keeling anticipated that the Trump Administration would enact regulatory reform, as that was one of Trump’s goals.

“The Trump Administration has brought a new attitude towards regulation,” Keeling said.

He said changes in policy and executive orders regarding regulations and agencies such as the Environmental Protection Agency are already making a difference, and he viewed these as “very positive for this administration.”

The subject of trade, on the other hand, is “very confusing and uncertain,” Keeling said. Talks are ongoing to renegotiate NAFTA (North American Free Trade Agreement), Keeling said, but the atmosphere around the renegotiations is “difficult or confusing at best” because other countries are not sure whether the U.S. will pull out of the agreement if the U.S. doesn’t get everything it wants, especially in light of the U.S. withdrawing from the TPP (Trans-Pacific Partnership.)

“That’s 10-11 other countries we would have had negotiations/agreements with. Probably those 11 countries are continuing to negotiate among themselves,” Keeling said. 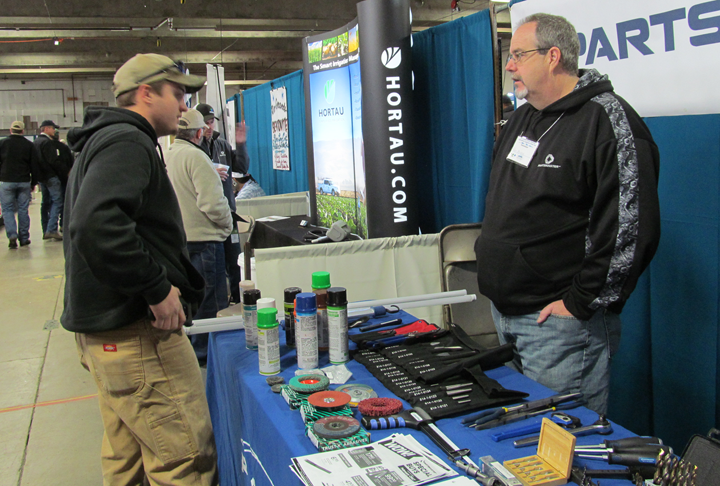 Pat Byron with Parts Master shares information at his booth at the ag conference and trade fair. The conference continues today and Thursday at Ski Hi Park in Monte Vista.

“Potato exports are 20 percent of what we produce every year,” Keeling said. That is mostly frozen or processed, not fresh, but that is a big number for the potato industry. If Japan, for example, charges 8 percent tariff on imported U.S. fries, but Europe, Australia and Canada have 0 tariff because of their negotiated agreements, the U.S. potato industry cannot compete, Keeling explained.

He said in the past there was always a solid pro-trade contingency in Congress.

“We don’t have that anymore.” It is not just one party or another, he added, but “the whole environment around trade is very, very negative in the Congress, in the public, in the whole country. We have never had that like that in recent times … Getting anything passed in trade is very difficult. We are hoping that will get sorted out.”

Regarding immigration reform, Keeling said, “We need a comprehensive reform, need border security, need guest worker workforce that can work in agriculture, come to this country, work and go home and some way to keep people working in agriculture who might not be completely documented.”

He added many people do not want to become citizens of this country but want to be able to work here and go home.

He said, “If the president and congress can do this right, there’s a chance to get comprehensive reform.”

He added it is hard to imagine congress will take the steps necessary to solve immigration problems, “but we are working hard to make that happen.”

Another challenge for the agricultural industry (and others) is transportation, specifically finding enough truckers still willing to do the job, Keeling said. Regulations regarding hours of service have been in place already, and Keeling said all that electronic logging does is “make everybody honest,” so electronic logging devices are not the only thing taking trucks off the road. The bigger picture, Keeling said, is that trucking is a difficult job with not that much economic benefit and a lot of time away from home, so with the economy improving in other sectors, truckers can find better jobs elsewhere.

Keeling also talked about the progress of expanding potato exports in Mexico. He said in the last 10 days he met with three undersecretaries with U.S.D.A. who are continuing to push Mexico to take the steps they need to open the market back up again. U.S. Secretary of Agriculture Sonny Perdue has met with his counterpart in Mexico a number of times, Keeling said, and the number one issue they have discussed is potatoes to Mexico. He is hoping that issue can be resolved.

“Hopefully we will see some movement in the short term,” Keeling said. 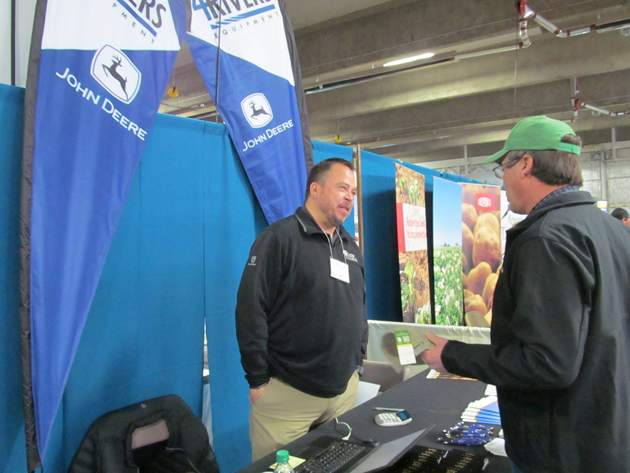 Chad Parker of 4 Rivers Equipment visits with attendees during the 2018 Southern Rocky Mountain Agricultural Conference and Trade Fair on Tuesday in Monte Vista. The conference drew a good crowd that didn’t mind the welcome snow that fell Tuesday morning.

Presentations at the agricultural conference at Ski Hi Park on Tuesday focused primarily on potatoes, with separate sessions at Vali 3 Theater on cattle issues. Wednesday’s sessions will include additional sessions on potato issues as well as soil health, weed control in grains, hemp updates and entertainment from magician Joshua Lozoff. The conference concludes Thursday with water-related presentations.

Some of the potato-related presenters on Tuesday in addition to Keeling were: