ALAMOSA — While Colorado and the Valley as a whole have abundant access to outdoor recreation, Alamosa proper lacks immediate local resources to promote wellness. To address the issue San Luis Valley Great Outdoors, City of Alamosa Parks and Recreation, the Rio Grande Farm Park and the Trust for Public Land hosted a work session on how to better utilize natural resources available

“Your voice matters,” RGFP Director Julie Mordecai told attendees. “It can make a difference in your community.”

More than 30 community members filled the room and brainstormed on how to get Alamosa to be healthy, thrive economically, promote civic and cultural vitality and steward the Rio Grande to connect the population. Previous meetings on Sept. 28 and Nov. 9 allowed the group to narrow their focus to those four main points.

The work session started with analyzing data produced by the Rocky Mountain Prevention Research Center and the Trust for Public Land.

“It really begins with data,” said Civic Canopy Founder Bill Fulton, the facilitator of the discussion. “Until we get on the same page about what’s really going on, we might have very different stories about what the realities are and what’s causing them.”

The research showed that the county’s employment rate is similar to that of the rest of the state but income is stagnant. Additionally, a rising obesity rate is caused by a lack of access to safe sidewalks, healthy food and education.

The Rio Grande is itself healthy, but there is a struggle to manage noxious weeds nearby. In the past two years roughly 8,000 people have used the river due to Weekends on the Rio and Sundays at Six. 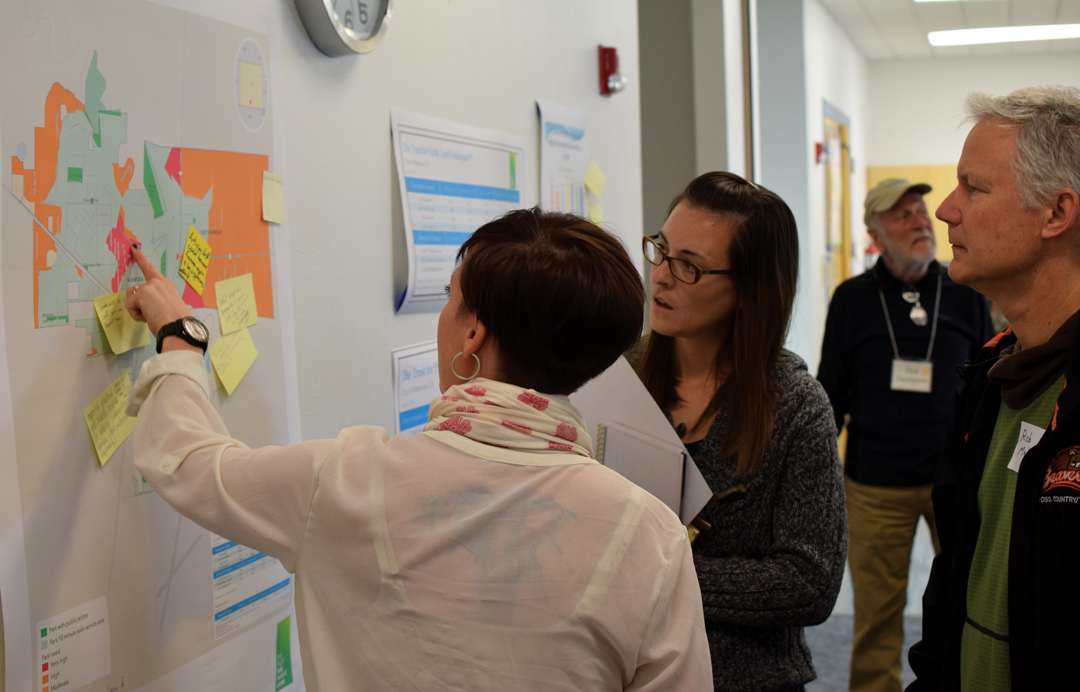 Shannon Griffin points to a map illustrating distances to parks in Alamosa with Christi Bode and Rob Mabry during a Rio Grande revitalization work session at the Alamosa Family Recreation Center on Wednesday.

It was determined that the root causes highlighted by the data are all intertwined. For instance economic distress makes people less involved in their community because they’re too busy working multiple jobs. Working a physically strenuous job doesn’t lead to wanting to participate in outdoor recreation in someone’s free time.

The geographically isolated Valley meant that Alamosa formed around the railroad and eventually U.S. Highway 160. As economic development prioritizes real estate near transportation infrastructure, a divide is created leading to certain parts of Alamosa having more resources than others.

Though some problems like the layout of the highway are beyond the group’s control, they then collaborated on manageable solutions.

The first idea mentioned was to implement better signage around trails and other recreation areas.

“People need to know where they’re at when they’re recreating,” said SLVGO Director Mick Daniel. “It’s more than just mileage. Walking times to location are pretty critical and we think there’s opportunity to educate about the history and culture of the Rio.”

Daniel said that SLVGO has already received some funding for the project from Great Outdoors Colorado’s Inspire Initiative.

To make the river more entertaining, discussion with the water community was mentioned so that the water flow can be increased. The formation of a river watch group was also brought up. Another solution is to draft a formal recreation plan that ties all of the events together and promote local foods for a healthy lifestyle. To aid the economy there could be career fairs for the general public, free life skill courses like budgeting and more apprenticeships that lead to jobs.

The next and final community meeting is March 5 at 8:30 a.m. at the Alamosa Family Recreation Center. Then action teams will be formed to execute the drafted plan.

Caption: Patrick Ortiz, Randy Wright and Dan Vaughn discuss how to boost the economy among their table during a Rio Grande revitalization work session at the Alamosa Family Recreation Center on Wednesday.