ALAMOSA — A proposed RV resort on a portion of the Alamosa Ranch drew numerous comments during Wednesday’s city council meeting.

The resort was not on the agenda, but during the public comment portion of the Alamosa council meeting several residents shared concerns over the location of the resort on the city ranch.

Councilman Charles Griego said at this point this was just a proposal the council had heard during a work session a couple of weeks ago. Developers told city officials they were interested in purchasing about 35 acres of city ranch property to combine with about 30 acres of private property to host a 500-site membership RV resort, Rio Bravo.

“There’s a long process. This has to be as transparent as possible,” Griego said. He said the public would have an opportunity to voice opinions.

City Attorney Erich Schwiesow said the developers would be holding a public meeting in the near future, and that date will be posted on the city’s web site.

Schweisow said the city has put out a request for proposals (RFP) to see if anyone else is interested in the 35 acres the RV resort developers are seeking to purchase from the city. The RFP closes on February 16. Before the council acts on those, the public would have an opportunity to comment, he said.

Most of the speakers said they were not opposed to the proposal but were concerned about losing open space on the ranch property. Some suggested that the city trade land with the developer.

Some of the speakers also suggested that the city develop a plan for the ranch property so any future proposals would be viewed in light of an organized plan. The city council did approve a comprehensive ranch plan in March 2012.

Marilyn Loser, who serves on the city’s tree board, said she values open space, wildlife habitat, plants and animals but also has a degree in economics and wondered about the viability of such a huge RV park. As a reference point, she said Salida and Poncha Springs have 328 RV sites, and Alamosa already has about 172, with two other RV parks proposed in addition to the one on the ranch.

“Who is going to fill the 500 proposed sites near the golf course as well as other proposed parks?” she asked.

She and others who spoke said this proposal would bother them less if it did not involve the Alamosa Ranch, which is currently accessible to everyone.

Don Thompson added, “Like many people in Alamosa, I share a great love for our Alamosa Ranch. I have had many opportunities to enjoy the ranch and feel a strong concern about protecting the ranch.”

He said he believed the ranch would be negatively affected by the proposed RV park.

Thompson said he heard there was a possibility of exchanging ranch land for privately held land in the golf course area that would have a higher environmental value. “That might be something that would actually benefit the citizens of Alamosa,” he said. 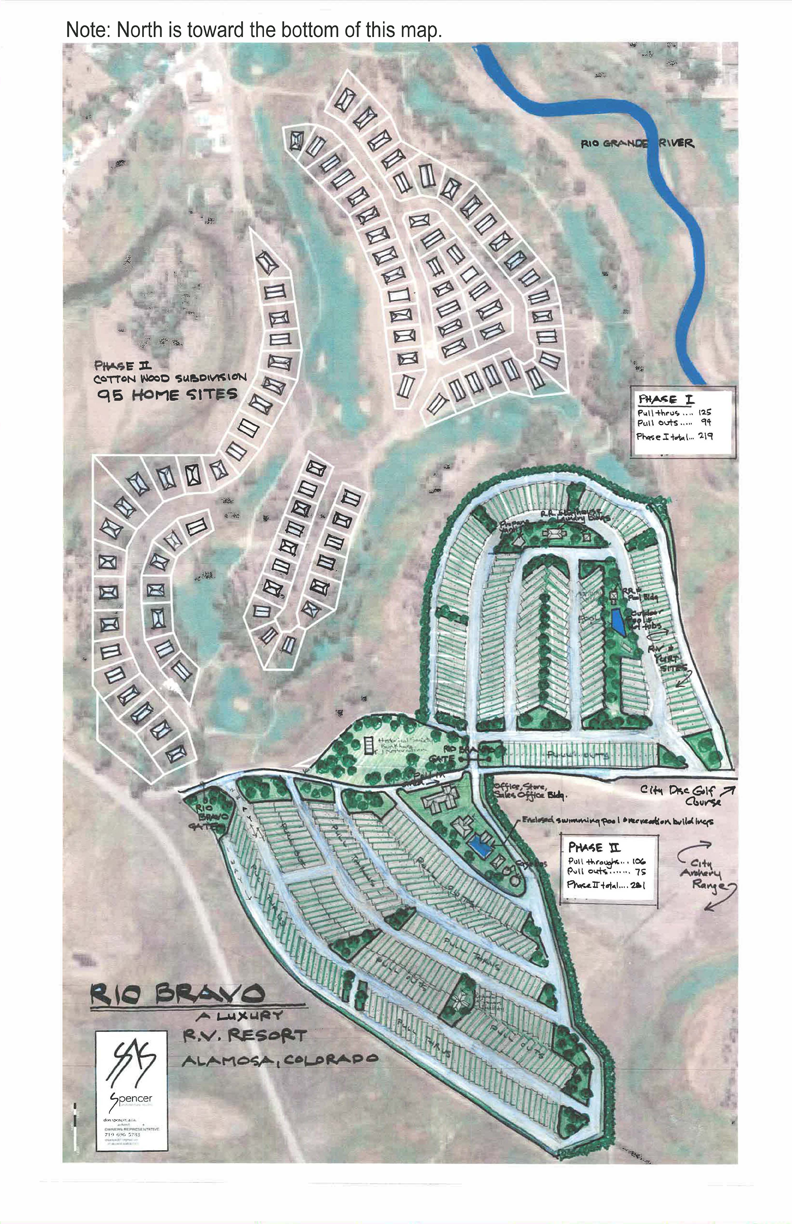 Matthew Ikle shared similar concerns. He said he was also concerned about the increased traffic from RV owners coming across the State Avenue bridge and through residential neighborhoods into the downtown area.

“How does the city propose to handle this additional traffic?” he asked. “These are not major thoroughfares. These are neighborhood streets filled with children, dogs, bicycles.”

Ikle said the number of people associated with the RV resort could equal up to 15 percent of the current population of Alamosa, “all in a space of 65 acres.”

Peter Wise, a Mennonite volunteer who recently moved to Alamosa, said his recreational activities center around the levee system and the disc golf course area. He said like many others, he does not have transportation to get into the mountains so spends free time in the area that is now proposed for the RV development.

He said he was not against an RV development in the city but believed it should be carefully thought out so it does not impact wildlife and aesthetics.

Jan Oen said she walks the trails on the ranch and enjoys bird watching. “It’s prime birding habitat,” she said.

She asked what the citizens would receive in exchange for giving up public access if the city sells 35 acres to the RV developers, as they are requesting.

She said the city needs to be proactive in developing a long-range plan for the ranch that benefits all citizens of the community. She added that she was not opposed to an RV park in or near Alamosa but was concerned about “chipping away at our public open space.”

Elizabeth Kinney also recommended developing a plan for the ranch that would identify areas for future development as well as areas that should be protected in perpetuity under something like a conservation easement “so we don’t see it chipped away piece by piece without an overall plan.”

Kinney also advocated a land swap of ranch land for areas that would enhance the ranch property.

She shared concerns about increased traffic and road maintenance.

She added, “I am not against having an RV park, but I feel our citizens should receive something in exchange for giving up some Alamosa property.”

She suggested that area residents should perhaps be given access to recreational areas and activities in the RV resort.

Elise Rudolph said when considering economic development in general, the balance sheet must be considered — “Do the benefits outweigh the detriments?”

She said both short-term and long-term issues need to be considered in relations to how they will impact the citizens and community.

She also recommended a long-term plan for the ranch.

“What is the value of open space?” she asked. “To me it is invaluable.”

Julie Mordecai said she has been working hard with other partners to develop a plan for the river corridor and believed a plan also needed to be developed for the ranch.

“We need to become less reactive and more proactive as a community,” she said.

Like other speakers, Mordecai said areas of the ranch could be identified for potential development and other areas should be protected.

Also like other speakers, she suggested that land could be traded. She said she supported economic development and believed all parties should come to the table to work something out.