ALAMOSA/HUNGARY — Two young students are currently experiencing the trip of a lifetime thanks to Rotary International. In August the peace-promoting service club sent Alamosa resident Raquel Kunugi to Hungary while Roosa Mäkelä is visiting America from Kauhajoki, Finland as part of their youth exchange program.

Though Mäkelä didn't have a choice of the state, both 16-year-old juniors managed to end up at their top pick for a foreign country, which doesn't always happen. "For most of the kids that are here Hungary wasn't even on their list," Kunugi said.

The rigorous application process required written essays explaining why they wanted to travel, a series of in-person interviews, approval and a financial commitment from the local club along with multiple host families that were willing to be screened.

Like most students, they signed up for the year abroad to see new sights and learn about new cultures.

"I love traveling and like I want to see the world," Mäkelä said. "I've been in Finland all of my life and I've been interested about the U.S. since I was little. I want to get to know other cultures and other friends around the world."

"I wanted to experience another culture and get out of my comfort zone," Kunugi said. "I wanted to go a little more east and see something different so I thought Hungary would be really cool. People really want to go to Italy and France but I wanted a very unique year.

"Hungary has just been a really great country. It's not like other European countries. It's post communism and it's still a growing country and I really love it."

Familiar activities and welcoming families have helped Kunugi and Mäkelä quickly adjust to their new communities. Because she cheered in Finland, Mäkelä joined the team at Alamosa High School and was able to make friends during practice before the year officially started. However, while the sport is similar the venue is completely different. In Finland, cheerleading is its own club that competes against others, rather than cheer on their own various school sports.

"This was my first time I've cheered for a sports team," said Mäkelä. "I freeze at the football games but it's fun because I haven't done that before. There's so much school spirit."

Hungary also lacks school-sponsored sports so Kunugi has picked up tennis at the gym with her host parents Robert Kis and Andrea Hidas. She hasn't been able to play her flute because her school, Bethlen Gábor Református Gimnázium, doesn't have band but she's keeping busy playing on her host family's piano. Kunugi has also been able to connect with Pacii, her host sister that's coincidentally the same age as her.

The exchange program is set up so that each student will stay with three separate families for roughly three to four months. This allows them to absorb more of the local culture while forming bonds with other community members and students.

In Alamosa Mäkelä is currently living with Jeff and Hallie Owsley. From there she'll stay with Lance and Rachel Cheslock then finally Melissa Freeman and Michael Mumper.

Rotary clubs themselves have also assisted their exchange students with social get-togethers. A student from Finland currently in Westcliffe and another from Brazil in Pagosa Springs joined Mäkelä and other exchange students for a weekend trip to Denver.

Because of Hódmezővásárhely's proximity to other cities—it's roughly a three-hour ride from Budapest and about 40 minutes from Szeged, the third largest city in Hungary—Kunugi has also been travelling. Her school took her to the Netherlands for a week to see Gouda, Rotterdam and Amsterdam as part of their own exchange program. Kunugi visited the country once before in the spring with her mother for her first European trip.

"It was a really great experience because I got to see a more intimate aspect of the Netherlands because I was staying with a host family and you get to know the everyday life of the people who live there," said Kunugi. 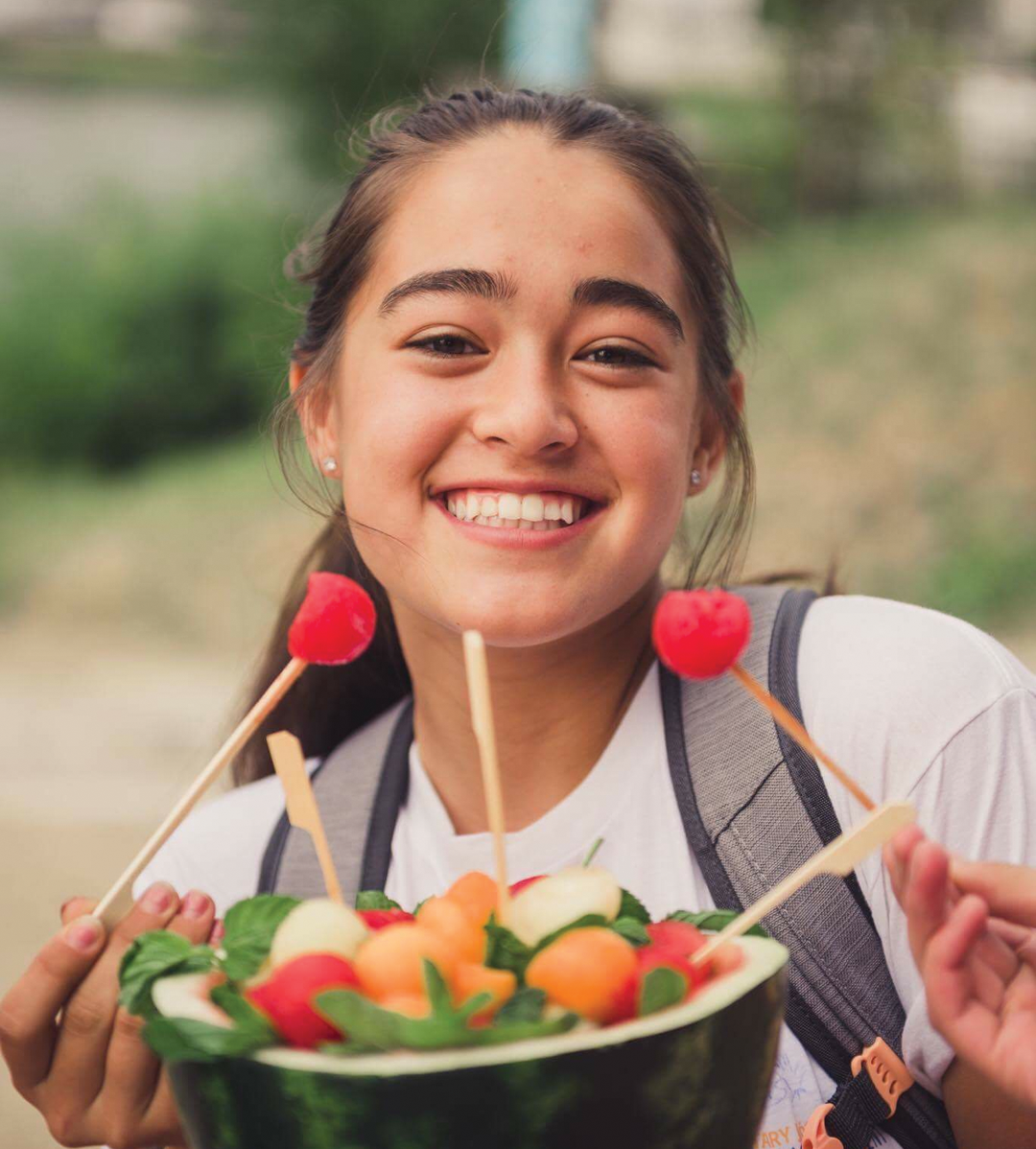 Alamosa High School Junior Raquel Kunugi enjoys a snack during the Rotary Rubber Duck Race along the Tisza river in Hungary. As an exchange student Kunugi is studying at Bethlen Gábor Református Gimnázium in Hódmezővásárhely's for a full year. Photo courtesy of Raquel Kunugi.

The weekend before she took a Rotary-sponsored trip to Vienna, Austria to see an opera, explore the city and visit other youth exchange students. Along with the three others at her school, there are roughly 40 students spread out across Hungary from all over the world.

At her school in Hungary, the day is a little different than Kunugi is used to. Instead of having a lunch break classes go nonstop, save for 10 minutes in between, and then students enjoy lunch on their own time afterwards. All of the classes except for English are taught in Hungarian, which makes things a little difficult for Kunugi since she wasn't familiar with the language before the trip. The language is one of the hardest Roman alphabet languages for native English speakers to learn.

"I'm very lucky that everybody here knows English and will speak English with me," she said.

Math is also doable, as long as word problems aren't involved, yet she has needed to adjust to the metric system. Kunugi is taking four additional classes online in order to not fall behind in her regular curriculum back home.

Though she studies with the same static group of kids throughout the day, Kunugi goes to different classes each day. Mäkelä, meanwhile, is more used to the rotating day. "We don't have the same schedule every day in Finland," she said. "It changes a lot. We don't have first hour English, second hour math, third hour biology. It changes."

The universality of English has also helped Mäkelä, who finds courses to be easier in America than in Finland. Because she has been learning the language since third grade it hasn't been terribly difficult to adjust.

"It’s kind of harder when you don't study in your first language but then I use Google Translate and it helps me a lot," Mäkelä said.

Both Mäkelä and Kunugi agree that the cultural differences are the biggest.

"People are so nice here," said Mäkelä, laughing. "I get a lot of compliments and people open doors and like say "hello" and "please." We didn't do that in Finland."

"People don't smile at strangers like they would in the U.S.," Kunugi said, "but they're very huggy and affectionate when you are good friends so that was definitely weird for me."

Coming up Kunugi will experience Hungary's version of a prom while introducing her host family, who throws weekly BBQs with their extended family, to the concept of Thanksgiving.

"I told them about it and they got really excited about it so we're going to do our own little Thanksgiving here...but I'm not sure how I'm going to cook a turkey that I've never tried to cook before."

For the Christmas season she'll put shoes out for Saint Nicholas to fill with chocolate on Dec. 6 while the whole family will celebrate with presents on Dec. 24.

Social media and the internet have kept homesickness at bay, but each student is looking forward to their family visiting them in the spring before returning home in June.

For the most part, life isn't that different. Teachers teach, students study and friendships are formed.

"I just really hope that other kids will get interested in this kind of thing. There's so many options and places you can go. If you're looking for something new to experience, I would really urge you towards it because it's so great have your own year of independence."