Rough night in the 3A quarterfinals

DENVER – Thursday night the University of Denver played host to the quarterfinal round of the 3A Colorado basketball tournament. Neither Centauri’s girls nor Alamosa’s boys would survive the night. Centauri was defeated by Colorado Springs Christian by a score of 52-37. Alamosa faced Bayfield for the fourth time this season but were unfortunately unable to come up with a third win. Bayfield defeated Alamosa 43-38.

The first of the two matchups was the Falcons versus Colorado Springs Christians’ Lions. While Colorado Springs came from a strong league, Centauri did a good job early of not allowing the size of the game to overwhelm them. A 3-pointer from Melissa Wilson and the Falcons were off and running. Centauri got going fast with a 7-0 lead and it looked like they had found a nice comfortable rhythm. However as the quarter went on, Centauri shots refused to drop. When the quarter came to a close Centauri was shooting 17 percent from the field and was trailing 13-7.

Caroline Van Berkum would fuel the Falcons in the second quarter with six points and three rebounds. But Centauri was unable to keep pace as the Lions continued adding to their advantage, taking a 30-16 lead into the break. Centauri looked sunk in the third quarter when they failed to register a field goal having to collect all six of their points off free throws. But in the fourth quarter the Falcons went on a tear closing the lead to 12 points before Colorado Christian reinforced their will. Melissa Wilson owned the scoring title for the Falcons on the night hitting two three pointers and collecting 13 points.

Alamosa’s boys had the pleasure of facing a familiar face in an unfamiliar place. The Moose would meet Bayfield for the fourth time this year. Alamosa owned the series lead entering Thursday’s contest by a tally of 2-1. Alamosa’s two came in the regular season while Bayfield’s one came in the district tournament. But as the quarterfinal matchup would prove, Bayfield seems to have a penchant for the big games.

Sporting a team-wide new ‘coppertop’ do the Alamosa Mean Moose took the court prepared for their final meeting of the season with Bayfield. The Moose got off to a slow start with a five point first quarter mostly thanks to a 3-pointer from Nicholas Brubacher. Bayfield built a 7-point advantage in the first quarter and would carry it al the way to the half.

Given the chance to sort out their bearings, Alamosa came out hot in the third quarter. In just over two minutes Ry Adams got hot from the perimeter hitting two treys and adding a deuce to give Alamosa their first lead of the game with 8 unanswered points. Adams went for 16 points on the night hitting four 3-pointers.

Just like that Alamosa and Bayfield were set up to go toe to toe for the final 14 minutes. With a minute and a half remaining in the fourth Bayfield owned a 40-38 lead. Bayfield’s Ryan Phelps would pick a pocket and draw a foul splitting his attempts from the charity stripe to make it a 3-point game. Alamosa’s attempt to tie didn’t drain and Phelps would collect a rebound and another foul this time making good on both attempts to seal the game and finalize the score.

Captions: Centauri and Colorado Springs Christian show the true meaning of the game putting good sportsmanship on full display joining arms with one another center court at the conclusion of Thursday evening’s contest./Courier photos by Stephen Jiron 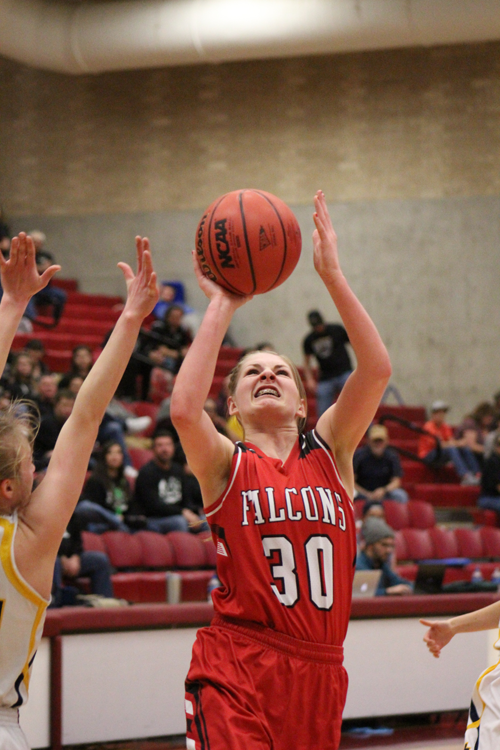 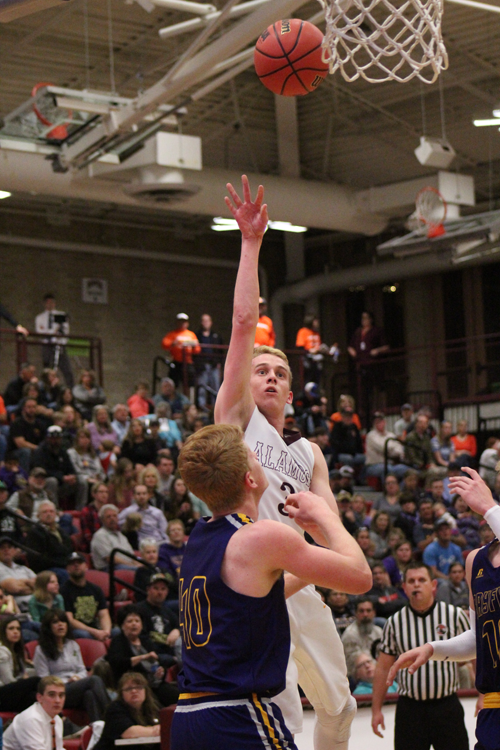 Ry Adams floats an attempt for Alamosa during the final meeting between Alamosa and the Wolverines on Thursday. Adams came alive in the second quarter single handedly giving Alamosa their first lead of the game. 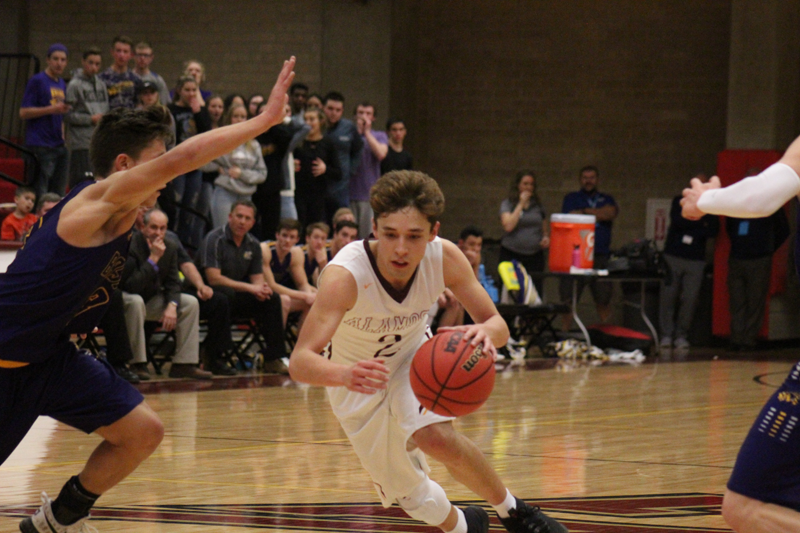