Titled "Cottonwood," the show won SeriesFest's first ever Featuring Women Initiative. Along with the read at DFF, the Denver-based television festival awarded Sellman a development deal with actress Rose McGowan and her company Damage Inc. Productions.

McGowan, best known for her role as Paige Matthews in the show "Charmed," met with SeriesFest founders Randi Kleiner and Kaily Smith Westbrook at Sundance Film Festival in 2016. She asked Kleiner and Smith Westbrook for a list of women writers to potentially hire but then the trio decided it was better to host a competition to search for top talent. After hundreds of submissions were narrowed down to 50 entries, Kleiner and Smith Westbrook then passed 20 along to McGowan, who selected Sellman and "Cottonwood" as the winner.

"Supporting women in this industry is very important to us," Kleiner in an interview before the event. "The goal here is that we really want to find stories that have a female protagonist... We were really looking for a fresh voice, something very creative and a story that we feel like hasn't been told yet. We were really trying to find an interesting point of view."

"The films that have most inspired me as a young girl and as a woman are those with strong female leads," said McGowan on the SeriesFest website. "Society is in dire need of voices that are not from within the Hollywood ecosystem."

McGowan was scheduled to attend but, given the current climate surrounding the Harvey Weinstein sexual assault allegations, cancelled all public appearances in October. Local filmmaker and executive producer of "La La Land" Jasmine McGlade filled in to direct the live read.

Featuring a cast of 16 Colorado actors who rehearsed only one day prior, the event was the first time SeriesFest held a live read at DFF instead of during their own festival like they do with their annual Storytellers Initiative.

"This is our most ambitious read we've done," said Kleiner.

The somewhat "Twin Peaks"-inspired script—loaded with San Luis Valley landmarks and references to highways, dunes, Campus Cafe and more—tells a fictionalized tale of five teenagers whose parents were in the middle of investigating the bizarre death of the Lewis' horse, Lady, in 1967. More commonly known as Snippy, her death was the first cattle mutilation reported in the country and garnered the attention of the government and conspiracy theorists. The teens each represent an aspect of the Valley's diversity: the Native American lead, her half Japanese best friend, Hispanic twins and a Mormon rancher.

"I took those threads of San Luis Valley history and sort of wove them together," Sellman said in an interview before the festival. "There are parallels with the actual people but I wanted to protect people as well." 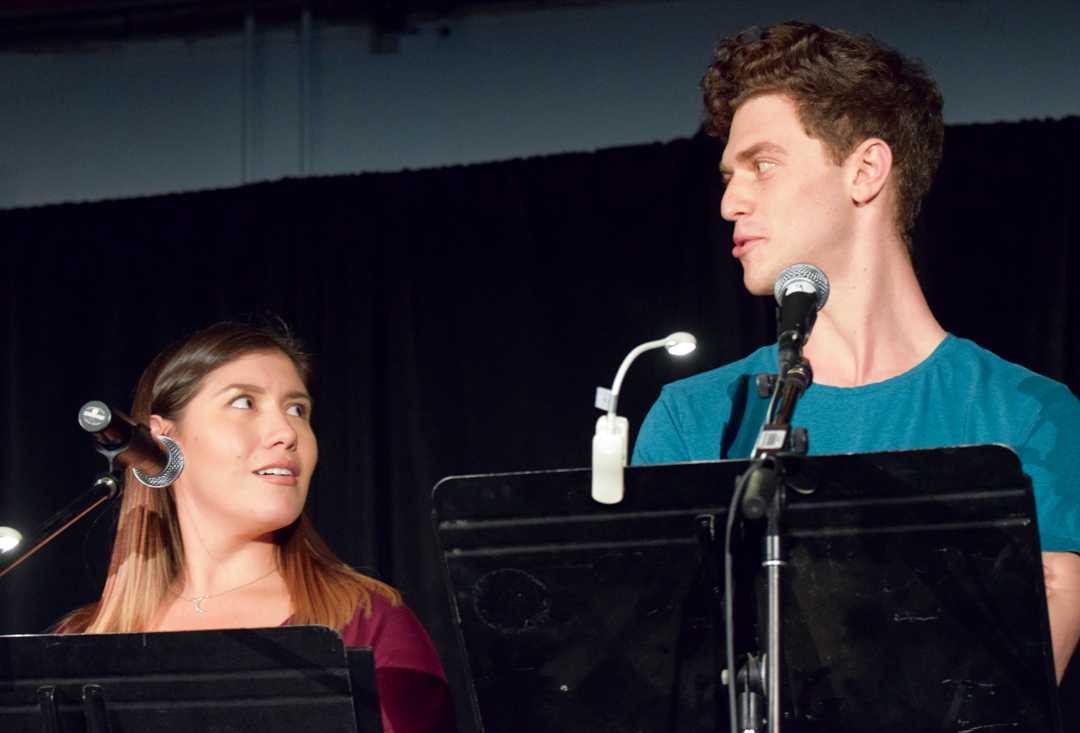 Joelle Montoya and Alec Sarche perform during the live read of Sarah Sellman's pilot "Cottonwood" at the 40th Denver Film Festival on Nov. 5. In the show, Montoya's character Anaba Keonie investigates what happened to Lady, the horse of Sarche's character Harry Lewis.

The story started as a script for a feature film when Sellman was still in college at New York University. Sellman, 28, realized that the large ensemble and complex plot made it better suited for an episodic format. She converted it into her first pilot and continued to refine it after graduating from NYU in 2011.

After the success of their documentary "American Bear," Sellman and her husband Greg Grano traveled the world in 2016. The free time allowed her to shape the script about a topic she's been interested since childhood.

"I couldn't get it out of my ahead because I'm obsessed with it. Especially when I'm living outside of Alamosa, my love of mystery and the town becomes all-consuming. It's a really special place full of fascinating mythos and history. I feel like every story I'm ever going to tell is going to somehow be connected to experiences I had there or the life of that place."

While living in Italy last October she submitted "Cottonwood" to SeriesFest. Then the waiting began.

At the end of the trip the couple moved to Los Angeles to pursue their creative dreams. She worked various short-term assistant jobs but none were as steady or as satisfying as being a fulltime writer. Though interviews for those positions went well, each voice on the other end of the phone told Sellman that her ample experience would make her bored as a writer.

"That was a thing I heard over and over and over again. 'You're not hungry enough. You don't want this desperately enough.' I don't feel that way. I feel like I have a lot to learn."

Discouraged, she began to delete portions of her resume to not appear overqualified for an entry-level job in July. However, an email notification distracted her before she could start. Upon opening it she saw that McGowan picked "Cottonwood" over the other series.

She and Grano went out that night to celebrate and the good news kept coming. At dinner she received a call saying that she was accepted into Bad Robot Productions' nine-month fellowship program. Working at J. J. Abrams' company, known for the recent films in the "Star Trek" and "Stark Wars" franchises along with shows like "Lost" and "Westworld," Sellman is currently learning the intricacies of Hollywood.

"And I never had to change my resume!"

One thing that Sellman did have to alter was a historical detail here or there. Since the show follows a narrative arc, she had to invent antagonists to create conflict. She made Agnes Lewis an alcoholic and Kenzo Kitamura abusive though their real life counterparts probably differed.

"It's not really about who is killing the cows because cows aren't humans and we aren't as invested in solving that mystery," said Sellman. "It’s more about the interpersonal drama and the ways in which opening up your world to the greater world at large can really change and shift a town. It's more about who these people are, what their lives were like and how they were transformed by this."

While creative liberties are to be expected, Sellman's biggest fear is not portraying her home community accurately. To help get the details right she interviewed as many people that experienced the aftermath of Lady's death firsthand as possible. The discussions simultaneously excited and scared her.

"No cameras were ever allowed," said Sellman during a Q&A after the live read, pictured above. "It was an audio recording and I had to promise that it was for fictional purposes. Additionally, every single person I interviewed asked if they could, in their own culture's way, protect me and put a protective charm on me in some way."

Sellman is still researching so those whishing to share their own Lady-related tales can reach her at her website. As she continues to edit her work, Sellman can't believe how her life has changed for the better.

"In the next year at some point I could be going to like Amazon, or Hulu or Netflix or HBO and saying 'This is my show, do you want to buy it?' That's huge. That's the top of the totem pole."