See the Sugar Plum Fairy dance tonight in ‘The Nutcracker’

ALAMOSA — Get your ears and eyes ready to enjoy a winter wonderland with Mountain Valley Dance Studios. Tonight, ballet performers will take to Adams State University’s SLV Federal Bank Main Stage Theater to put on their biennial presentation of “The Nutcracker.” The studio has produced Tchaikovsky’s work 11 times since 1994.

“It’s the quintessential holiday ballet production,” Mountain Valley Dance Studios Director Aubrey Lucero said. “If you think of a ballet done in the wintertime, you think of ‘The Nutcracker.’”

A veteran of the stage, she first started dancing at the studio when she was 4 and took over from founder Beverly Mozzetti in 2008. Lucero has been working hard since September to make things as smooth as possible for the 150-plus cast and crew that has dancers ranging in age from 4 to 40 and some volunteers in their 70s.

However, the show almost didn’t have their titular role.

Because there are five performances in four days, Lucero double casts parts so dancers can rest. After casting one pair of Clara and the Nutcracker Prince, she realized there wasn’t another male dancer to match with the second Clara.

Centauri High schooler Claude Peay, who plays the Snow King throughout the shows, recruited his classmate Dylan Fritz to assist. Though Fritz hasn’t danced before, the 17-year-old enjoys acting, being in the spotlight and helping his friends.

“It’s fun,” Fritz said. “It’s a really good environment and people are friendly here. They all just want to help you out to so you can get the job done and put on a good show.”

Though Fritz doesn’t think he’ll go into a dancing career after college, he’ll be at the studio from here on. Meanwhile Peay, 17, has been with the studio for a year and hopes to perform for the Montana Ballet Company while studying at Montana State University. His favorite moment of the night happens to be the time when he’s on stage at the end of the first act.

“Especially since it’s a partner dance combined with a group dance, it’s fascinating to watch it expand and grow,” Peay said. Not only will it be his first time performing “The Nutcracker,” but it will also be his first time seeing it live.

Lexi Hanna, 19, performs that scene with Peay as the Snow Queen for two of the five shows. The Minnesota native took up dancing five years ago to expand her social circle after moving to Del Norte. Now Hanna is teaching eight classes at the studio as she studies nursing at Trinidad State Junior College. Though she has been immensely busy, she hopes the audience will use the opportunity to relax.

“Ballet is like a movie,” Hanna said. “If you’re having a hard time in life, take a break with ‘The Nutcracker.’ It’s nice to see people feeding off each other’s energy.”

That movie-like choreography acts as a universal language.

Hitomi Shido, 26, moved from Hokkaido, Japan, to the San Luis Valley to be with her husband and though she is a world away from the familiar she has been able to fit right in with the dance community. Lucero’s Cecchetti method of teaching dance may be different than the Vaganova method Shido grew up with, but aside from subtle nuances the transition has been smooth.

“I like dance,” said Shido, who plays the Sugar Plum Fair and a reed flute. “It makes me happy.”

The other Sugar Plum Fairy is played by Micaela Fleming, 20, who has been learning at the studio since she was 4 and is majoring in English education at Adams State University. After 16 years of hard work this year she’ll finally have a lead role.

“It’s one of the main roles so it’s a bit more daunting and you have to put more effort into it and try harder,” Fleming said. “I’m here all the time.” The intense rehearsal regime has led to Fleming going through five pairs of pointe shoes since practice has started.

No matter if one has seen “The Nutcracker” elsewhere, Lucero said the tradition is still worthwhile.

“This one is unique because it feels like home,” said Lucero. “I’ve seen other performances of ‘The Nutcracker’ and they’ve been cold and untouchable. This one feels a lot more homey.” 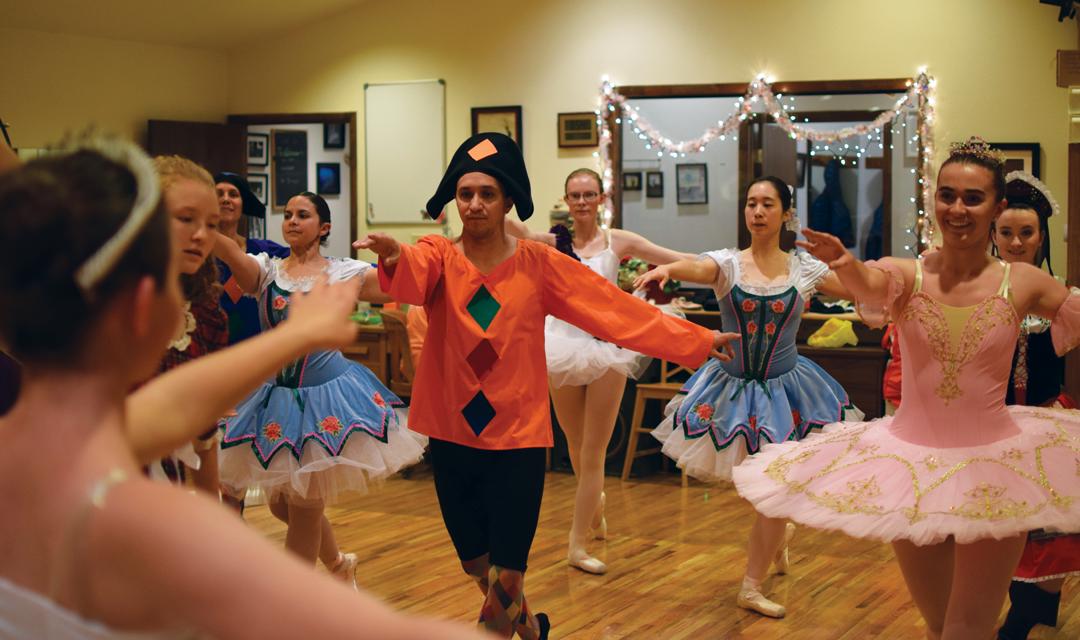 A group of Mountain Valley Dance Studios performers practice their routine for “The Nutcracker.” There are roughly 150 dancers for the five shows.