By: Marcia Dunn - Updated: 5 years ago

The stars came out in the middle of the day, zoo animals ran in agitated circles, crickets chirped, birds fell silent and a chilly darkness settled upon the land Monday as the U.S. witnessed its first full-blown, coast-to-coast solar eclipse since World War I.

Millions of Americans gazed in wonder at the cosmic spectacle, with the best seats along the so-called path of totality that raced 2,600 miles (4,200 kilometers) across the continent from Oregon to South Carolina.

"It was a very primal experience," Julie Vigeland, of Portland, Oregon, said after she was moved to tears by the sight of the sun reduced to a silvery ring of light in Salem. 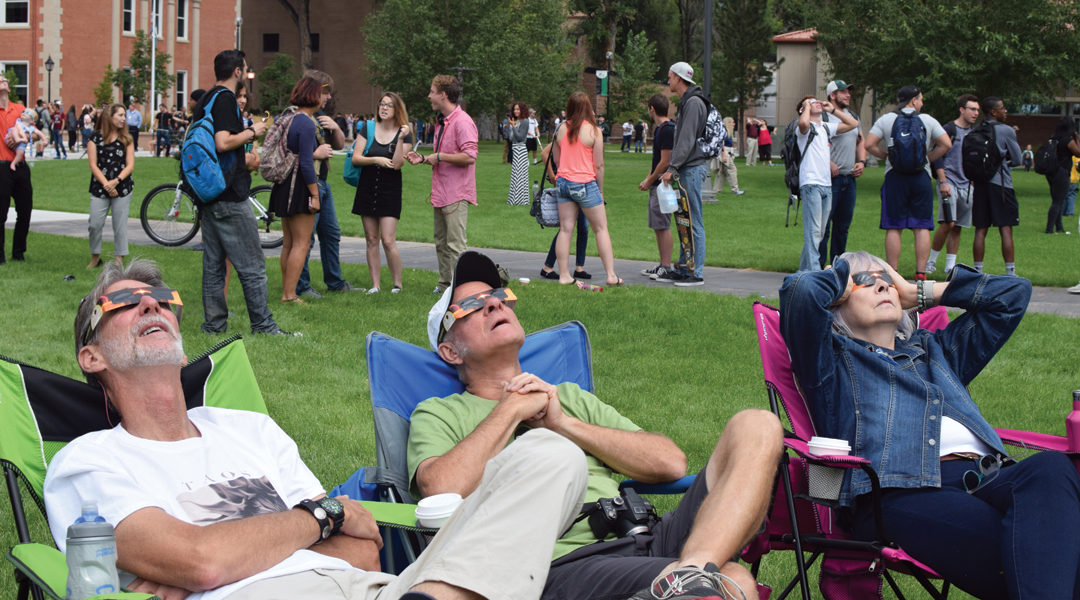 Bob McGaw, Dick Woods and Lin McGaw lounge to observe the solar eclipse outside of Adams State University's Zacheis Planetarium on Monday. The trio from Taos, New Mexico was just some of the hundreds of observers that flocked to the university to view the eclipse. Courier photo by Jefferson Geiger.

It took 90 minutes for the shadow of the moon to travel across the country. Along that path, the moon blotted out the midday sun for about two wondrous minutes at any one place, eliciting oohs, aahs, whoops and shouts from people gathered in stadiums, parks and backyards.

It was, by all accounts, the most-observed and most-photographed eclipse in history, documented by satellites and high-altitude balloons and watched on Earth through telescopes, cameras and cardboard-frame protective eyeglasses.

In Boise, Idaho, where the sun was more than 99 percent blocked, the street lights flicked on briefly, while in Nashville, Tennessee, people craned their necks at the sky and knocked back longneck beers at Nudie's Honky Tonk bar.

Passengers aboard a cruise ship in the Caribbean watched it unfold as Bonnie Tyler sang her 1983 hit "Total Eclipse of the Heart." 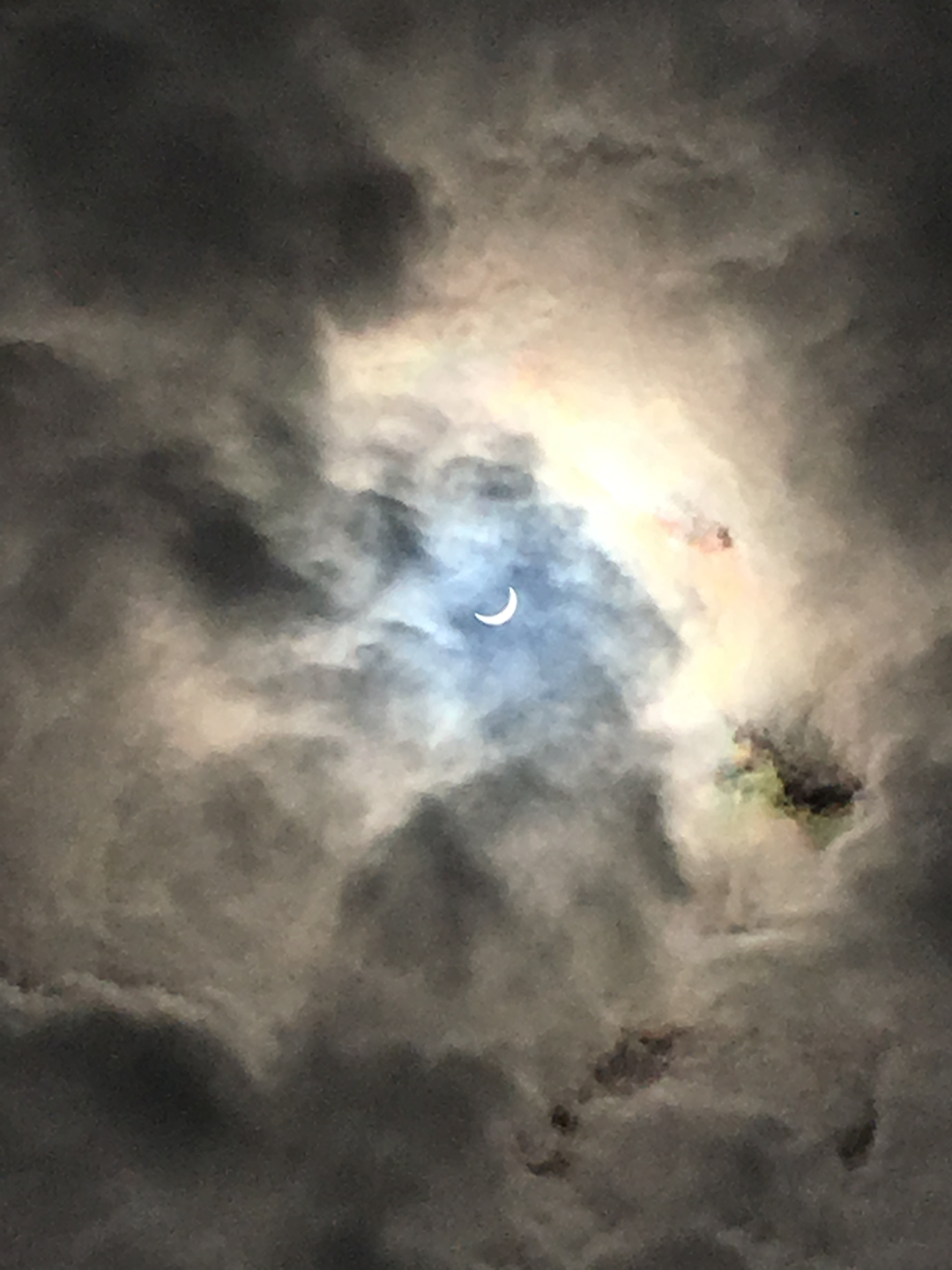 Several minor-league baseball teams — one of them, the Columbia Fireflies, outfitted for the day in glow-in-the-dark jerseys — briefly suspended play.

At the White House, despite all the warnings from experts about the risk of eye damage, President Donald Trump took off his eclipse glasses and looked directly at the sun.

The path of totality, where the sun was 100 percent obscured by the moon, was just 60 to 70 miles (96 to 113 kilometers) wide. But the rest of North America was treated to a partial eclipse, as were Central America and the upper reaches of South America.

Skies were clear along most of the route, to the relief of those who feared cloud cover would spoil the moment.

"Oh, God, oh, that was amazing," said Joe Dellinger, a Houston man who set up a telescope on the Capitol lawn in Jefferson City, Missouri. "That was better than any photo."

NASA reported 4.4 million people were watching its TV coverage midway through the eclipse, the biggest livestream event in the space agency's history.

"It can be religious. It makes you feel insignificant, like you're just a speck in the whole scheme of things," said veteran eclipse-watcher Mike O'Leary of San Diego, who set up his camera along with among hundreds of other amateur astronomers in Casper, Wyoming. 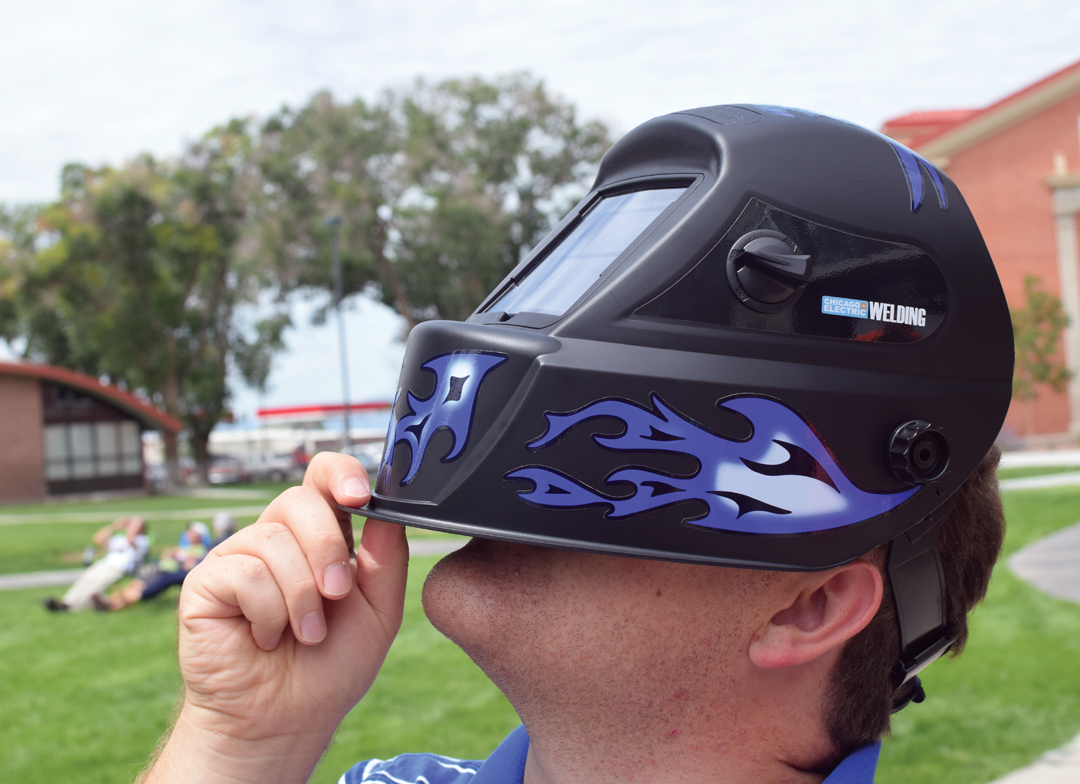 Ryan Entz uses a welding mask instead of a pair of paper glasses to look at the eclipse outside of Adams State University's Zacheis Planetarium on Monday. Special eye protection that blocks 99.99 percent of sunlight is required for safe eclipse viewing. Courier photo by Jefferson Geiger.

John Hays drove up from Bishop, California, for the total eclipse in Salem, Oregon, and said the experience will stay with him forever.

"That silvery ring is so hypnotic and mesmerizing, it does remind you of wizardry or like magic," he said.

More than one parent was amazed to see teenagers actually look up from their cellphones.

Patrick Schueck, a construction company president from Little Rock, Arkansas, brought his 10-year-old twin daughters Ava and Hayden to Bald Knob Cross of Peace in Alto Pass, Illinois, a more than 100-foot cross atop a mountain. Schueck said at first his girls weren't very interested in the eclipse. One sat looking at her iPhone.

"Quickly that changed," he said. "It went from them being aloof to being in total amazement." Schueck called it a chance to "do something with my daughters that they'll remember for the rest of their lives."

Astronomers, too, were giddy with excitement.

NASA solar physicist Alex Young said the last time earthlings had a connection like this to the heavens was during man's first flight to the moon, on Apollo 8 in 1968. The first, famous Earthrise photo came from that mission and, like this eclipse, showed us "we are part of something bigger." 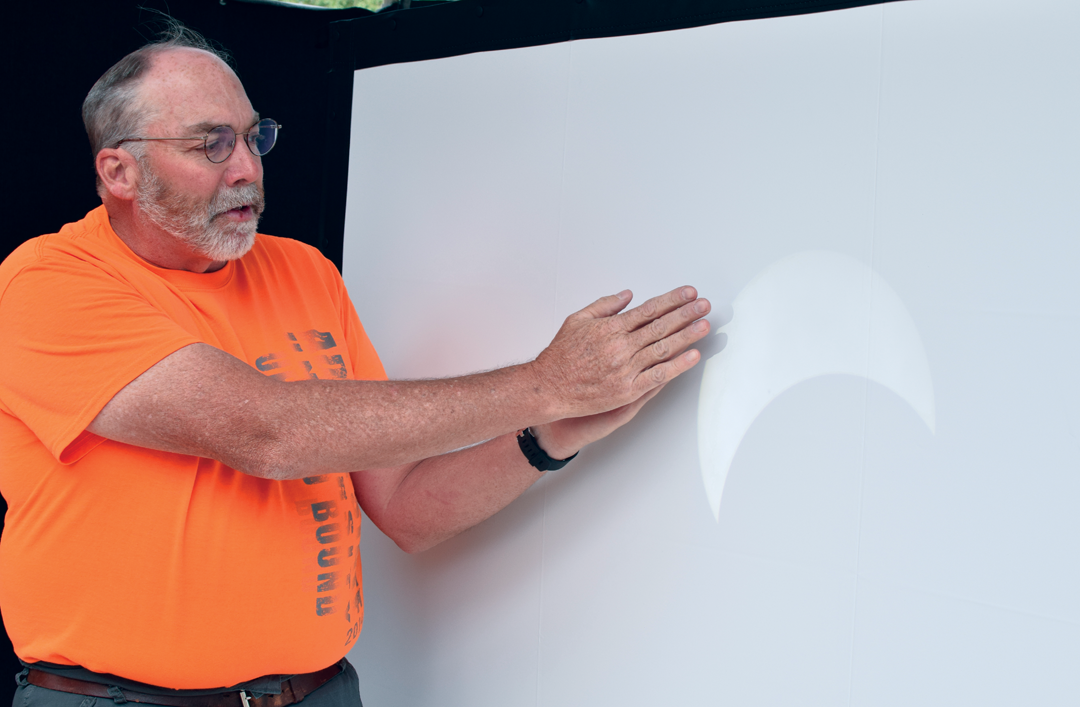 Though it was cloudy for most of the eclipse, the sun eventually appeared for Ortega Middle School STEM teacher Chris Dahle to point out a sunspot and limb darkening outside of Adams State University's Zacheis Planetarium on Monday. The planetarium had three other telescopes and two pinhole projectors for the eclipse. Courier photo by Jefferson Geiger.

NASA's acting administrator, Robert Lightfoot, watched with delight from a plane flying over the Oregon coast and joked about the space-agency official next to him, "I'm about to fight this man for a window seat."

Hoping to learn more about the sun's composition and the mysterious solar wind, NASA and other scientists watched and analyzed it all from the ground and the sky, including aboard the International Space Station.

Citizen scientists monitored animal and plant behavior as day turned into twilight. About 7,000 people streamed into the Nashville Zoo just to see the animals' reaction and noticed how they got noisier at it got darker.

The giraffes started running around crazily in circles when darkness fell, and the flamingos huddled together, though zookeepers aid it wasn't clear whether it was the eclipse or the noisy, cheering crowd that spooked them.

"I didn't expect to get so emotionally caught up with it. I literally had chill bumps," said zoo volunteer Stephan Foust. 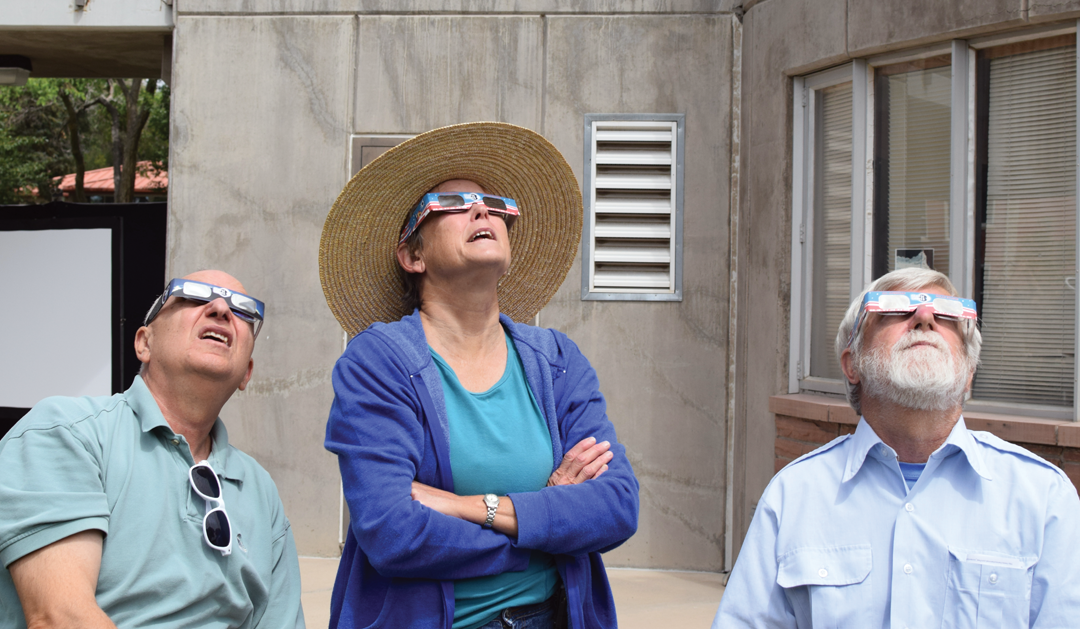 In Charleston, South Carolina, the eclipse's last stop in the U.S., college junior Allie Stern, 20, said: "It was amazing. It looked like a banana peel, like a glowing banana peel which is kind of hard to describe and imagine but it was super cool."

After the celestial spectacle, eclipse-watchers heading home in Tennessee and Wyoming spent hours stuck in traffic jams. In Kentucky, two women watching the eclipse while standing on a sidewalk were struck by a car, and one has died, authorities said.

The Earth, moon and sun line up perfectly every one to three years, briefly turning day into night for a sliver of the planet. But these sights normally are in no man's land, like the vast Pacific or Earth's poles. This is the first eclipse of the social media era to pass through such a heavily populated area. 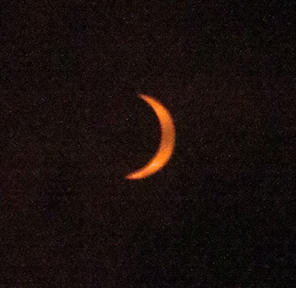 Audrina Mondragon, 8, pictured above, looks at the solar eclipse through a hydrogen-alpha telescope outside of Adams State University's Zacheis Planetarium on Monday. The solar telescope gives the sun a crimson appearance. Courier photo by Jefferson Geiger.

Local groups teaming up with Secure the Call