Firefighters also responded to two unrelated structure fires on Tuesday in which both residences were rendered uninhabitable.

By the end of the day, the brush fire had been contained, the evacuation order lifted and a Stage 1 fire ban enacted by Alamosa County Sheriff Robert Jackson.

The fire department responded on Tuesday to a brush fire that had begun the day before but took off with high winds on Tuesday on the southern edge of Alamosa initially off County Road 109 South (Old Sanford Road.) Although some haystacks were destroyed, no structures were lost in that fire, according to Alamosa Fire Chief Don Chapman. He said no livestock were reported lost either. 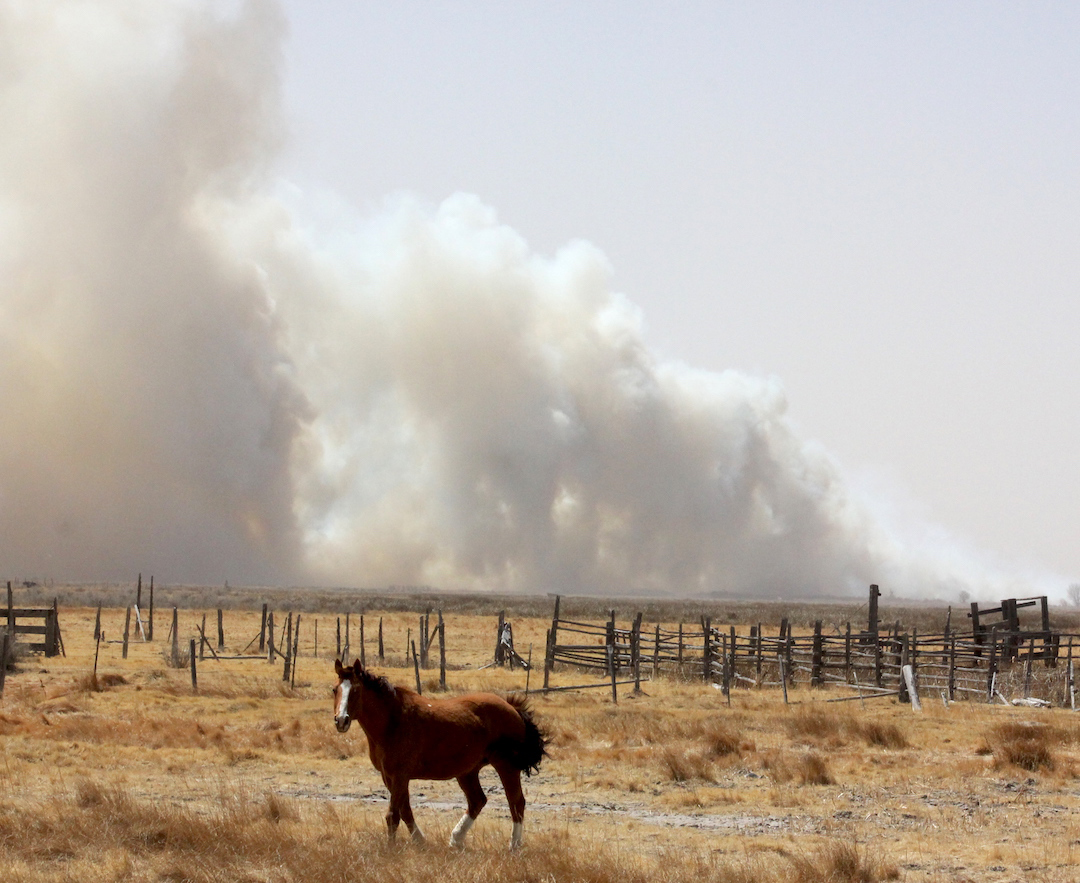 As a range fire rages in the background, a horse moves towards South River Road which was evacuated on orders of the Alamosa County Sheriff’s Department around 12:30 p.m. Tuesday just southeast of Alamosa. Courier photo by Keith R. Cerny.

He added that the firefighters were fortunate not to have any injuries, especially considering the severe wind conditions under which they were working. There was some damage to a couple of the fire trucks, but Chapman said that was to be expected.

“The crews did a fantastic job to minimize the loss of property,” Chapman said. 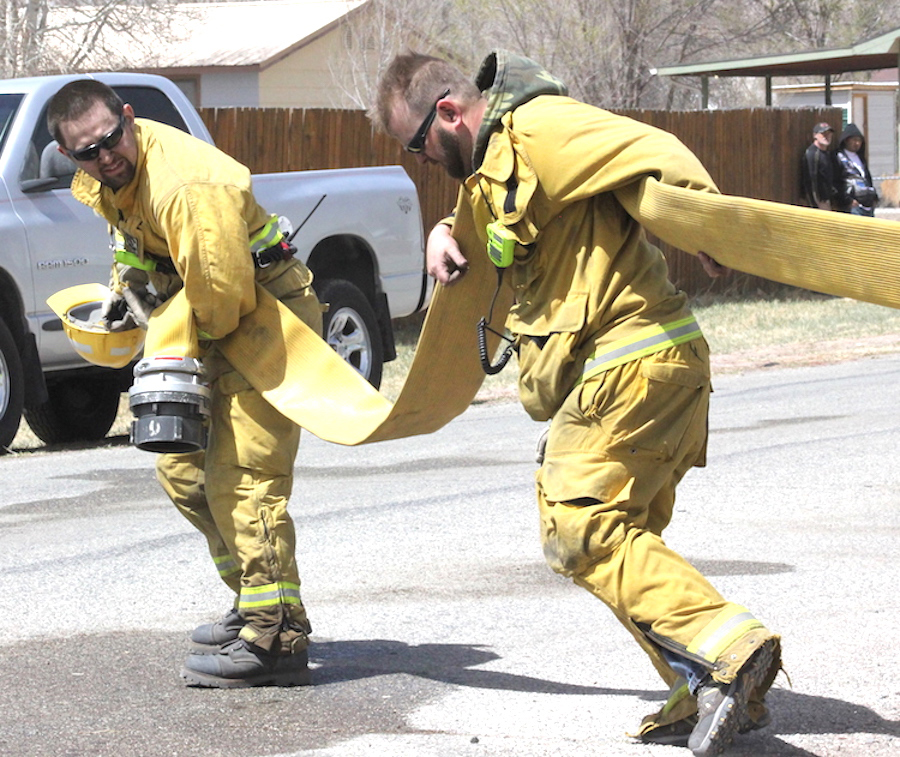 Brothers Tyler and Zach Cerny, members of the Alamosa Fire Department, drag a line nearly a block with the help of a few others to connect to a fire hydrant while teammates battled a structure fire on Old Airport Road. The blaze was believed to have not been related to a large wild fire several miles south of this location. Courier photo by Keith R. Cerny.

The brush fire encompassed just shy of 300 acres, Chapman said. At one point the fire chief believed the threat was significant enough to evacuate area residents including residents of the Century Mobile Home Park on south State Avenue. He said although the evacuation was an inconvenience, residents were understanding, and he believed it was better to take precautions.

Members of the Mosca-Hooper fire department were readying to provide mutual aid as part of the Alamosa County Rural Fire Protection District as residents along South River Road prepared to evacuate under orders from the ACSO. Courier photo by Keith R. Cerny.

Residents were evacuated to the Alamosa Family Recreation Center. 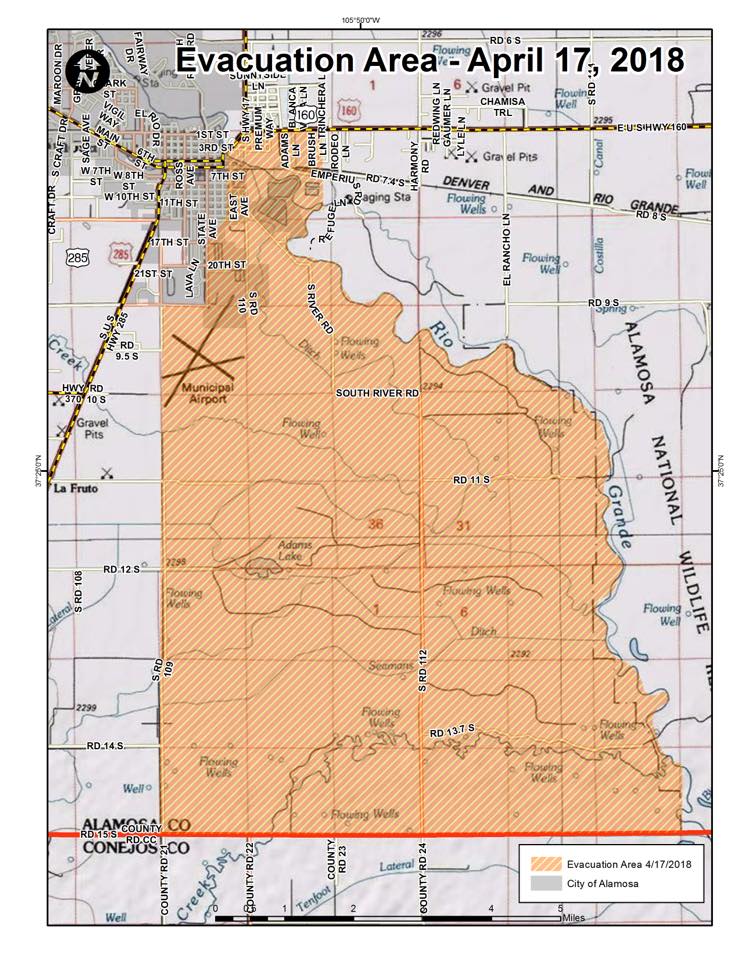 Firefighters contained the brush fire by Tuesday night, but Chapman said a couple of state engines and crews were expected to monitor the site on Wednesday. 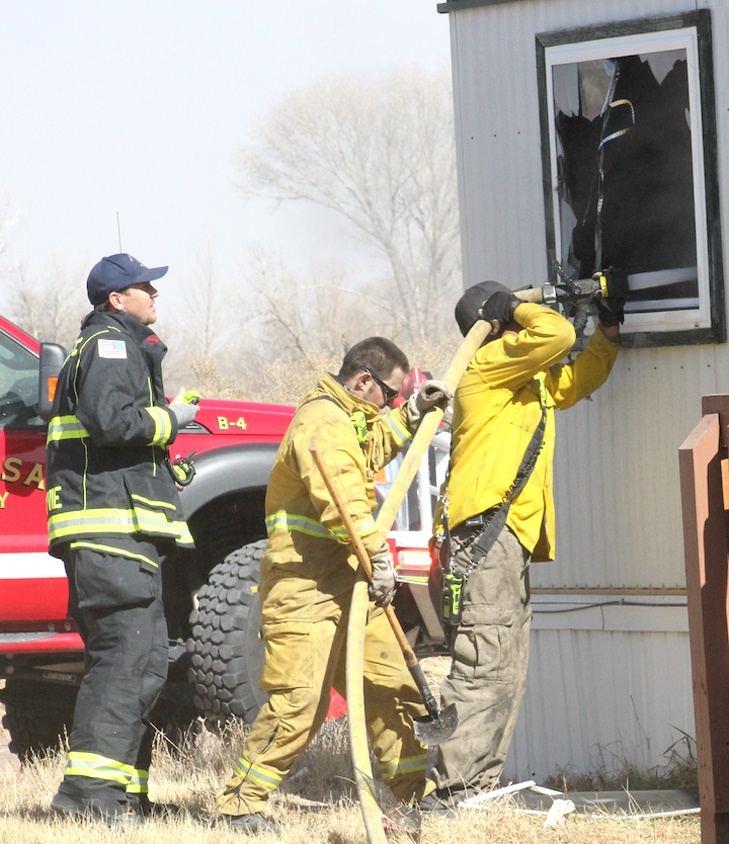 Alamosa firefighters blast water into a rear window on of a home in Mobile Century Park on the southeast side of town. Courier photo by Keith R. Cerny.

In addition to the brush fire, Alamosa firefighters responded to two unrelated structure fires, another fire on Road 7 South involving a woodpile and decking on a house as well as power lines sparking behind El Charro Café. 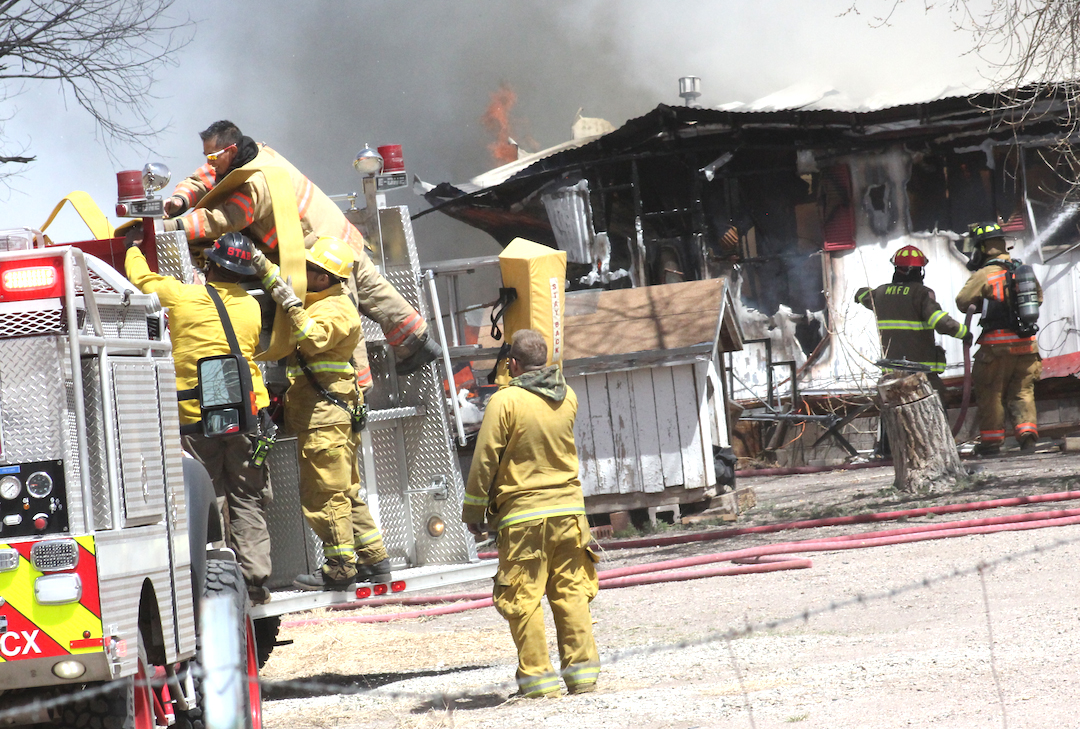 While members of the Mosca-Hooper fire department put water on a structure just off Old Airport Road in Alamosa, AFD members prepare a pumper to be attached to a fire hydrant nearly a block away. Courier photo by Keith R. Cerny.

Both of the structure fires were mobile homes, one in the 8,000 block of Old Airport Road and another in Century Mobile. The residence on Airport Road was totally destroyed, and the Century Mobile residence received enough interior damage that it was rendered uninhabitable, according to Chapman. 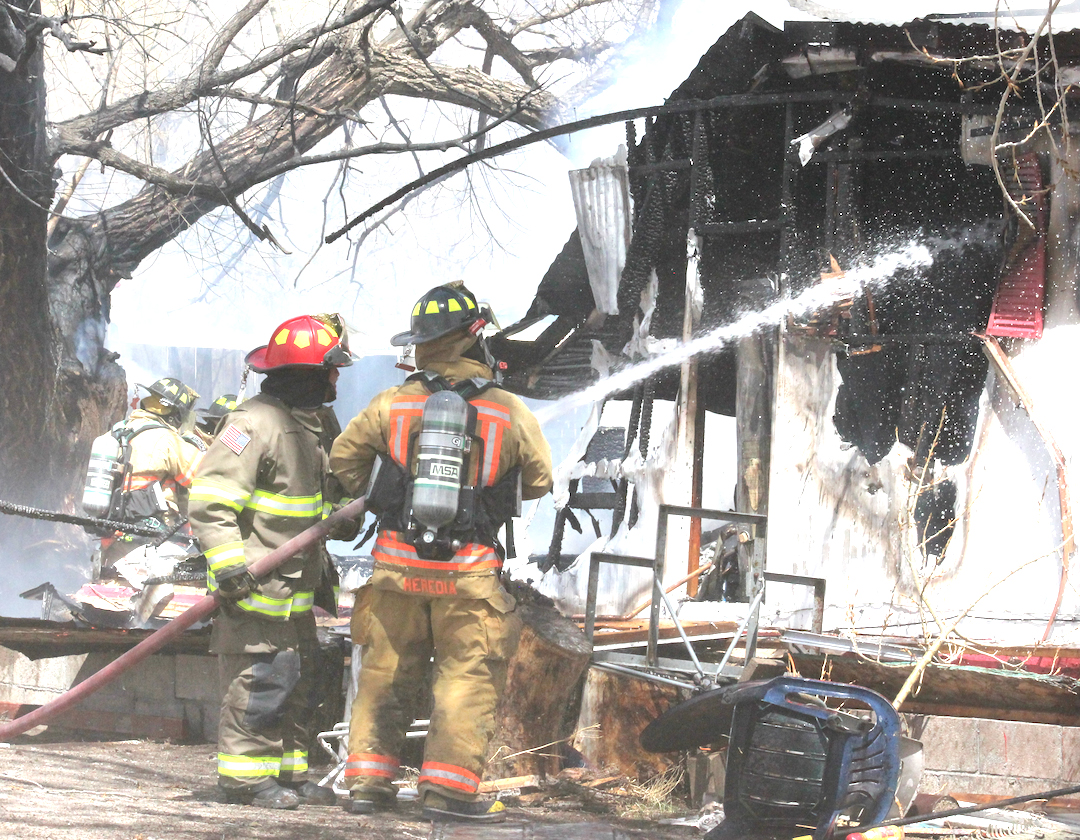 A mobile home and some smaller outbuildings were a total loss Tuesday afternoon as AFD and Mosca-Hooper firefighters contain the blaze and work in the background to keep the fire from spreading to other nearby homes. Courier photo by Keith R. Cerny.

The chief said he could not thank enough those who helped with the massive fire fight on Tuesday including the fire departments from Manassa, Romeo, La Jara, Capulin, Carmel, Monte Vista, Creede, Costilla County and Mosca-Hooper as well as Asphalt Construction, Cooley Excavation, City of Alamosa, Alamosa County Road and Bridge, Alcon Construction and other resources. 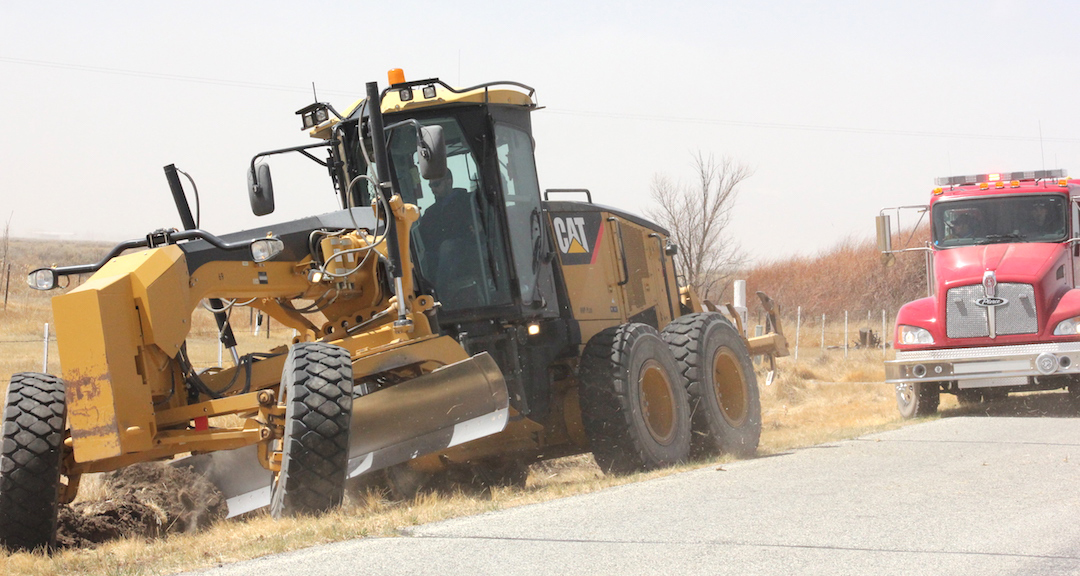 “We had overwhelming support out of the community, tons of food that showed up and drinks, a lot of support from the sheriff’s office and police department and the city’s public works department,” Chapman added.

He added a warning to residents to adhere to the fire ban and be very careful. “We have got some pretty tough times for a while.”

Contributing to this report were Keith R. Cerny, Jefferson Geiger and Ruth Heide.