ALAMOSA — Though Square Peg Brewerks has barely been open for five months, Alamosa’s newest brewery won a gold medal at the Great American Beer Festival (GABF) Saturday for their Waverly Tulip, a Dutch-style Kuyt. It is the first prestigious GABF medal to have ever been won by a San Luis Valley brewery.

According to the Brewers Association, 2,216 breweries from around the country entered 7,923 beers in 98 categories. Of those, only 293 walked away with bronze, silver or gold medals. Hundreds of beer experts from 13 countries judged during five different three-hour sessions over a three-day period to find the best of the best. Yet, they can choose to not award any medals if they feel no beer meets the criteria.

The Waverly Tulip faced off against 39 other beers such as Finnish-style Sahtis, Kentucky Commons, and Peruvian Chichas in the relatively young and small category that has only been around for a total of six years after the indigenous/regional beer category was renamed in 2014.

In comparison, categories average at 81 entrants and the highly competitive American-style India Pale Ale class had 408 this year.

Martinez and co-owner Derek Heersink, both 28, decided to try crafting the Kuyt because of Heersink’s Dutch heritage and connection to the Waverly area. Never seeing or tasting one before, Martinez began researching recipes in July.

Finishing just five days before the GABF deadline on Aug. 28, the completed product is made with ingredients like malted oats from the Colorado Malting Company, wheat and a shrub native to peat bogs known as sweetgale. The beer, which was popular in the Netherlands from 1400-1550, is a pale straw color with a slight tartness from the oats and clocks in at 5.8 percent alcohol by volume and 14 International Bitterness Units.

“It wasn’t the go to for everybody, but the people who drank it and really liked it were not the ‘typical’ beer drinkers,” said Martinez.

Ironically, Martinez wasn’t impressed with the Kuyt and didn’t bring any to serve the public during the festival. Instead they gave the 60,000 festivalgoers at the Colorado Convention Center their other contenders: the Colorado Common Cream Ale, the Duke Vienna Lager and the Wheat Boss South Bavarian Hefeweizen. 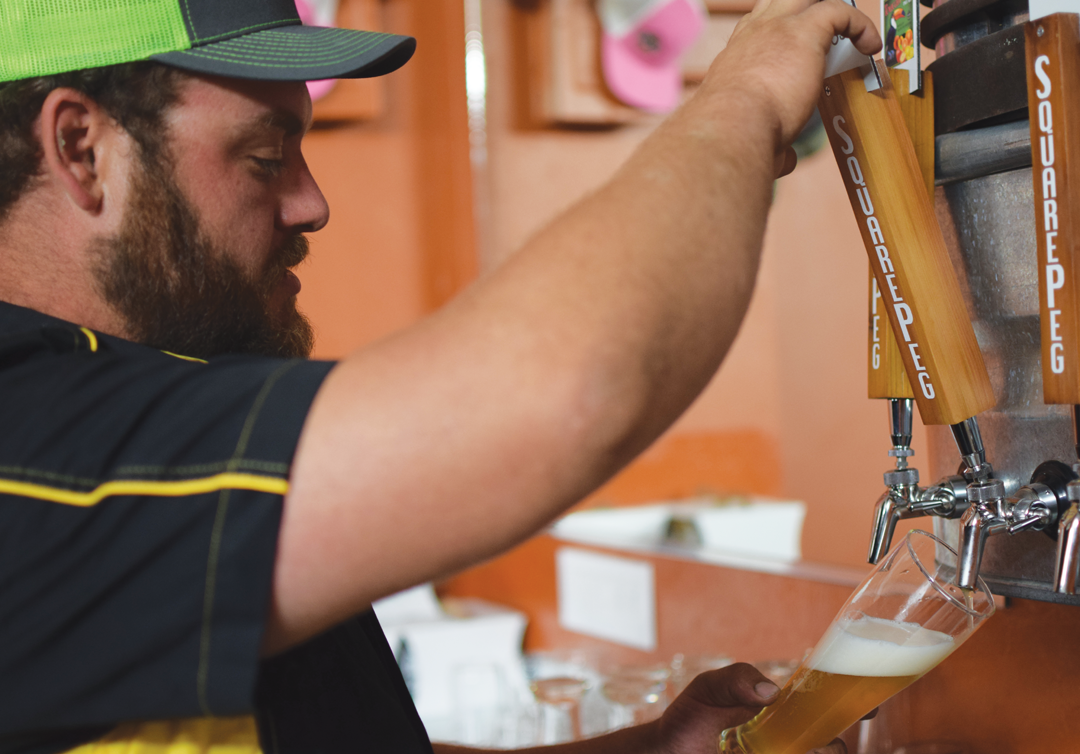 One-year-old Crestone Brewing Company joined Square Peg in Denver with four of their own beers. However, they didn’t win a medal.

“We got a lot of good feedback on all of our beer,” said head brewer David Carlberg, “and we’re definitely going to be doing it again.”

It is not incumbent on the breweries to compete. Alamosa’s San Luis Valley Brewing Company and Del Norte’s Three Barrel Brewing Company both figure it’s been five to six years since they’ve entered the competition. Neither has medaled though SLV Brewing received honorable mention for their Valle Caliente Green Chili Lager in the past.

“We may jump back in at some point but we’ve been pretty happy trying to grow our roastery, brewery and take care of the local needs versus spreading ourselves thin up there,” said SLV Brewing Company Owner Scott Graber.

“Beer judging and competitions are great,” said Three Barrel Brewing Company Brewmaster John Bricker, “but we also have to concentrate on our business model and make sure we are around next year so we could enter the contest.”

Square Peg’s Valley native co-owners worked for approximately three years on opening the brewery, but their story goes back farther than that.

The pair has known each other since riding the bus from Waverly to school in third grade. When Martinez got into homebrewing, Heersink told him that they could make money off his beer. The two put their heads together and worked hard on accomplishing that goal.

“It’s cool because we can play on each other’s best strengths,” Martinez said, “and it’s taken some time to develop that part of our relationship. It’s definitely like a marriage.”

Heersink, who farms alfalfa, barley, pinto beans and other vegetables, uses his agricultural business and crop science degree from Colorado State University to run the business side of the brewery.

Martinez graduated with a degree in earth science from Adams State University and taught social studies at Center High School for about a year. Before then he brewed at San Luis Valley Brewing Company for five months and has a total of six self-taught years of homebrewing under his belt.

“I’m always learning and I make it a point to expand my knowledge,” Martinez said. “You should gain something from everything you do, always, regardless of what it is.”

While degrees help, the duo believes that more than school is required to start a brewery.

“Entrepreneurship is not something you can teach,” Heersink, who also owns a fertilizer company, said. “You can refine it, but it’s not something one can learn. It’s either in your DNA or not.”

The two first thought that turning local potatoes into vodka would be a good idea. However, a rotten batch of potato mash quickly made them stop and rethink their plan.

“We didn’t know anything about making it,” Martinez said. “We didn’t even Youtube or Google it.”

In 2014 they decided to get serious about the fermentation sciences again. After about six months of looking for the right space, they signed the lease on April 20, 2016. With the help of friends and family, they started demolishing walls and cleaning out the old Amigo.net offices last July and Martinez began brewing in April.

Being two doors down from another brewery is less than ideal, but Heersink and Martinez are happy with the space on Main Street. “It’s an awesome building that used to be Husung’s Hardware,” Martinez said. “We have a lot of pieces from there still in here.” Parts of old farm equipment and truck parts adorn the walls of the rustic tasting room, and Heersink’s parents donated 137-year-old wooden cabin timbers to make the bar.

Square Peg is classified as a nanobrewery, and uses a three-barrel system that was purchased from Fairplay’s South Park Brewing. Though it means they have to brew frequently to keep up with demand, it also allows for flexibility. With an estimated 10 unique styles made since the start, they never have to commit with a beer for a long period of time.

It takes Martinez an average of 21 days total to make a beer, from pitching the yeast to pouring the pint. Though recipe creation is relatively quick, he’ll keep iterating until it comes out just right. The version of the Wheat Boss on tap now isn’t the same as what they sent to GABF.

“We don’t want to rush beer,” Martinez said. “Our final product is a representation of us.” 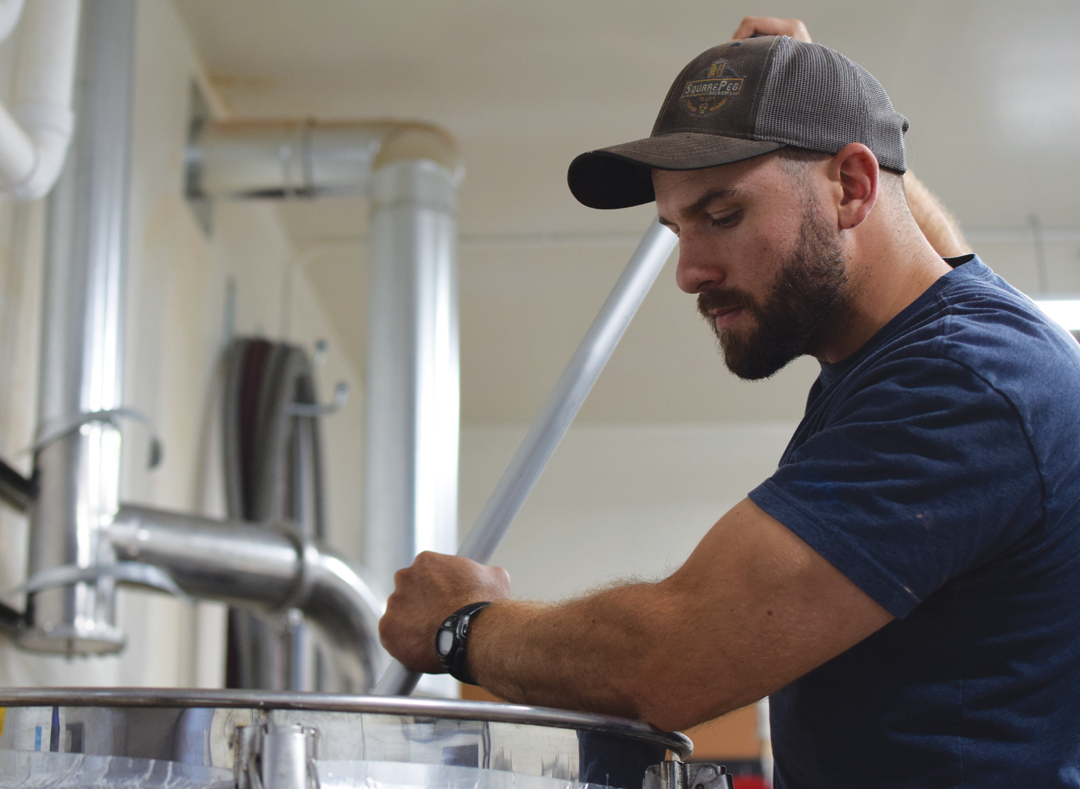 Feedback from soft opens told them to ditch the India Pale Lager and Chelada, a beer based off of the Mexican drink michelada made with Clamato. It will be a while, however, until customers can enjoy the Waverly Tulip again. The beer sold out Friday before the awards were announced.

“We’ll do it again soon so people can taste it,” said Martinez, “but we’ll probably roll with it as a seasonal and revisit it every year.”

All of their beer is entirely unfiltered. “When you start filtering you take out a lot of the profile,” Heersink said. Instead, they opt for gelatin to fine out yeast and other particles. The gelatin makes sediment heavier so it falls to the bottom of the tank naturally. Additionally, all of the malt in their beer comes from Heersink’s barley that is then sent to Colorado Malting Company for processing.

“I saw that it would be a good avenue to get my barley into the consumer’s hands directly,” Heersink said. “Our process starts with the seed and ends in your glass.”

“I never realized that a farmer has so much control,” Martinez added. “It’s not like you just throw seed in the ground. It’s a craft product in itself, which is really cool.”

Heersink hopes that their beer will get other breweries to care more about the barley. “Where this barely comes from is the best place in the world to get barley,” he said, “so you should buy it here.” His crop is also sent to Golden to be used in Coors, a beer he hasn’t stopped drinking just because he’s in the craft brewing business.

Though the process has been stressful, Martinez and Heersink are glad to be open and working together. “Derek is still looking at the big picture which is nice,” Martinez said, “because then I can get caught up in the little picture and not be at risk.”

“We both legitimately value each other’s opinions.”