Kylee Christensen speeds into the paint looking to get two points the hard way during Friday's 52-10 victory. Christensen led her Thunderbirds with 19 points and a 75 shooting percentage from the free throw line.

MOSCA— Friday night at SDCHS gymnasium Thunderbird faithful had plenty to cheer about. The Sangre de Cristo basketball girls (13-1-0) got back to the business of stacking wins with a 50-14 victory over Creede (6-7-0). The Thunderbird boys (13-1-0) got hot and took down previously undefeated Creede (12-1-0). All that accented by a halftime presentation acknowledging Sangre de Cristo as a District of Distinction in the eyes of the Colorado Department of Education.

Before Friday night’s contest the Sangre de Cristo girls suffered their first loss of the season in the week prior and were most likely raring for an opportunity to get the taste out of their mouth. The lady Miners were riding a high after taking down Manzanola in commanding fashion with a 52-10 win.

Sangre de Cristo took an early lead and never relented. 12 first half points from junior Jessica Slane spurred the Thunderbirds to a 24-9 half time score. According to preliminary stats Slane contributed 17 points and 13 rebounds to add what looks like yet another double-double to her totals in the winning effort.

The Miners were doing a good job forcing giveaways pulling 21 turnovers out of Sangre de Cristo yet couldn’t capitalize when they had possession giving 24 right back. Creede would register one point in the third off a free throw from Chloe McComas. McComas’ 5 points would pace the Miners for the night.

Having made it a 29-10 game the Miners fell silent as Sangre de Criso ran wild with 18 unanswered points. After the run of dominance the Thunderbirds would coast to the game’s 52-10 ending. Kylee Christensen led the Thunderbirds going 6 of 14 from the field and 6 of 8 on free throws for 19 points.

On the boys' side Sangre de Cristo and Creede needed not be reintroduced for the players to know what was at stake. Creede’s boys entered the contest riding high with a perfect record and top rankings amongst the polls and the percentage index.

The Thunderbirds carried a chip on their shoulder from Dec. 1 where Creede defeated them at their home tournament besmirching their record with a lone loss. Friday afforded the Thunderbirds an opportunity to return the favor.

The Miners settled in immediately rattling off 15 points thanks to a big first quarter from Isaac Borchers. Borchers hit three buckets and was perfect on four trips to the charity stripe for 13 first quarter points. Sangre de Cristo was forced to sustain themselves on a three from Zebulon Stephens before Manuel Lopez hit one to make it 17-5 at the close of the first. 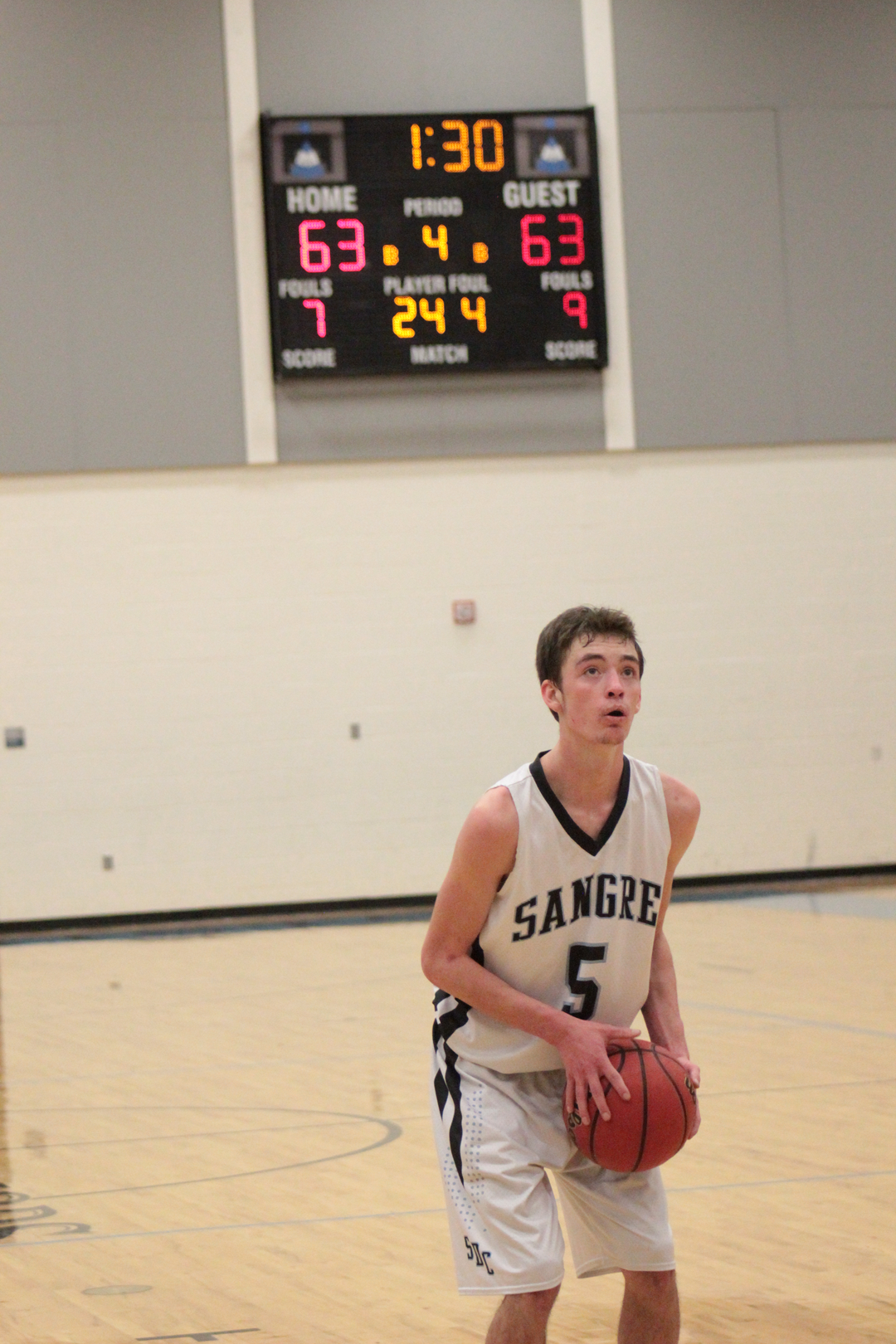 Manuel Lopez settles his nerves as he prepares to put the Thunderbirds ahead for good on Friday night to split the series with Creede at one a piece. Lopez hit four threes to lead the T-Birds with 19 points. (Courier photos by Stephen Jiron)

Manuel Lopez lined up for his second charity shot with the scoreboard showing 63 all. The Sangre de Cristo faithful likely tempered expectations since the Thunderbirds tied the game at 25, 53, and 61 points without being able to maintain a lead.

Lopez hit his second toss to put Sangre ahead with a minute and a half remaining in the game. Lopez was the leading scorer for Sangre de Cristo with a 19 points and tied for the team lead for three pointers with Christensen hitting four each from downtown.

From there Creede would attempt to foul on defense and gain ground on offense. The Miners eventually fell a point short of keeping the game going and by extension keeping their streak alive with the Thunderbirds taking a 67-66 game.

Borchers placed Creede on his back  as he went 8 of 11 on his free throws en route to his most productive game of the season with 30 points. Creede will be back at it with a game tonight against La Veta at home. Sangre de Cristo will take little reprieve until they return back to action traveling to meet Centennial on Feb. 2.