Tigers stymie Sargent in 'The Pit'

Kendra Parra of Del Norte blitzes to the hoop on a rush.

DEL NORTE — Friday night it was a meeting between league rivals in the 2A Southern Peaks league on the basketball court. Del Norte picked up two important wins towards running the table come the district tournaments. The lady Tigers defeated Sargent by a score of 68-40. The boys from Del Norte also picked up a win in a 49-30 game.

The girls from Del Norte (13-3-0) have been moving the mark in the correct direction with nine straight wins entering their meeting with the Farmers. The last loss suffered by the Tigers was to Swink. Swink’s RPI has them ranked at number seven in the state.
Sargent’s girls (7-9-0) have been battling to get their head above .500. After using a three game streak to get to 7-7 they entered Friday’s tilt with a loss to Lamar and a 7-8 record.
Del Norte showed no quarter to the Farmers in the early going. A big quarter from Emily Gallegos and Kendra Parra rocketed the Tigers to a 16-2 lead just two minutes into the game. Gallegos would lead the Tiger’s efforts in the first quarter with 8 points, another bucket in the second quarter totaled Gallegos’ day at 10 points. The Tigers would keep hammering away at the Farmers until they had earned a 23-point deficit at the close of the first.

After getting the game taken to them in the first 8 minutes, Sargent started fighting back with a 13-point second quarter. Weighed down by their the slow start Sargent would go to the half down 44-17. With their back to the wall Sargent came out swinging in the third quarter.

Led by junior Lainie Dillon’s six points, the third quarter would be the only quarter Sargent would outscore Del Norte. Dillon would go on to lead the Farmers in scoring with 12 points for the evening. The Farmer’s awakening would not be enough as Parra went wild in the second half for 18 points. Parra would total 28 points, boosting her 11th place state ranked 20 points per game, as the Tigers picked up number 13 on the season. 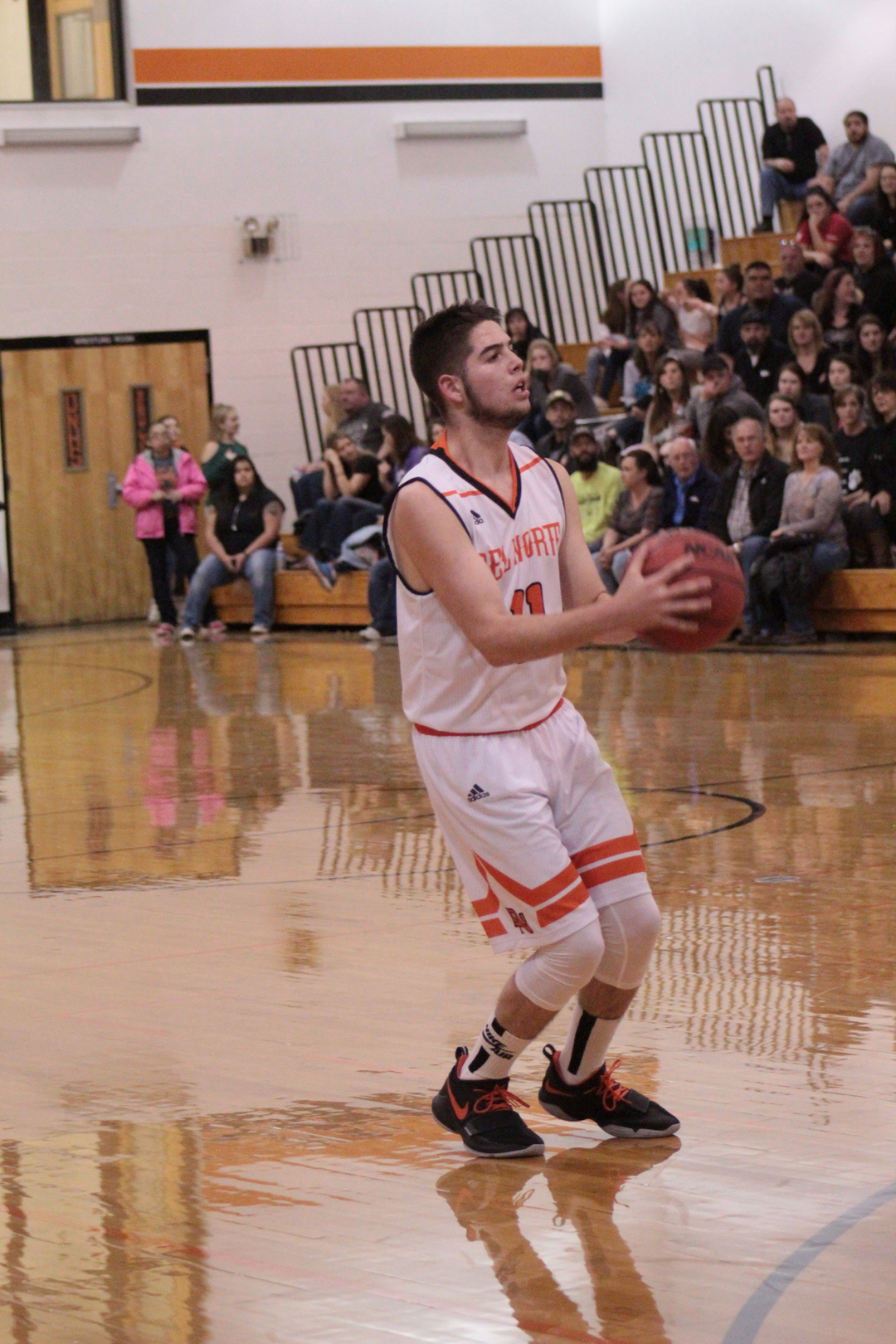 Del Norte senior Carlos Parra pulls up for a three point attempt.The Parra siblings both continued a fantastic 2018 campaign each hitting the Farmers for more than 20 points. They will look to keep this success going as the district tournament fast approaches.(Courier photos by Stephen Jiron)

Like the girls Del Norte’s boys (13-3-0) last loss came in December to the Swink Lions. Since then it’s been nothing but wins, nine in a row before the meeting with Sargent. The Farmers (8-7-0) fell to Lamar after building a three game run entering Friday’s contest.

The Tigers struck first and after five unanswered points the Farmers got their own roll going to trail 9-5. Propelled by a 7-point first quarter from Carlos Parra the Tigers would own a 16-7 lead.

Parra’s numbers were a little lower than the first ranked scorer (as of press time) usually churns out. Parra’s shooting percentage from the field fell steadily as the game went on, going from 75 percent in the first to 33 percent in the fourth quarter.  Which could explain why his 21 points from Friday night came in a full ten points below his average.

Despite that, Parra was still a force; according to preliminary stats he would lead the team in steals with 4 and tie for the team lead in rebounds with Izeah Peterson, each pulling down 6. After both teams slumped in the second quarter with a combined nine points the Tigers would find their rhythmbefore Sargent opening the fourth quarter 34-15.

The final stanza was kind to Sargent, who would have their best quarter with 15 points led by the five from Eddie Gonzalez. The scoring title for Sargent went to junior Brandon Behil with 8 points; Gonzalez came in second with 7. The Farmer’s final rush would not be enough as Del Norte answered every point.
The Farmers will close their season with a favorable schedule with two opponents whose records are a combined 8-24 beginning with Crested Butte on Feb. 16. Del Norte will receive a test from Rocky Ford on the road tonight.