LAKEWOOD—After some frustration from coaches around the state because of uncertainty by the Colorado High School Activities Association, the 2017 State Track and Field Championships made history this past weekend. For the first time since its inception, the three-day extravaganza was cut down to two days on Saturday and Sunday. Unlike the normal meet, all events were run as timed finals and the field events only allowed competitors to have four attempts.

Despite several San Luis Valley teams spending two extra days in a hotel, they rose to the state competition occasion and performed well. In all, the Valley garnered 38 medals and four state championships on the weekend. Class 1A was able to get five while Class 2A earned 22 and Class 3A earned 11.

Here are several storylines for the San Luis Valley.

Monte Vista senior Jose Flores-Lauro took advantage of his four jumps as he used his final jump to win the state title and in the process, he broke the Monte Vista High School long jump record by more than three inches. His final jump was 45 feet, 7.5 inches while the previous best jump in school history was 42 feet, 2 inches.

In addition to Flores, Sanford junior Brady Lenz earned a medal by finishing in fifth with a jump of 43 feet, 2.5 inches, just off his season best.

Sanford senior Casey McDaniel finished a spot behind his teammate in sixth with a jump of 43 feet, 1 inch, six inches off his personal best.

By virtue of the least amount of misses, Creede junior Regnor Vondedenroth was able to outlast Pikes Peak sophomore Tommy Harmon for the Class 1A pole vault championship. The champion passed all the way until 11 feet, 3 inches and on his first attempt he was able to clear. He also cleared 11 feet, 9 inches, 12 feet, 3 inches and 12 feet, 9 inches on his first attempt.

“I came out here and I’m happy to be here, everyone is so nice and I had a lot of help,” said Vondedenroth who set up a personal record. “It came down to the last two and we competed very much, I got some help from other schools, just four weeks ago, I was only able to clear 10 feet.”

Harmon missed his first two attempts at 11 feet, 3 inches but the cleared the next three on the first attempt. Neither competitor was able to clear at 13 feet, 3 inches.

Alamosa senior Isaiah DeLaCerda has had a year to remember. After winning a third state cross country team title in the fall, he went on to win his third wrestling championship.

This season in track DeLaCerda has taken advantage of his opportunities as earlier this season in the 2017 Pueblo Twilight Invitational, a meet known for fast times in distance events, DeLaCerda shattered a 32-year-old Alamosa High School record as he posted a 9:31.78. DeLaCerda culminated the 3,200-meter portion of his season on Saturday when he finished third. He finished with a time of 9:36.01 while his teammates, senior Caleb Palmer (10:06.86) and senior Caleb Berlinger (10:12.32) finished in 13th and 15th, respectively. The overall winner was The Classical Academy’s Tanner Norman, who won in a state meet record time of 9:14.54.

On Sunday, he went on had another tough race but he battled through and earned a fourth place medal in the 1,600-meter run. He found himself trapped in a box after the first 200 meters. However, as the race progressed and the crowd started to thin, DeLaCerda found a way to draft out to the right and started slowly picking off runners until the final lap in which he put the hammer down and moved into fourth place and posted a four second personal record in the race with a time of 4:28.96.

Caleb Berlinger was just off his personal record as he finished in 16th place with a time of 4:37.83.

In the 4x200 meter relay, the same group of girls moved up one spot and earned sixth place as they finished with a time of 1:50.51.

The 4x100 meter relay was unable to make anything happen in their race as they finished in 16th place with a time of 54.30.

In the 4x400 meter relay on Sunday evening, Patrick, Haefeli and Jones teamed up with sophomore Kiela Madrid and ran a 4:18.18 to finish in fifth.

For the third straight year the Alamosa Mean Moose won the 4x800 meter championship. The race was an interesting affair early and quite frankly until the end of the third leg. However, once the anchor, senior Oscar Martinez, had the baton the race was over. The Moose gapped their nearest opponent, Gunnison, by over 10 seconds. They posted an 8:00.12, a mark that bested the Alamosa High School record by hundredths of a second.

The race started with senior Isaiah DeLaCerda, who brought his state title total up to nine with the relay win, getting trapped near the back of the pack after 200 meters.

“I was scared at first but then I saw that I went through the 200 split right where I wanted to be,” noted DeLaCerda. “The second lap I didn’t feel anything.”

He then continued to make up the deficit he faced over the next 600 meters and put Alamosa within striking distance for sophomore Chad Jackson.

Jackson then moved into a one-on-one battle with Gunnison’s runner throughout the race and Alamosa held a slight lead entering the third leg. “I felt good because the pace was exactly how I felt,” Jackson noted.

Senior Caleb Palmer then made the race interesting. He held the lead after 400 meters before Gunnison sophomore Braydon O’Niell passed Palmer entering the final 300 meters. Palmer was able to rattle back and regain the lead in the final 50 meters.

That is when the race was over. Martinez took off and ran his typical race that saw him just pull away from the competition. “I think I built such a big gap in the first lap, I feel like I just broke the Gunnison runner,” Martinez noted.

On the girls’ side, the Sanford Indians had a stellar day as the team of sophomore Hannah Crowther, sophomore Karley Caldon, freshman Abbey Sittler and sophomore Chelsea Edgar improved by 19 seconds to finish in seventh place, a huge jump from their 14th seed.

Sargent’s 4x800 squad posted a season record by less than a second; however, they finished in 12th place with a time of 8:54.84

In the 300-meter hurdles, a neck-and-neck race saw senior Casey McDaniel of Sanford narrowly miss the state title as junior Benjamin Jackson of Resurrection Christian posted a time of 40.35 to outlast McDaniel, who finished in 40.38.

On Sunday, Alamosa senior Oscar Martinez got everything off and running as he demolished his personal record in the open 800 meter. He won the race with a time of 1.55.12.

“I came in really confident, after winning yesterday (4x800). I came back a little tired,” noted Martinez after the race. “But I didn’t let that get to me, I told myself that I wasn’t here to be tired.”

The win for Martinez comes after a sixth place finish last year in which he entered as the No. 2 ranked runner. “I knew this year I had to go out harder than last year,” he noted of the comparison. “I was willing to hurt, that’s a huge part of running the 800, and you can’t get comfortable on your face.”

Like DeLaCerda, Martinez will finish his storied carrier with an impressive mark in the title column as he finishes with seven titles, three in cross country, three 4x800 and the open 800.

Sangre de Cristo’s Tanner Freel was able to get a personal record by a foot and two inches on Saturday. However, he was five inches short of getting the Class 1A State Championship in shot put. Marco Ramos of Arickaree won the title with a throw of 44 feet, 2 inches while Freel ended his prep career with a 43 feet, 9 inch throw.

Despite posting a season best time of 44.62, the Monte Vista Pirates narrowly missed the state title by half a second in the 4x100 on Sunday afternoon as Wiggins earned the title. The Team of senior Moises Juarez, senior DeAndre Sanchez, senior Noel Heredia and senior Jose Flores battled through and were just nipped at the line.

The first race of the entire weekend saw Center junior Camille Ruggles battle to maintain her 17th seed as she came back from the final spot and finished in her seeded spot with a time of 17:50.03 in the 3,200 meter run.

The 800 sprint medley relay was not kind to one Valley team early Saturday. In the Class 3A event the Alamosa team of sophomore Nicole Gonzalez, junior Andrea Rodriguez, sophomore Unique Espino and junior Skylar DeHerrera, finished in 17th with a time of 2:05.44, despite entering the meet with a seed 12 seconds faster.

Alamosa senior Jessica Archuleta-Trujillo finished in 15th in the 300 hurdles as she finished in 49.72, just tenths of a second off her season best.

In the boys’ discus, Center’s Sean Cook barely missed the awards podium as he finished in tenth while Del Norte’s Hafen Campbell finished in 11th. They threw distances of 132 feet, 8 inches and 128 feet, 2 inches, respectively.

In Class 1A girls’ discus, Creede’s Olivia Madrid earned a medal by finishing in eighth place with a throw of 92 feet, 5 inches.

In the 3A high jump, freshman Taylor Motz finished in 11th place as she was able to clear 4 feet, 11.5 inches.

In other events… Sunday

Sanford senior Casey McDaniel was stellar as well as he finished in fourth place in the 110 hurdles with a time of 16.02, just a thousandth of a second off his personal record.

Sangre de Cristo junior Dillon Palmgren bested his finish from last year as he finished in seventh in the event with a time of 16.84.

Vondedenroth finished seventh in the Class 1A discus as he fouled his last two attempts but had a throw of 118 feet, 10 inches.

Caroline VanBerkum finished in 12th in the girls discus as she had a throw of 94 feet, 1 inch, 10 feet off her season best.

In Class 2A shot put, Center senior Joseph Sierra finished in fifth place with a throw of 43 feet, 7.25 inches. 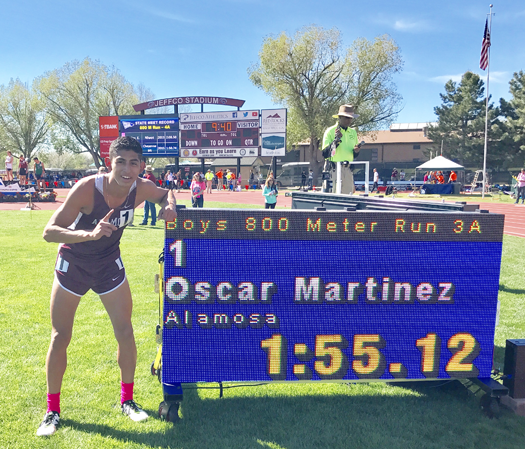 Alamosa senior Oscar Martinez poses with the LED screen that showed his winning time after Sunday's Class 3A state championship run of the 800-meter run at Jefferson County Stadium in Lakewood. 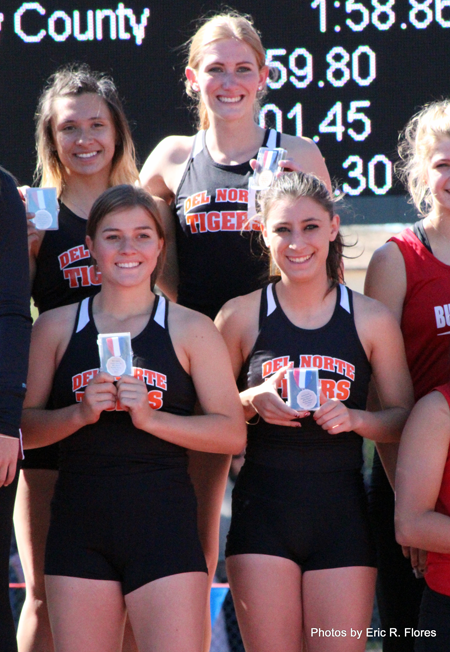 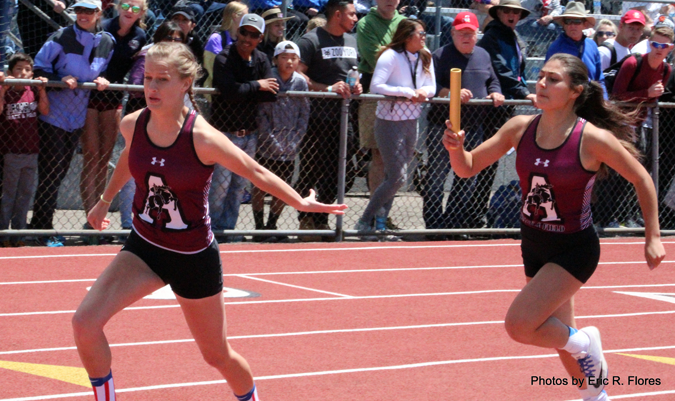 Alamosa's Tara Sowards awaits the hand off from teammate Allyssa Romero in the 4x200 meter relay on Saturday. 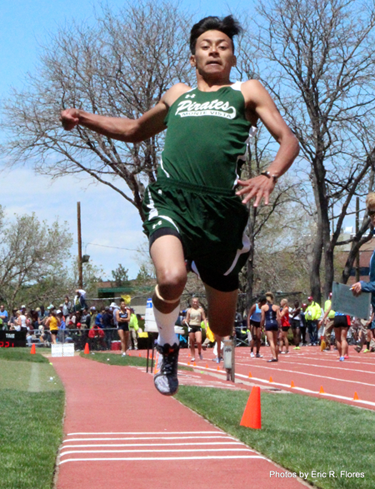 Monte Vista's Jose Flores broke Monte Vista's school record by five inches with his final jump of the competition on Saturday as she won the event. 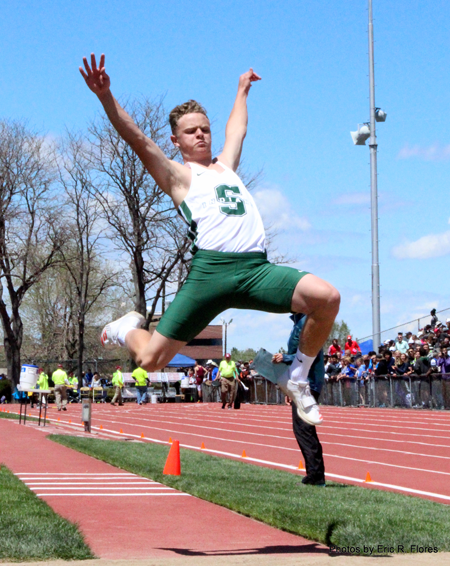 Sanford's Brady Lenz soars through the air in his triple jump attempt on Saturday. 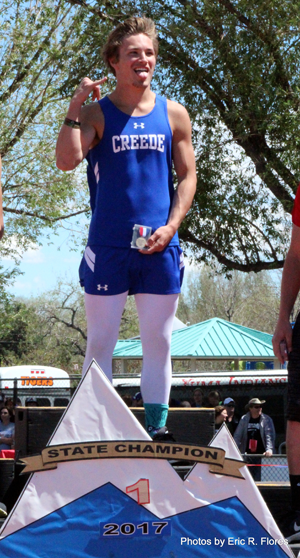 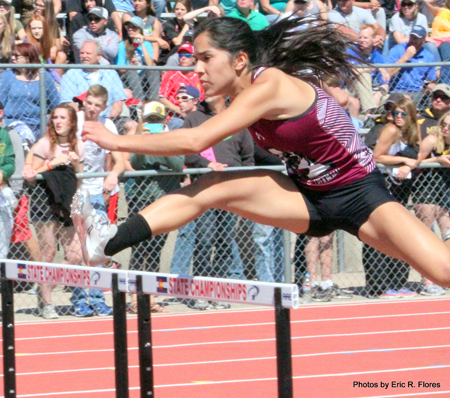 Jessica Archuleta soars over the hurdles as she placed in the 100 meter hurdle finals on Sunday. 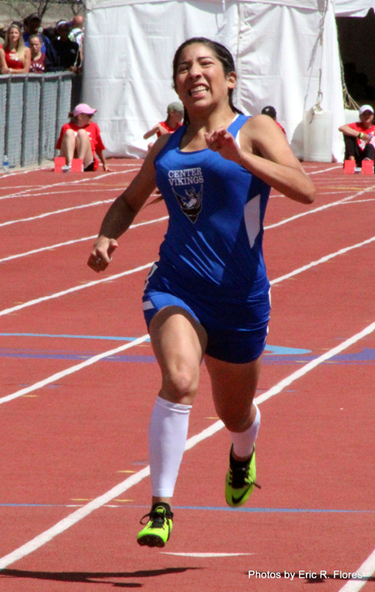 Center's Malyka Medina fights to the finish line in the 100-meter dash on Sunday. 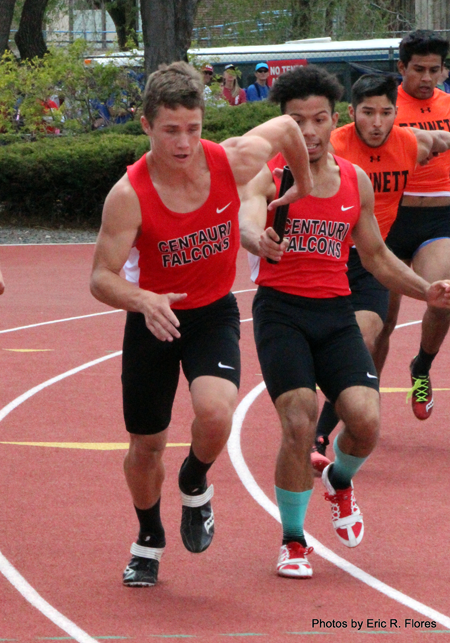 The Centauri 4x100 meter relay executed a perfect hand off in the first exchange on Sunday. 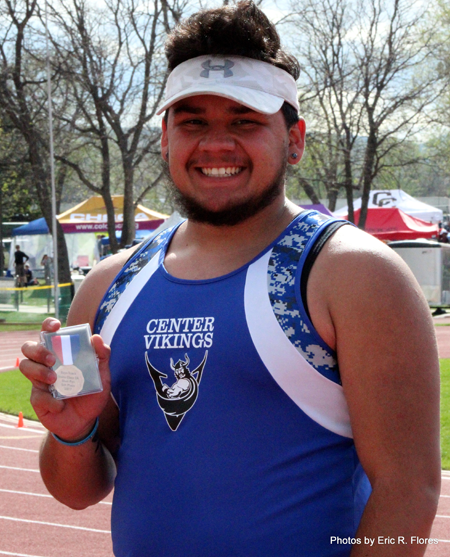 Joseph Sierra proudly shows off his medal that he won in the shot put on Sunday.