Ry Adams is good for 19 as Alamosa boys start season on right foot.

Ry Adams releases a shot from 3-point land. Adams was 46 percent from the field to lead the Mean Moose with 19 points.

VALLEY — Southern Colorado’s Basketball’s Seasons are off to a roaring start. For the opening week Centauri, Sangre de Cristo and Alamosa were all hosting tournaments while Center, Del Norte, Antonito, Sierra Grande, Creede and Sargent were in attendance.

Monte Vista was taking part in the Bennett Tournament. The girls met and defeated Lutheran by a score of 60-50 and they will play again tomorrow at 3 p.m. 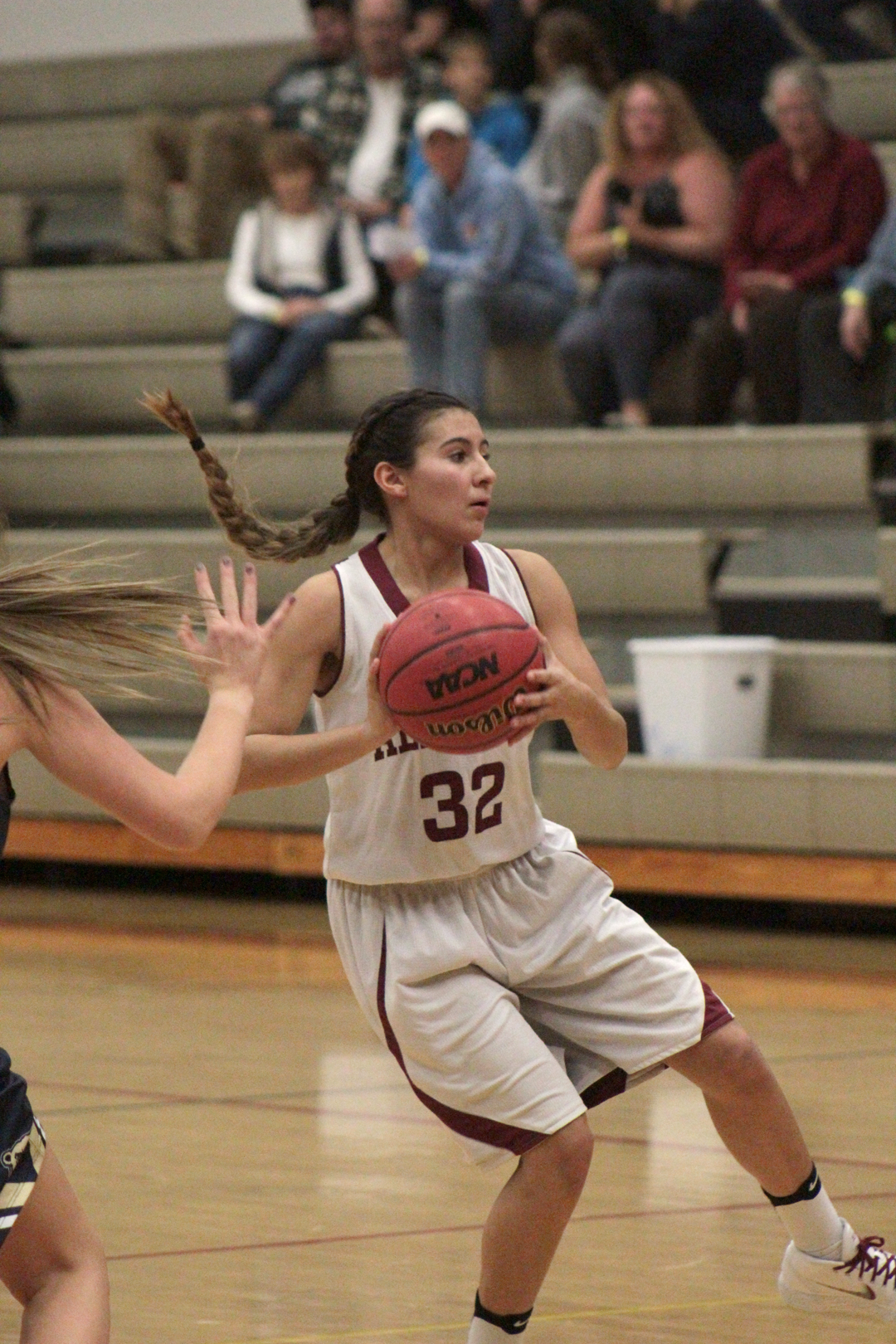 Terese Chavez looks to fire a pass to the perimeter in the 4th quarter against Palmer Ridge. The girls were out paced falling 25-42.

Alamosa played host to their own tournament with both the girls and boys facing Palmer Ridge.
Up first were the girls, they couldn’t seem to get out of their own way suffering from turnovers and traveling calls putting up 9 points in the first half. The girls seemed to fix errors in the second half but it was too late as they would go on to fall 25-42.

The boys closed out the night with a 56-31 win. Ry Adams put in a productive game, leading the Moose with 19 point getting 14 of those in the first half. Adams was also efficient from beyond the arc hitting on 41 percent of attempted 3 pointers. Chad Jackson tailed Adams in points with 13. Jackson was 66 percent from the field and perfect on his free throws going to the charity stripe twice. Alamosa will face Montrose tonight the girls starting at 6:30p.m. and the boys at 8 p.m. 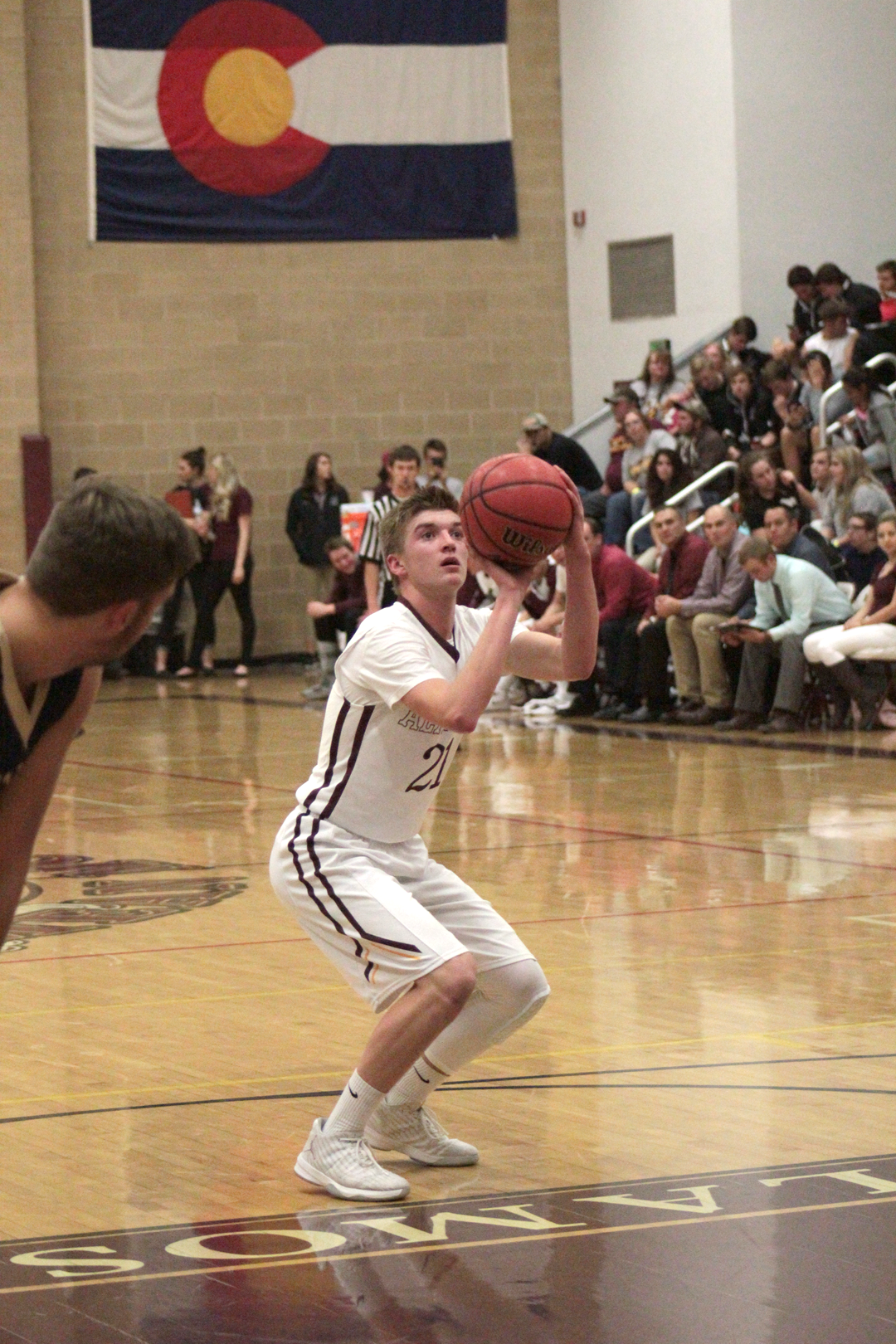 Chad Jackson puts up a free throw in Thursday night's win over Palmer Ridge . Jackson was 100% on his two visits to the line going a perfect 4 for 4.

In Mosca, Sangre de Cristo started the season with the Thunderbird Shootout. It featured teams such as Creede, Centennial, Sierra Grande, and Antonito. For the girls the Thunderbirds defended home court against Ouray with a dominant 62-16 victory to advance to the next round. Creede’s 38-27 victory over Centennial moved them to the next round as well making for a valley matchup between Creede and Sangre de Cristo tonight at 6 p.m.

Antonito defeated Sierra Grande 60-34 and will face Cheraw in the next round Friday at 2:40 p.m. With identical matchups the Creede boys also defeated Centennial for a second round game slated for 7:40 p.m on Friday. While the Sierra Grande Panthers defeated Antonito by a score of 73-40 to advance for a 4:20 p.m. Friday game.

Meanwhile down in La Jara Centauri hosted the Mountain Top Tournament featuring  the likes of Sargent, Center and Del Norte. Centauri’s girls got the better of Sargent with a 49-20 game. Olathe’s victory over Center has them scheduled to meet Centauri in the second round at 5:30 p.m. tonight. Both Del Norte’s boys and girls advanced to the next round with victories over Las Animas. The Tiger boys and girls will be playing tonight at 4 and 2:30 p.m. respectively.