ALAMOSA — After over four years of planning, yesterday's groundbreaking has officially started the countdown towards the new Alamosa County judicial center.

"He built this pad here in his extra time and saved the county a ton of money by jumping out here and doing a spectacular job," said Allen. "Thank you, Tim."

Twelfth Judicial District Chief Judge Pattie Swift took to the podium next and explained the background of the justice center. After conducting a space study they determined that the new courthouse needed three times more space as they currently have. The original building, located on Fourth Street and built in the 1930s, has multiple unsecure entrances and a lack of elevators causes issues for those with disabilities.

"As beautiful as the old courthouse is," Swift said, "unfortunately we've outgrown it."

The county-appointed justice center task force—of which many members were present at the groundbreaking—met for the first time in April of 2013. They selected Reilly Johnson Architecture to design the new building and jail expansion. 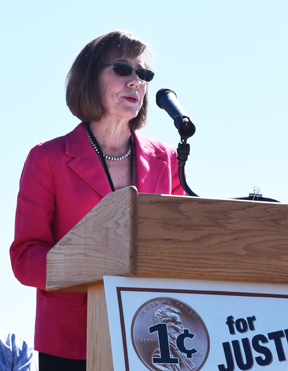 The committee then recommended that the commissioners put a 1-cent sales tax on the ballot to fund the projects, which they did in November of 2015. Although the courts are a state agency, under Colorado law it is the county that has a legal obligation to provide an adequate facility.

While the tax contributes, the county also had to ask for additional funding from the Underfunded Courthouse Facility Commission and Colorado Department of Local Affairs. The entire estimated cost of the justice center and jail expansion is $26,596,358 and GH Phipps Construction Companies was selected last month to build the courthouse.

"It isn't fancy," Swift said, "but it meets our needs now and into the future. It provides a safe courthouse for the public and staff. It truly will be a building that Alamosa County can be very proud of."

Alamosa County Sheriff Robert Jackson spoke about how necessary the additional beds will be. In early 2015 they had 75 and Jackson said that yesterday's count was 140, with 92 percent of the crimes being related to heroin. It costs roughly $1,800 to house the overflow in other facilities. 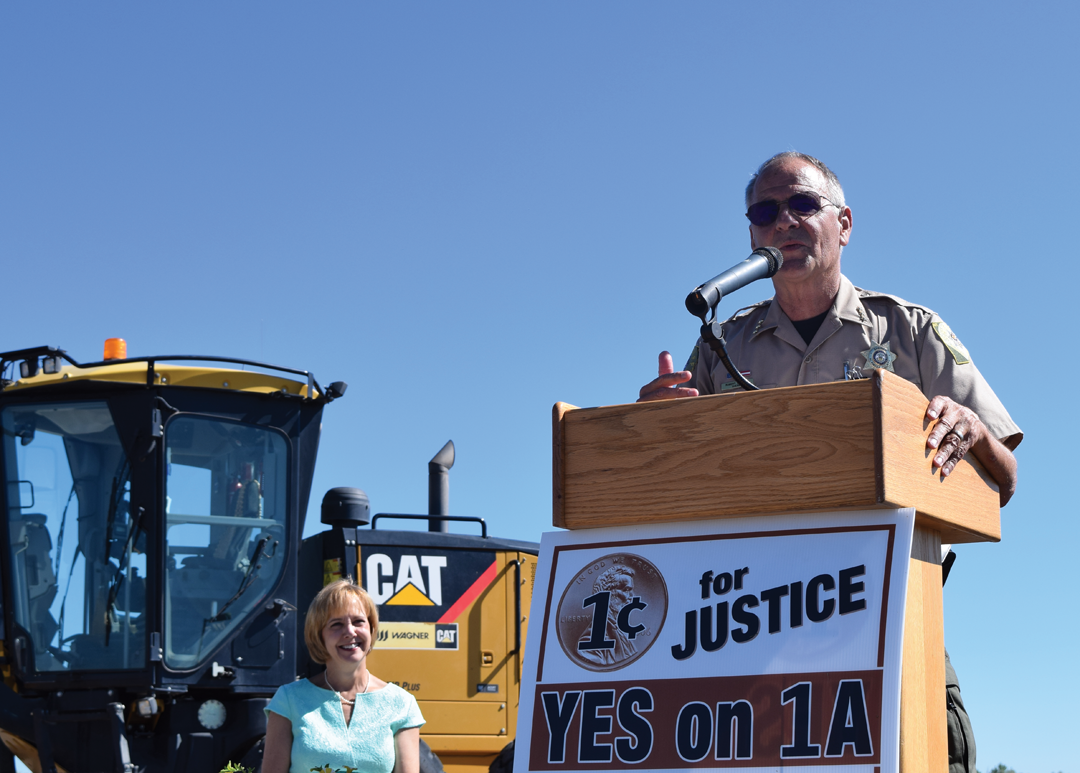 Jackson also thanked Bob Van Iwaarden of Van Iwaarden Builders Inc. for working on the jail. "He's about 30 days into it and he's a class act," Jackson said. "They're either ahead of the schedule or on schedule. In about 400-500 days we're going to have an additional 74 beds."

Alamosa County Administrator Gigi Dennis thanked all of those involved, especially those who raised money to campaign for the ballot issue.

"It wasn't very popular to talk about," said Dennis. "People would shy away. When you ask them to take a yard sign they'd put it in the border of their yard between themselves and their neighbor."

According to Dennis a survey said that only 42 percent of the population would vote in favor of the increase while 51 percent would vote against it. Instead it passed by more than 200 votes.

"Taxes are never popular," added Alamosa County Commissioner Michael Yohn. "Thank you to the citizens of Alamosa for supporting this 1-cent for justice, for everyone involved in the project and for everyone who shops and spends money in Alamosa."

Alamosa County Commissioner Helen Sigmond spoke about former commissioner Marianne Dunne, who died last July. Sigmond was picked to fill in her vacancy on the ballot and then served before being elected in November.

"She worked tirelessly on these projects and she attended numerous public meetings," Sigmond said. "Her energy was contagious. She was truly concerned about all of the citizens of Alamosa. I have been blessed to continue her legacy and think of her often and her commitment to citizens of Alamosa County.

"I know she's smiling down on us today and the good weather is definitely proof of this."

Allen closed the ceremony by also thanking the taxpayers and constituents.

The new facility, located just across the street from the county offices, is expected to be finished in approximately 15 months.