MONTE VISTA— The annual Wreaths Across America event was held on Sunday, Dec. 17 at the Homelake Veterans Cemetery. The original scheduled date was Saturday, Dec. 16 to coincide with the national ceremony but there was a delay in delivery of the wreaths this year.

“We had a record number of volunteers come out to help lay wreaths this year. More than 100 people came out on Sunday to help. There was a delay in the delivery of our wreaths this year but the support we received was overwhelming. Carol Martinez once again organized the event and Patty Robertson, retired Air Force, was our speaker for the ceremony following the placing of the wreaths,” said Pam Self, admissions and marketing director for the Colorado State Veterans Center at Homelake.

Robertson’s speech was even a bit more special this year. She officially retired from the Air Force after 33 years of service to the Air Force and National Guard. Speaking from the heart, Robertson reminded attendees to cherish the holiday season and to live in the moment. She encouraged everyone to rejoice for the time they have to spend with family and friends and to remember and honor all those who were in the graves with wreaths surrounding the crowd on Sunday afternoon. Attendees were told to remember the sacrifices that all veterans and their families give to the United States of America.

Wreaths Across America is a national organization that places wreaths on the graves of veterans every Christmas season to honor fallen heroes and visit graves that may be forgotten. It was started by Morrill Worcester, owner of Worcester Wreath Company. Worcester visited Arlington National Cemetery when he was a 12-year-old paper boy and won a trip to Washington D.C.

According to the Wreaths Across America website the visit left a lasting impression on Worcester throughout his life. As an adult and owner of Worcester Wreath Company, in 1992 the company found themselves with a surplus of wreaths. With assistance from Senator Olympia Snowe the extra wreaths were placed in areas of Arlington National Cemetery that had been receiving fewer visits with each passing year.

This tribute went on quietly for several years. In 2005 a photo of the wreaths was circulated around the internet. Suddenly, many state veterans cemeteries wanted to participate and have wreaths for their fallen. Throughout the following years it became clear that the thought had become bigger than one cemetery and one company.

In 2007 Wreaths Across America was officially formed into what it is today. The mission of the group is to “Remember, Honor, Teach” about our nation’s heroes. It has now grown to include thousands of locations in the United States and beyond and places close to one million wreaths throughout the country including here in Monte Vista.

Caption: Wreaths were laid on headstones at Homelake as part of Wreaths Across America/Courtesy photos 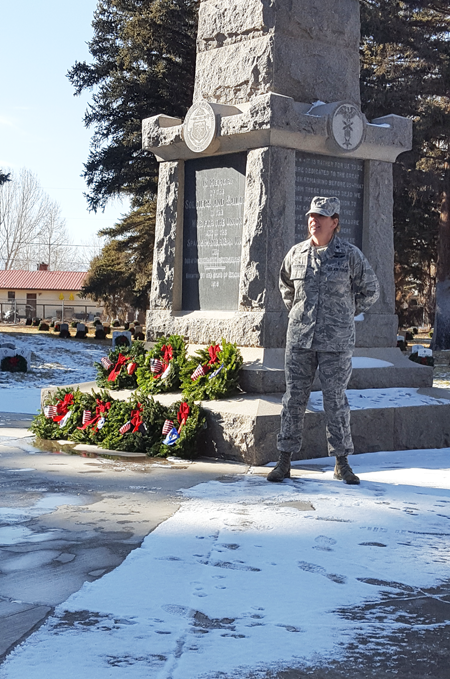 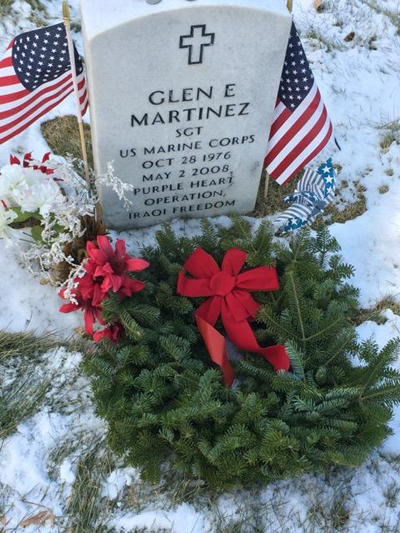 A wreath is laid at the headstone of Glen E Martinez.