ALAMOSA — A decade ago a family-run barley farm was facing bankruptcy. Now, because of their perseverance, Alamosa is home to a brewery arguably unlike any other on the planet.

Today the Colorado Malting Company opens the doors to Colorado Farm Brewery, which produces pints of beer entirely made from ingredients harvested on their farm. Along with the barley grown and malted onsite, aquifer-supplied water, yeast captured from the air and hops flowering on small trellises come together to form a purely local brew.

"As far as I know we're the only people in the world doing it," said head brewer Josh Cody.

Being a founder of the malting company Cody, 35, would be the one to know. While many farmhouse breweries in places such as Germany and Belgium grow their own hops or spices and fruit like cloves and oranges, it is rare for them to malt the grain. Instead it's shipped to a third-party such as the Colorado Malting Company, who regularly sells their malt to a clientele of roughly 35 other companies around the world.

"We're not the only people trying to get here," Cody said, "I think a lot of people would like to be able to do this, but since we had the malting company first we kind of worked towards the brewery. Others start with the brewery and try to work back and it seems to be much more difficult."

CMC will still malt for larger companies such as Sierra Nevada Brewing Company, New Belgium Brewing Company and Goose Island Beer Company since their six-barrel operation will use no more than 2 percent of the two-circle farm's one million pound yield.

"With this little brewery we can take a small percentage of what we produce and create something very unique and hyper-local here in this taproom." 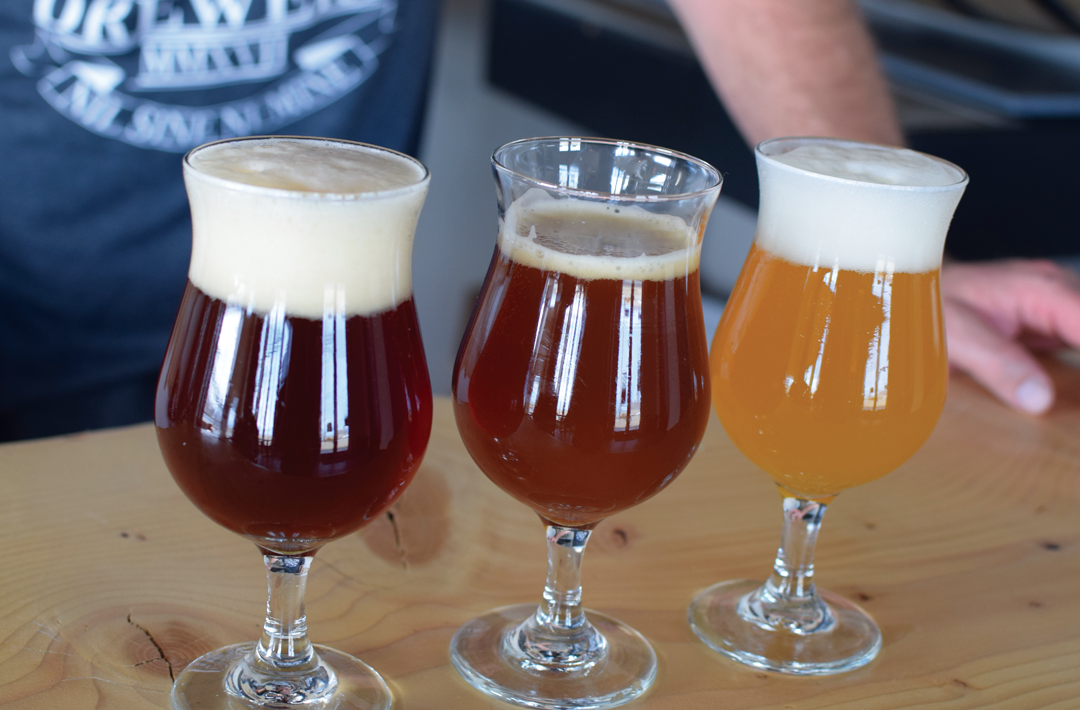 On tap now are the Colorado Farm Brewery's own brown ale, left, along with Batch 2 and Batch 1, two variations of their flagship Belgian beer.

In addition to the ingredients, what makes Colorado Farm Brewery stand out is how they mimic the wine industry's "terroir"—French for "land"—culture. Each year Cody plans on brewing only one beer based on what the harvest gives them.

"One year the grapes might be better or worse for a merlot so we'll do the same thing with the grain. If the wheat is really good maybe we'll brew a hefeweizen. It's all about the farm."

However, they will likely also sell variations of the brew, augmenting that year's "vintage" by aging it in barrels, fermenting it sour, or smoking it with cottonwood.

The inspiration came from Cody's time in Scandinavia with CMC working on a collaboration beer in Finland. He saw that other farmhouse breweries limited themselves to one style, such as the Finnish sahti made with juniper berries instead of hops or a Norwegian alder wood smoked beer that used yeasty bread.

"Travelling to Europe reaffirmed what I believed could be possible. It was the seed for me that really made me think this was a viable opportunity."

One day in Denmark he picked up a beer, studied the label, and noticed it had the entire recipe printed on the bottle. "It tells exactly what they did," Cody said. "So I thought we should have a business that is about transparency, traceability, accountability. Let's just be what we are."

As one of those kids who couldn't wait to leave the San Luis Valley, using his foreign language skills to help the family business abroad drew Cody back home in 2015 after being away for about 10 years. Additionally, that tour is when Cody learned to expand his technique beyond rudimentary homebrewing. He switched paths from being a professor in graphic design at Concordia University and started studying fermentation sciences on his own time.

Cody is passionate about the craft and learns as much as he can so that his wife, three sons and three daughters—ranging from 2 to 12 years olds—have a legacy to inherit.

"I have a lot of risk being the sole provider for eight people," said Cody. "I don't have time to not take it really seriously and make sure I do a good job. It's weird when you grow up somewhere you don't really appreciate it until you leave for a while, but now I hope that maybe someday my kids will be the fifth generation to work on this."

Though CMC has been around for a decade, the Cody family story goes back further to 1934 when Josh's great-grandfather Ray—who had the last name Coody back then—settled in Alamosa with his family. What is now two circles was 2,000 acres during the barley farm's peak.

Save for a few years of raising dairy cows, the Cody farm has mainly grown grain for Coors Brewing Company. Yet, the economy took its toll and portions of the land were sold off to get by. When the property around the original homestead where Josh's parents still live got smaller and smaller, his late grandmother Phyllis got the idea to switch to malting. It was a frightening proposition. However, they knew the farm wouldn't last another year.

"My mom had made the arrangements to sell the farm after my dad passed," said Josh's father Wayne, pictured above with Josh, "and she couldn't go through with it. It was just more than she wanted to do. It was almost a bankrupt mess at the time and it just started from there."

They converted the milk tanks to malt tanks and initially CMC was giving their product away to local breweries. Enjoying the fresh and local grain, San Luis Valley Brewing Company and Three Barrel Brewing Company became their first customers.

"Since then it's gone crazy," Josh said. "Now we have five of the big vessels and still use the original little tank sometimes."

"If it hadn't been for the malt company we wouldn't be here," added Wayne.

That history is present in every facet of the taproom located at 2070 County Road 12 South. Housed in the homestead's shop from the 50s, it pays homage to the family saga with photos of the four generations adorning the walls and refrigerator. 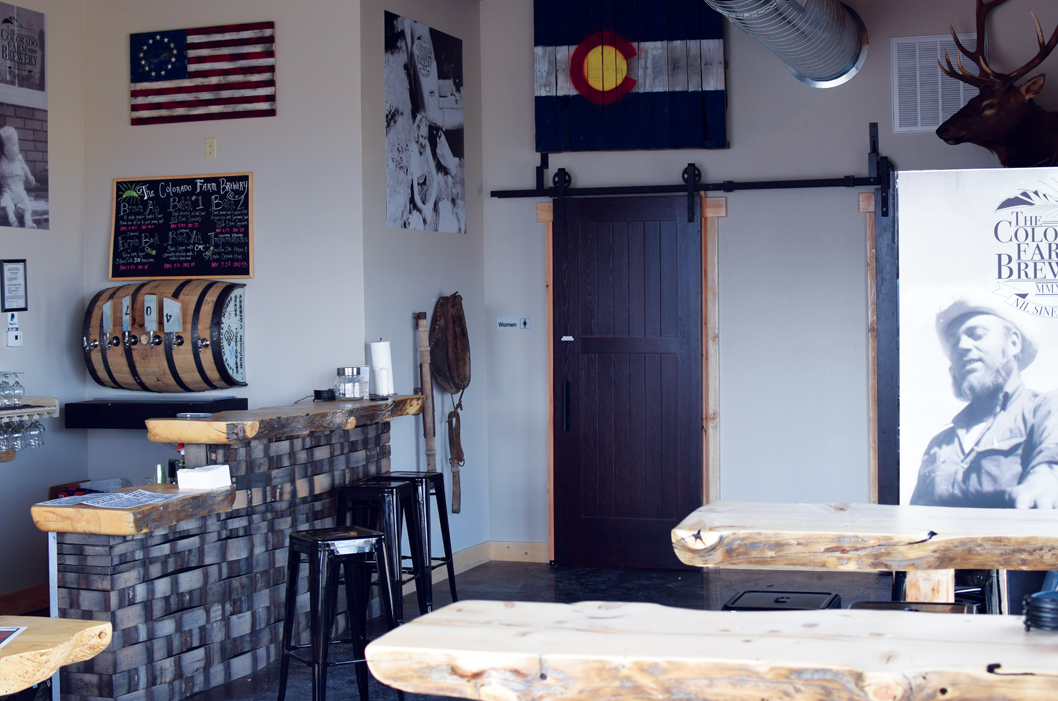 Next to the bar hangs the collar from the mule that belonged to Josh's grandfather. Not having tractors at the time, mules were used to prep the 80 acres of chico bush for farming. The bar itself—along with the tables, countertops and wood trim—are crafted from a single tree that grew on the property until a gust of wind knocked it over.

In a modified Laws Whiskey House barrel, one of CMC's 10 distillery clients, sit six taps. On tap now are two different versions of the flagship Belgian beer, Batch 1 and Batch 2, a brown ale made with commercial yeast and a trio of collaboration beers brewed with Three Barrel Brewing Company and Crestone Brewing Company. Once the brewery selects a final recipe for their beer the remaining taps will be open to CMC's clients such as Alamosa's Square Peg Brewerks and Longmont's Oskar Blues Brewery.

While the brown doesn't use all ingredients harvested from the estate, Batch 1 and 2 both use the wild yeast found naturally in the air. Additionally, Batch 2 uses wheat and smoked caramel malt to give it a color and flavor contrasting from its sibling.

Though Cody didn't grow enough hops to sustain the 100 percent local ingredient list beyond a few batches, he wishes to have the infrastructure in place soon. The San Luis Valley's climate is not ideal to grow hops like the Pacific Northwest or Germany so Cody focuses on hearty varietals such as Cascade and Centennial hops.

"Hopefully by the middle of next summer when you come out to have a beer you'll find a whole row of hope trellises out here," Cody said. "The view from the tap will be beautiful green hops, gold grain and the mountains."

Like Californian vineyards, Cody wants to instill a sense of agritourism in the region by raising awareness of what the Valley offers. He knows it takes effort to make the trip south of town but hopes people will understand that it's worth it to drink ale next to the barley field that made it possible. A fire pit, checkerboard, food trucks and eventually horseshoes invite customers to slow down, tour the facility and enjoy the beer garden.

"The intention is to taste this area of the state. Anything we do here will be for this brewery, specifically designed around this elevation." For those that can't make it, however, Colorado Farm Brewery will be bottling beer and distributing kegs to local bars.

No matter where you drink it, all Cody cares about is that you enjoy drinking the authentic brew as much as he did making it.

"I hope this can afford me, my family, and the Valley a place to come and enjoy what nature has, because life is too short to not have fun with what you do."

Hours: Initial hours of operation are 5 p.m. to 10 p.m., Thursday through Saturday. The brewery will expand hours after their grand opening in April.