ALAMOSA — In his bicycling trek across the U.S. Kazuhiro Tamada, 22, from Japan has encountered snowstorms, freezing conditions, isolated roadways — and U.S. hospitality.

Checking in with Kristi Mountain Sports in Alamosa to fix a broken spoke and discovering he also had a split rim, Tamada spent two days this week with the Erwin Young family while he waited for parts and repairs to his bicycle. It hasn’t been the first time he has found shelter and American hospitality during his cross-country trip, and thanks to a network of church-related contacts, he already had a place to stay Thursday night as he headed towards Wolf Creek Pass.

Tamada, who is from Fukuoka, Japan, began his trip on January 1 during a big snowstorm in New York and plans to finish at the Golden Gate Bridge in San Francisco on March 16, a trip he estimated at about 1,875 miles.

“Outside camping wrong time,” he said about his initial “lodging” in New York, “very cold.”

One of his first Facebook posts, translated, reads, “My hair is freezing in a few minutes.”

Along the way he has camped in parks and playgrounds but has also enjoyed the warmth of strangers’ homes like the Youngs’.

While going through Nebraska, his post translated, “Everyone in Nebraska is gentle!!”

Carrying a tent and everything else he needs with him on his bike, Tamada camped at Niagara Falls and cycled through part of Canada before coming back into the states. He has traveled through Detroit, Chicago, Des Moines, Omaha, Lincoln, Goodland, Colorado’s southeastern plains and from Walsenburg across La Veta Pass to Alamosa. He was especially excited to see the mountains.

He said that the timing of his cross-country bicycling tour was not because he wanted to ride the route in winter — although he said it is a trailblazing effort — as much as it was the only time he had to do it, between graduating from college and entering the world of work.

Tamada graduated with a sales and marketing degree and will be going to work for Dunlop Tires when he returns to Japan this spring. He said he went on a bicycling trip around Japan last year on the same bicycle he is taking cross-country in the U.S.

He is well prepared for his trip with everything from a sleeping mat and tent to GPS and music to listen to as he bikes.

Even despite the wintry conditions along much of his route, Tamada is taking in some of the country’s famous sites from Niagara Falls to the Mississippi River to his next scenic destination, the Grand Canyon.

As he posted when he entered Colorado and began heading west, “look forward to it!”

Captions: Kazuhiro Tamada checks and loads his gear with the help of his Alamosa host Erwin Young, right, before getting back on the road on Thursday./Courier photos by Ruth Heide 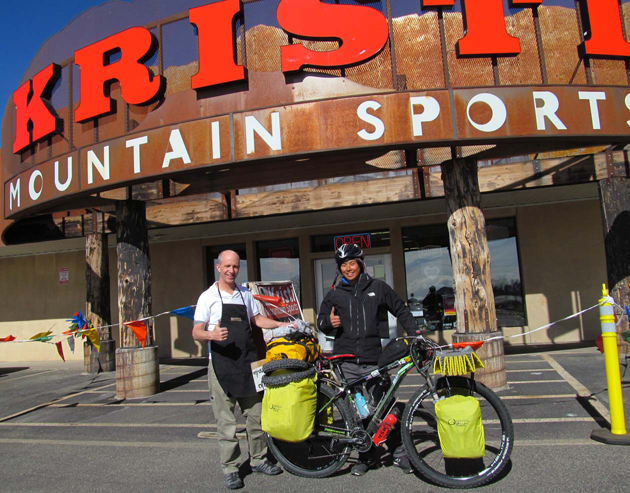 Eric Burt, left, of Kristi Mountain Sports, gets Kazuhiro Tamada safely back on the road after fixing a broken spoke and split rim.