ALAMOSA — A Front Range food dish is making its way downstream to the Valley. For years there were no restaurants that served sushi—a food item that usually consists of raw seafood and seasoned rice—yet now there are three.

Having just passed their inspection on Tuesday, Rhybax Kitchen is the newest to serve sushi. They began making cooked rolls as a pilot test on weekends, but the demand now has them serving it shortly at lunch and dinner daily for $10 per roll or less. Owner and head chef Dante Tripi, 35, has been making sushi for 10 years.

"For the first six months all my mentor would let me do was wash rice," said Tripi. "I wasn't even allowed to cook it. Slowly but surely he would let me cut the cucumbers, or let me mix the [vinegar] with the rice. And it took off from there."

Before Tripi was an executive chef for one of Roy Yamaguchi's restaurants in Tampa, he was the executive sushi chef.

As he does with the rest of his restaurant, Tripi likes to keep a small changing menu that has both traditional items and unique creations.

"We're trying to break the ethnic boundaries where we take something traditional from one country and mix it with another," said Tripi. "We don't want to be a sushi restaurant per se, but we want to be able to showcase the best of those rolls and dishes."

Rhybax's Philadelphia roll is filled with the normal smoked salmon and cream cheese but he'll top it with bacon and a Korean chili paste called gochu-jang. Their volcano roll is topped with spicy tuna seared with a blowtorch and three sauces: eel, sriracha and chili oil. 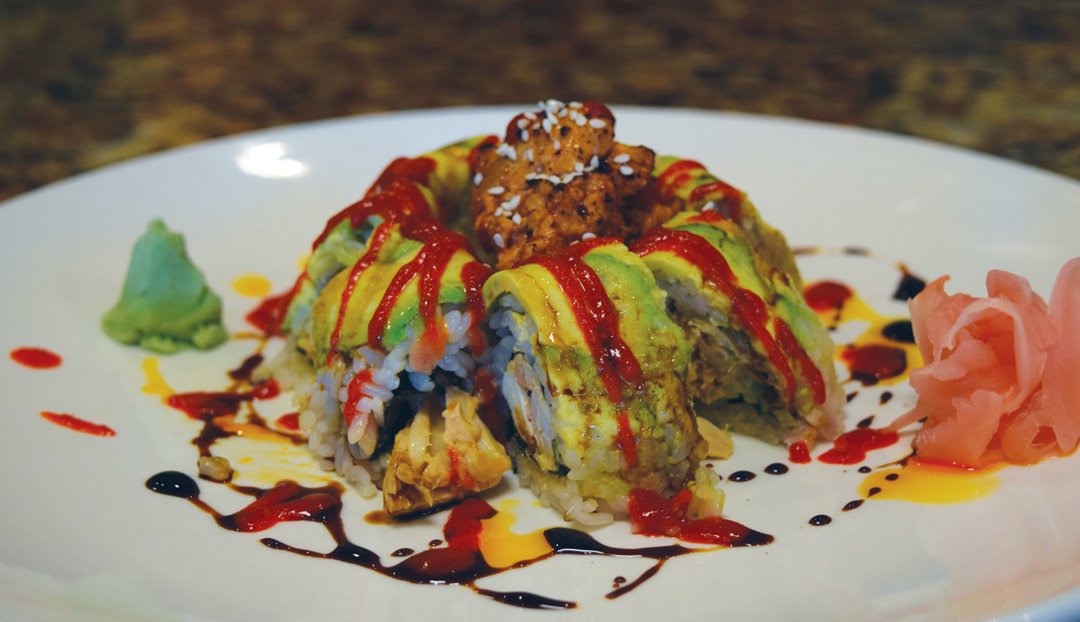 His favorite, however, is the rainbow roll, a variant of the California roll. "All that fish, avocado and crab. That's the heaven roll right there."

Though the quality of fish matters, in Tripi's mind it's all about the rice and how it's seasoned.

"All too often when I go out I can tell if they just use plain rice wine vinegar," Tripi said. "Only like five people know the recipe I use total. I make it before anyone gets here. It's kind of like a coveted thing."

The total process, from rinsing to cooking, takes him 90 minutes. Tripi was even reluctant to put sushi on the menu in the first place.

"I have such a big heart for it being perfect and it being done the right way."

The general public might be wary of consuming something uncooked, but that's why local health departments test each establishment. The attention to detail for the rice is important since it's a major component of the inspection. Not only does the vinegar, called sushi-su, improve the flavor of the rice, but it also preserves it.

Rice can't be stored hot or cold or else it won't roll properly. The chef's recipe of sushi-su keeps the rice's pH at 4.6 or lower so that bacteria won't grow.

In previous years samples had to be sent to the University of Colorado for an expensive pH test. With the rise in sushi's popularity that's no longer the case.

"This might be one of the reasons why we're seeing more sushi," said Lynnea Rappold, the regional environmental health specialist for Alamosa County Public Health Department. "It's really easy and costs $20. All you have to do is take a couple of samples to the public health department in El Paso County and you'll get your results before you leave."

Though Alamosa isn't near the ocean, finding fresh fish isn't a problem for the restaurants. The chefs can get the fish they need from specialty suppliers from Denver or Honolulu. Even larger suppliers like Shamrock Foods will have a small selection of sushi-grade meat available because of the trending food.

The restaurants also have the option of buying pre-frozen fish with the parasites already killed. If they go that route then each pre-frozen fish has to be marked and have an accompanying invoice and letter.

If a restaurant fails a test they can try again without penalties, as long as it's not available on the menu until the rice or fish passes.

"We don't want to affect people's businesses," said Rappold. "We want people to succeed and to support them to serve safe food. I would never say that a facility would have to close because their sushi rice didn't pass."

The other new restaurant serving sushi in Alamosa is Thai Hut, which put rolls on its menu on Jan. 14. Sushi chef Soranai Srasom, 39, has been preparing sushi for 20 years.

Before coming to Alamosa he worked as the sushi chef at House of Siam and Lemongrass restaurants in Delray Beach, Florida.

"In our restaurant in Florida we did a combination of Thai food and sushi too," said Srasom. "It gives more options for the customer."

The most popular roll is the top model roll ($14.95), what Srasom previously named the I-95 roll back in Florida. Inside is spicy tuna, tempura fried shrimp and avocado. On top are pieces of crab, spicy mayo, eel sauce, and flakes of tempura batter. It was the first roll Srasom created 12 years ago.

Yet Srasom is especially fond of his Siam lobster roll ($25.95). Made with a whole lobster tail fried in tempura, the dish is served in a martini glass and plated with the lobster's shell. 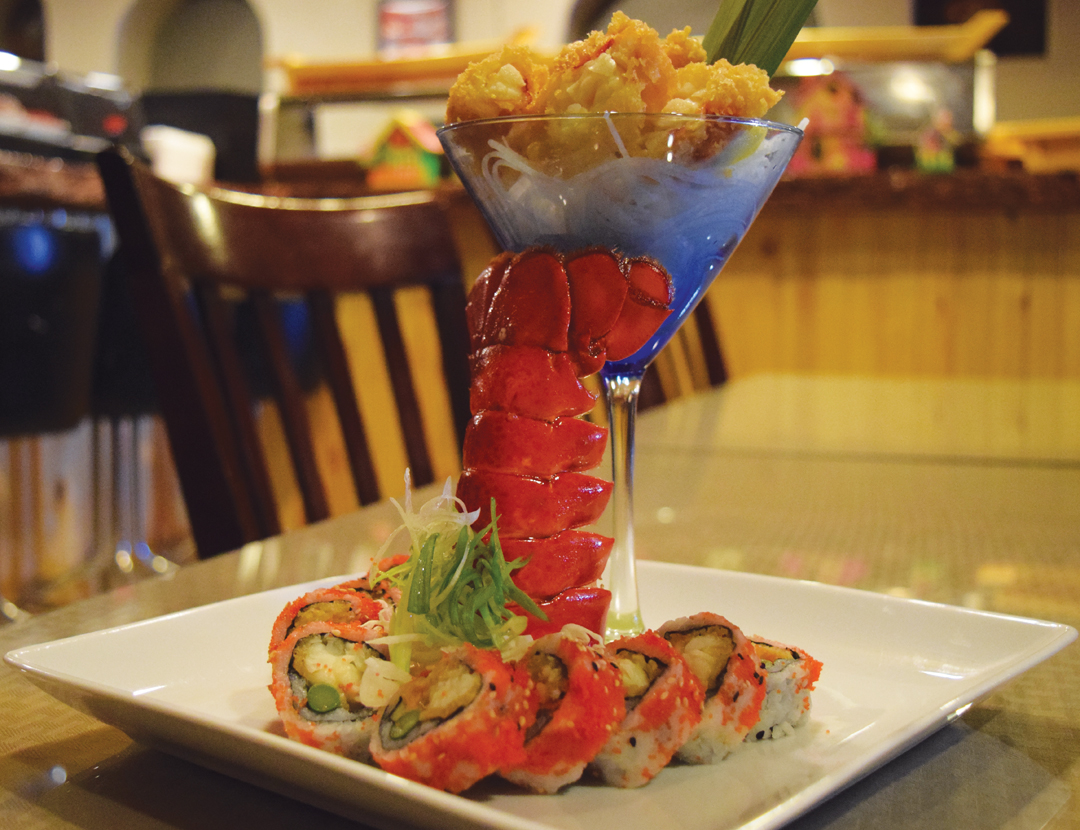 "It's very popular because of the beautiful presentation and it tastes really good," Srasom said.

Hunan Chinese Restaurant, which opened in 1986, is both the oldest restaurant that features sushi and the first to do so. Customers could enjoy the fish dish in 2003.

"I thought the timing was right," said restaurant owner Chuck Hsu, 52. "Thirty years ago it wouldn't have been right. Now it's caught on. People bring friends over and introduce it to them and then they bring their friends. Once you're addicted to sushi you can never go back."

Though he has been making the dish since high school, it wasn't until roughly four years ago that he became the sushi chef at his own restaurant after the previous chef left.

Hsu prefers the more traditional rolls, like the tuna roll ($5.95). "The western people are different because they love those sauces," Hsu said. "I like simple stuff. A piece of tuna is fine with me." However, he'll experiment with more daily creations and changes the menu periodically.

"We run specials and if it does well then it will end up on my menu. Most of them don't make it."

Like Tripi, Hsu takes pride in his rice. "No one does it except me," he said. I won't let anyone else do it because I don't trust them.

"Ninety percent of sushi's flavor comes from the rice. You can slap a piece of fish on there but if you have rice that doesn't taste good, you're going to have bad sushi. That's just the bottom line."

Now that Alamosa has three restaurants that serve sushi, will the Valley ever see a stand-alone sushi bar? Only time will tell.

"It could happen," Rappold said. "Colorado is growing. Our little community is seeing the trickle down of that. Denver is full and people are coming here because there is a lot of opportunity. The more businesses that we can help grow and thrive, it helps us too."