ALAMOSA — It takes more than an individual to tackle the opioid epidemic, which is why an 11-person panel shared their holistic initiatives at Communities That Care's substance abuse forum at Ortega Middle School on Tuesday evening.The experts ranged from law enforcement to lawyers, to victim advocates and more.

The discussion began with Arturo Garcia recounting his experience with the 12th Judicial Drug Court. As one of the first graduates of the program, Garcia has been two years sobers after struggling with addiction for eight years. He credited the court's mental health classes and availability of probation officers for raising his self-esteem.

"Even the people that are using are great people, they just made bad decisions," Garcia said.

District Judge Michael Gonzales added that the program's goal of rehab is a universal one. "We're not trying to put everybody in the department of corrections," he said. "We can't force them to stay sober, but we can provide them with support to become good parts of our community. "

Alamosa Police Chief Duane Oakes, pictured above at the right with Alamosa County Sheriff Robert Jackson and Adams State University Police Chief Andrew McPherson, mentioned how the new Law Enforcement Assisted Diversion (LEAD) program reduces recidivism by referring low-level drug offenders to the Center for Restorative Programs instead of putting them in jail. Currently the program only exists in Alamosa County, but Oakes hopes to make it available throughout the San Luis Valley within three years.

"Our goal is to get individuals the help they need to rather than putting them into a system that's like a revolving door," said Oakes. "The total criminal justice system has evolved to where we have got to get the citizens of our community the help that they need to stop this problem."

With those referrals, the LEAD program will lower the overcrowded jail population and let offenders keep their Medicaid for mental health services. A large percentage of the inmates at the jail are addicts and a majority of them are pre-sentencing.

"My jail is not the place for detox," said Alamosa County Sheriff Robert Jackson. "This LEAD program will help us and point us in the right direction."

Public Defender Amanda Hopkins and Chief Trial Deputy District Attorney Ashley Fetyko each cleared up the misconceptions that they either want to do nothing but set criminals free or jail every single offender. Both offices assist with Drug Court and LEAD programs.

"We want to support our clients in finding quality long-term success and sobriety while protecting our client's constitutional human rights," Hopkins said. "We live here and want, just as much as the rest of you, to live in a happy, healthy, community." 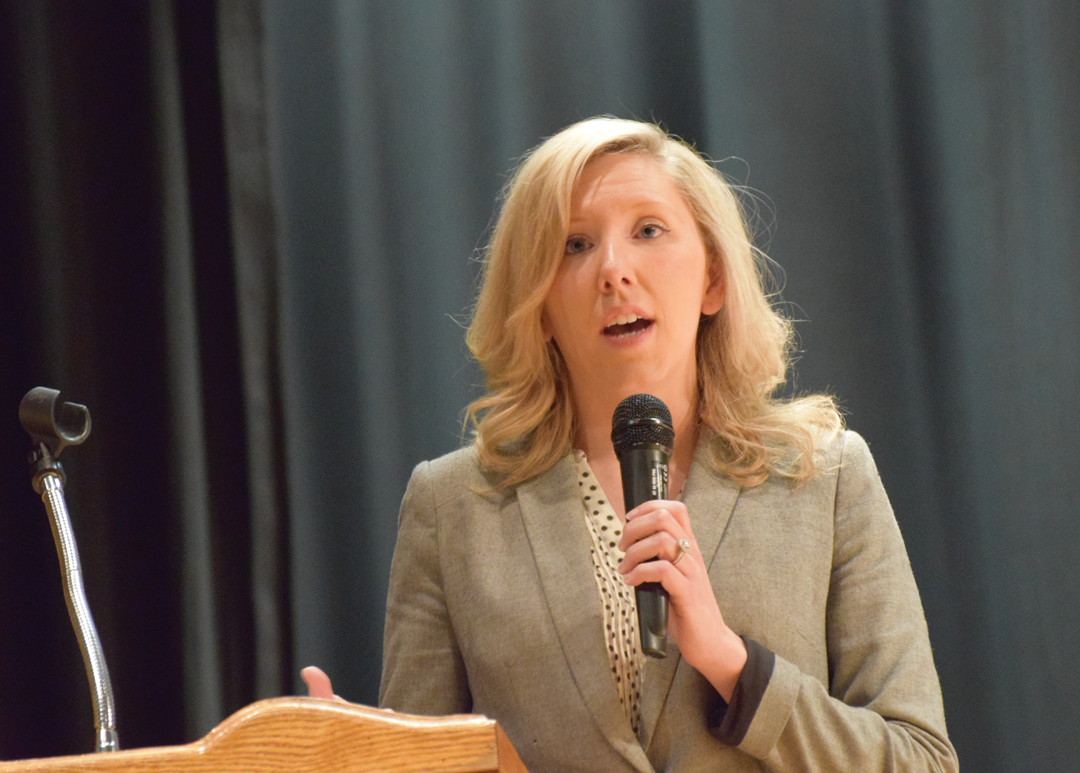 Fetyko, pictured, added that while felony filings are increasing each year and they actively prosecute high-level drug dealers, it is not necessary for them to pursue every drug case. Instead they work on creative solutions for the low-level offenders, like the LEAD program.

"We have to be mindful about community safety," said Fetyko. "If you're only thinking about a drug dealer who is selling meth to kids on a grand basis, you're ignoring the guy who is dealing with a substance abuse issue of his own."

During the question and answer portion at the end of the presentation the speakers informed the audience how the community could get involved. Both the victim's advocates and Neighborhood Watch programs are looking for volunteers.

"Nobody knows your neighborhood like you do," said Alamosa Police Sergeant Orlando Dordan.

Additionally, a person can report suspicious activity anonymously by contacting dispatch at 719-589-5807 and San Luis Valley CrimeStoppers at 719-589-411.

Finally, if someone wants to get involved with CTC they can call Alamosa County Public Health Nurse Ann-Marie Peterson at 719-587-5191.

"This isn't something we can handle on our own," said Adams State University Police Chief Andrew McPherson. "It's going to take the entire San Luis Valley community to reduce this epidemic."